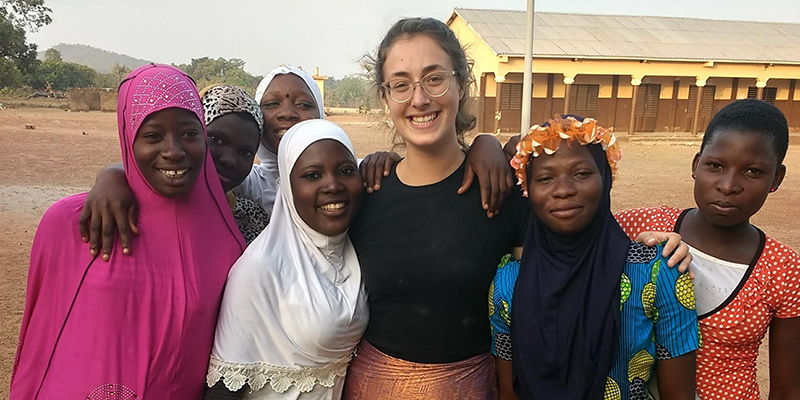 Peace Corps announced today that the University of Vermont ranked No. 6 among medium-size schools on the agency’s list of top volunteer-producing colleges and universities in 2019. There are 31 UVM alumni currently volunteering in countries around the world. Since the Peace Corps’ founding in 1961, more than 900 alumni from UVM have served abroad as volunteers.

UVM has ranked among the top 25 medium-size schools for over a decade. In 2018, UVM ranked No. 7. In addition, Vermont ranked No. 2 among Peace Corps’ top volunteer-producing states in 2018, while the Burlington-South Burlington metro area ranked No. 6 for the highest number of volunteers per capita.

“We have seen time and again that the colleges and universities that produce the most Peace Corps volunteers focus on cultivating global citizens in addition to promoting scholarship,” said Peace Corps Director Jody Olsen. “I am proud that so many graduates of these esteemed institutions leverage their educations to make the world a better place. They bring critical skills to communities around the world and gain hands-on, life-changing experience along the way.”

“This ranking confirms what we know about our students and alumni: they’re motivated, hard-working, and dedicated to making the world a better place,” said Tom Sullivan, UVM president. “We’re proud of their spirit, volunteerism, and accomplishments -- and to, again, be among the Peace Corps’ top producing universities.”

Molly Duff graduated from UVM in 2017 and is currently serving as an education volunteer in Benin, West Africa. “Even before starting at UVM I knew I wanted to eventually volunteer with the Peace Corps, however, I had no idea how to begin the process. The Peace Corps recruiter on campus and UVM alums helped direct me and now I find myself in a village in the wonderful country of Benin!” Duff said.

The Peace Corps ranks its top volunteer-producing colleges and universities annually according to the size of the student body. View the complete 2019 rankings of the top 25 schools in each category and see an interactive map that shows where alumni from each college and university are serving.