The Peace Corps announced today that the University of Vermont ranked No. 4 among medium-sized schools on the agency’s list of top 25 volunteer-producing colleges and universities in 2020, its highest recorded ranking. There are 45 Catamounts currently volunteering in countries around the world, reflecting an addition of 14 volunteers over the prior year.

Throughout the past two decades, the University of Vermont has ranked nearly every year within the top 25 medium-sized schools, and in the past eight years has maintained a position within the top ten. The university moved up from 2019, previously coming in at No. 6.

“These schools are institutions that emphasize being global citizens and service-minded students,” said Peace Corps director Jody Olsen. “I am excited to know the graduates coming from Peace Corps’ Top Colleges are using their skills to make a positive impact on their communities at home and abroad.”

“I’m very proud of UVM’s No. 4 rank—our highest ever—on the Peace Corps list of top volunteer-producing schools,” said Suresh Garimella, UVM president. “The ranking confirms what we know about our students: that they are highly motivated to make the world a better place and are deeply engaged in helping address challenges facing communities around the globe. Their good work also helps us expand around the globe UVM’s land grant mission of serving others.”

Since the agency’s founding in 1961, 954 alumni from the University of Vermont have served abroad as Peace Corps volunteers. The city of Burlington, Vermont, home of the university, is currently ranked as the No. 4 top volunteer-producing metropolitan area and the state of Vermont ranks No. 2, both on a per capita basis. 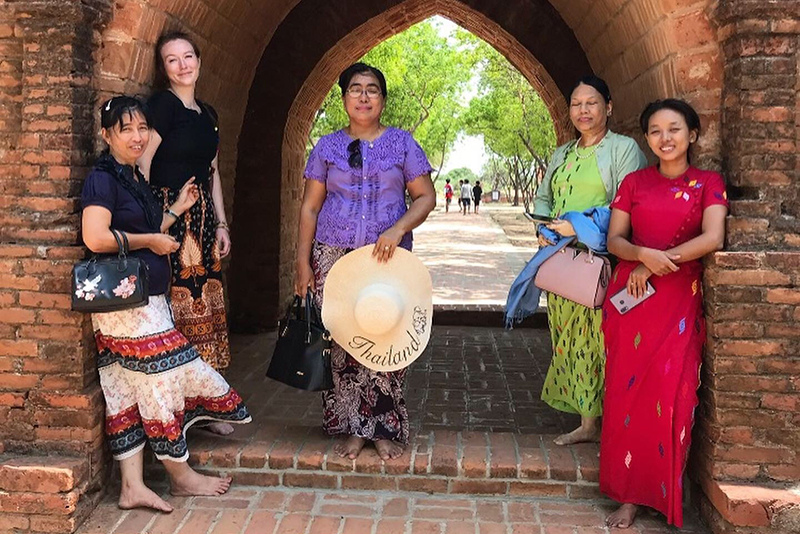 Brenna Lewis-Slammon (above, second from left) is a 2017 graduate of the University of Vermont, earning a Bachelor of Arts in English and a Bachelor of Science in Psychological Science. She is currently a Peace Corps volunteer serving as a secondary education English teacher in Myanmar.

“At UVM, I participated – as a writer, a dancer and an artist – in many creative and community-oriented spaces,” said Lewis-Slammon. “Most significantly, I worked at our Undergraduate Writing Center where I came to deeply value the connection that occurs through a shared process of understanding and creating. Here in Myanmar, I have been able to engage in a similar spirit of community-driven creativity with my teachers and students through writing workshops, class projects and performances at community events.”

The Peace Corps ranks its top volunteer-producing colleges and universities in three categories annually according to the size of the student body.