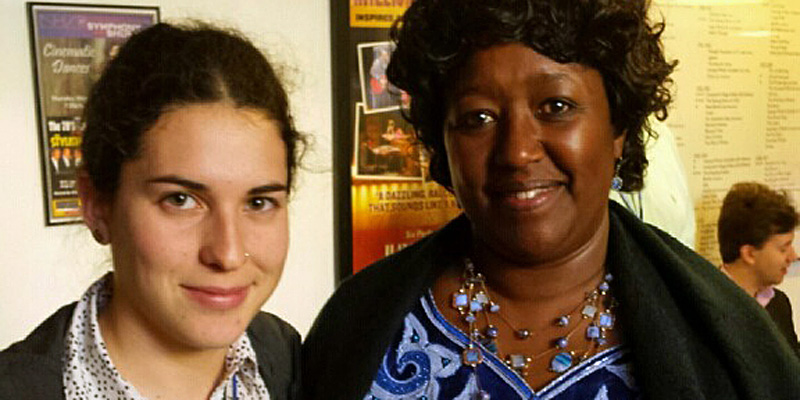 Just before this photo was taken in March 2015, Gabriela Sarriera ’17 dared to ask Rwanda’s minister of health for a job or internship or some way to contribute to the global health leader’s work. One year later, she’s living in Kigali, helping Dr. Agnes Binagwaho research policy that affects equal access to healthcare. (Photos courtesy of Sarriera)

As one of six kids, Gabriela Sarriera '17 is practiced in the art of speaking up and asking for what she wants. So when the microbiology major heard the Rwandan minister of health deliver a moving talk at the Global Health and Innovation Conference at Yale last year, she waited patiently in the long line after the keynote — not to ask for a photo as others had done — but to ask for a job.

“I want to know how can I help,” she remembers telling Dr. Agnes Binagwaho, a pediatrician who returned to her home country after the genocide and has helped recover a ravaged health system. Sarriera, who attended the conference as a member of UVM’s global health club, MedVida, also has plans to pursue medical school and become a pediatrician. But beyond just a career role model for Sarriera, Binagwaho is an inspiration.

The minister is the 2015 winner of the Roux Prize for her work to rebuild trust in the Rwandan health system and her contribution to initiatives that have increased the country’s life expectancy by 20 years, drastically dropped the maternal mortality rate, and, now that people are living longer, is expanding care for non-communicable diseases, as well. The Atlantic has called it a historic recovery — one the U.S. could learn from.

Sarriera promised the minister that if she accepted her help, she would find a way to get to Rwanda. FaceTiming from Kigali nearly 12 months after the Yale conference, Sarriera makes clear the gratitude she has for Binagwaho, who, amazingly, took a chance on the undergrad by offering her an internship, exposing her to work normally reserved for graduate students.

For three months now, Sarriera’s been immersed in learning the history of the Rwandan legal system. Why law when it’s medicine she wants to pursue? Her project expands on Binagwaho’s doctoral research, which uncovered troubling limits the colonial-influenced legal system puts on ensuring all citizens have the same access to healthcare. The path forward in the health sector means fully understanding policy that’s been shaped by a complex history.

Sarriera’s work began Christmas day with a flight to Europe, where the English minor began her internship with a document search, trying to trace the history of the book of laws that’s the basis for Rwanda’s legal system.

Now in Kigali, living in housing provided by Partners in Health, she’s conducting interviews with locals, reading hundreds of pages of legal documents and writing about her research. A native Puerto Rican, Sarriera’s also learning French, her third language. There are after-hours meetings with the minister and recently an invitation from Binagwaho to hear the president of Rwanda speak. She’s also checking in regularly with her UVM mentor, whom she credits for helping make this experience a reality.

Laura Hill, plant biology lecturer, guided Sarriera through the process of attaining UVM credit for this once-in-a-lifetime experience, six research credits and six internship credits. To supplement financial support Sarriera received from friends and family — her dad, especially — Hill also encouraged the student to pursue funding from UVM’s Office of Undergraduate Research, which helped cover the cost of her flight.

“Gabby was a student of mine in Genetics a few years back,” Hill says, recounting how they first met. Although the class was a challenge for Sarriera at first, it’s no surprise she wasn’t shy about speaking up and asking for help when she needed it. A mentor relationship was born, and the office hour visits continued even after the course was over. “Gabby’s success is really about her ability to approach a professor,” Hill says. “That’s how this all started.”

Just shy of halfway through her time in Rwanda, Sarriera reflects on where this experience might lead her next.

“I don’t think I can ever top this job,” she says. “I’ve gone to Parliament, I work for one of the leaders in global health, I just met the president. What else can I do?”

But make no mistake. When asked by Sarriera, the question, “What else can I do?” is bound to lead to surprising and powerful places. 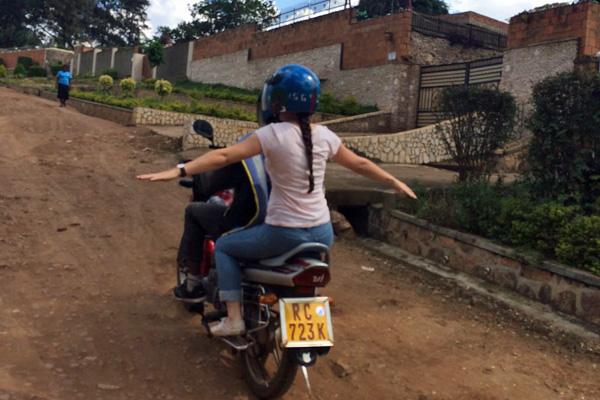