And he's amplifying marginalized voices in the Burlington School District 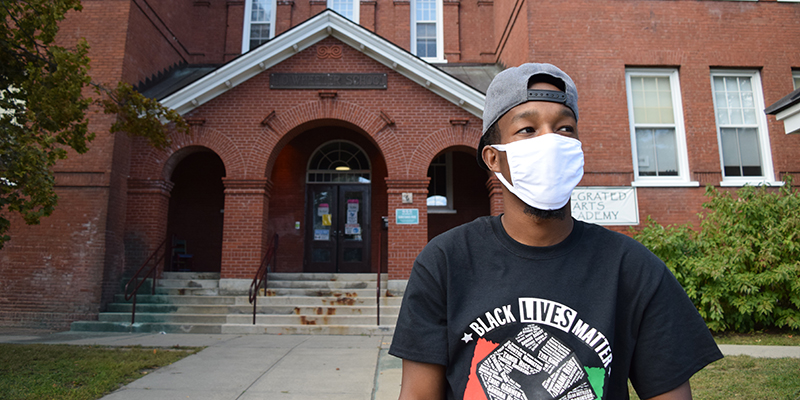 Outside of Integrated Arts Academy in Burlington’s Old North End, Aden Haji ’19 returns to his roots. It’s one of the most diverse schools in the state and it’s where he attended elementary school as a new American. “But it wasn’t called that when I went here,” he says. “It was H.O. Wheeler Elementary School.” (Photo: Kaitie Catania)

Starting a new job can be a stressful ordeal under normal circumstances, but starting a new job as an elected official during a pandemic is a whole different ball game. But it doesn’t seem to faze Aden Haji ’19. “Change is needed, no matter what time. It didn’t stop me in any way,” says the newly elected Ward 8 school board commissioner for Burlington School District.

At just 25 years old, Haji was sworn in to the position in April after campaigning on restorative practices and community- and student-centered decision making. It was a platform that not only resonated with voters — 58 percent of whom voted for Haji and unseated the incumbent of 23 nonconsecutive years — but it was also a personal platform for him.

At age six, Haji and his family arrived in Burlington in 2003 as the first Somali-Bantu refugees to resettle in Vermont. From there, nearly his entire academic journey was routed through Burlington and BSD. “It’s difficult having to navigate a new system and a new place. Going through the Burlington School District, I relied a lot on my peers who spoke the same language as me and understood the experiences I was going through. It was difficult to find those connections,” he says.

“At that time, I had no idea what the administration or school board was doing to address that or what discussions were being had to amplify those services,” he adds of his experience as a New American in the BSD system. “I didn’t know where to go to bring awareness to that issue.”

At the University of Vermont, however, he gravitated with ease to the Mosaic Center for Students of Color, where he was “able to lean on them whenever I needed support academically, socially, emotionally, what have you. The whole staff there has been so welcoming — Bev Colston — they’re all great people,” he says. But it was the anthropology department and faculty members like Luis Vivanco and Deborah Blom who encouraged Haji to pursue his political ambitions and plan for a future in elected positions.

Now as a school commissioner, communicating with constituents and making sure students and families have the information they need is at the forefront of Haji’s mind during his two-year term; especially as schools continue to respond to COVID-19. So far, the job has involved a lot of Zoom meetings for Haji and the other commissioners, as well as keeping track of the many moving parts required to keep schools open, safe and equitable for all students. It’s a fulltime job on top of his job at Spectrum Youth and Family Services, where he supports multicultural families. “There’s definitely road bumps along the way that have occurred,” he says.

Chief among them: the growing movement for racial justice and debates around School Resource Officers. BSD is one of more than 30 organizations in Burlington that declared racism a public health emergency this summer. And as calls for police reform and a more antiracist America ring across the country, Haji hopes to echo them in Burlington. “With my role as an elected official, it’s important to bring these conversations to light to the school board and speak on behalf of those who are marginalized,” he says.

But while there’s plenty of work to be done, Haji remains energetic, optimistic and steadfast in his commitment to improving the educational experience for all students. Having graduated not long ago from the BDS system and from the University of Vermont with a degree in anthropology, his close connections with young community members and current BSD students offer not only a unique insight into the issues, but a hopeful outlook.

“One thing I’ve seen us do better over the years is the encouragement of student leadership. Especially nowadays, I’ve seen students speak up on issues relating to the school district. I applaud those students and want them to continue to voice their concerns.” 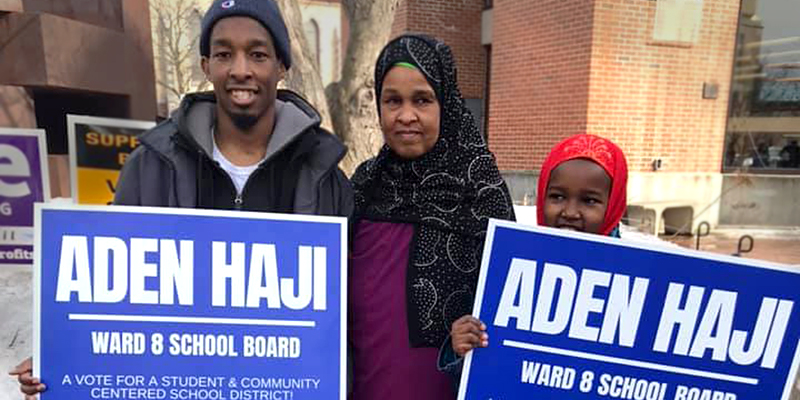 Haji was grateful for the support of his family during his campaign, particularly for his parents. "They’re my inspiration for everything I do," he says. (Photo: Courtesy of Aden Haji, taken early March 2020, prior to COVID-19 pandemic.)