Taking Students Birding During a Pandemic? It Helps to Have Friends at Audubon 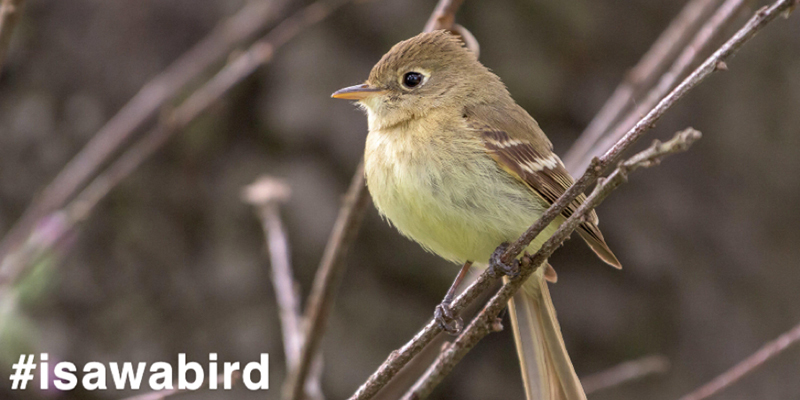 Students in an introductory environmental studies class participated in the Audubon Society’s #ISAWABIRD social media campaign by posting photos of birds they had seen during a virtual birding outing.

Remote instruction is challenging enough for college faculty when the format is a conventional lecture or seminar. But how do you take pandemic-dispersed students birding? For Rubenstein School associate professor and Gund Fellow Brendan Fisher, whose Introduction to Environmental Studies class has a week-long birding unit, the answer was simple — you don’t.

Trish O’Kane wasn’t so sure. At first O’Kane — a passionate birder and Rubenstein lecturer who organized the birding unit for Fisher — had assumed the popular outing would have to be scrubbed. But then she stumbled on a promising idea during a Zoom session with a group of students she was advising in a Race & Culture class.

“I was taking roll call and asked everyone in the class to share something,” she says. “One student took his phone into his backyard and showed us his new ducklings.” To her astonishment, O’Kane could hear and identify a nearby bird, an Eastern Phoebe.

“Oh my God,” she thought to herself. “I could hear birds through a kid’s phone and my computer.” Perhaps virtual birding was the answer for Fisher’s birding unit.

She tested the concept by sending a student and her parents into their Lewisburg, Penn., neighborhood with a cell phone connected by Facetime to O’Kane’s laptop at home. In 45 minutes O’Kane helped them identity a dozen birds. She began imbedding virtual birding sessions in her popular Birding to Change the World class, with experienced birding students using a virtual connection to help less knowledgeable students find and identify birds — with great success.

When she approached Fisher with her idea for salvaging his birding unit, he was intrigued. But the question remained: how could virtual mentors be found for all 222 students in the class, scattered in 27 states and 187 towns, ideally located in their area so they’d know the local birds?

O’Kane had an answer: the National Audubon Society. She called her contacts at Audubon — O’Kane is the faculty advisor for UVM’s student Audubon chapter — and pitched the virtual birding idea, which they loved. The society reached out to 5,000 of its most active members and, within five days, had a local mentor for every student in Fisher’s class.

“It was amazing,” O’Kane says.

"We knew our members would cherish the opportunity to share what they knew with young people,” says Heather Starck, Audubon’s vice president for grassroots capacity building, especially during the dark days of the pandemic, when an uplifting experience like mentoring was just what the spirit needed. "They really came through." Audubon’s motivation, in part, was to help the UVM students find their “spark bird” and become birders — and society members — for life.

Fisher had his own ulterior motive. “I'm convinced that birding is the gateway drug to environmental action, conservation science and sustainability,” he says, one reason he devotes a full week to the activity every year in his intro class.

Based on the experience of Mia Harris, a first-year environmental studies/political science major from Cranston, N.J., taking the class, Fisher’s take on birding, even in its virtual form, is on target. Harris went birding with her virtual mentor, Rachel Dipietro, along the New Jersey shore, with her father tagging along. As they got near the water, a huge bird flew into sight — which Dipietro identified as an osprey. It flew away, then came back and executed “the craziest dive I've ever seen by a bird,” Harris says. “Its talons went straight down and its wings went back. It went down and grabbed a fish and flew away.”

For Harris, the impact of the outing went beyond the spectacular display. She was already interested in a career in environmental policy or activism, but “going out into a really beautiful place, one of the quietest places I've ever been in New Jersey — I was just blown away. It reminded why I’m interested in environmental politics and policy in the first place. It really sparked a motivation in me.”

And true to Starck’s prediction, Harris —  who knew nothing about birds before the outing —  plans to go birding again.

“Once you go through an experience like this, it changes you,” Starck says. “You can't not see birds anymore.”

The partnership was such a good one for Audubon, it prompted the creation of a new program, Birding Buddies, that will match students with Audubon mentors for virtual birding sessions or, perhaps someday, in-person outings.