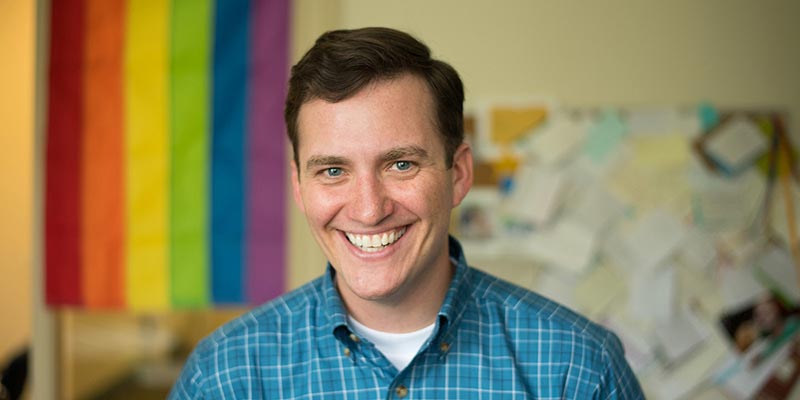 "There is no one narrative for LGBTQ student success, but federal and state-level decisions have a direct impact on how welcome or unwelcome LGBTQ people feel," says study author Jason Garvey, assistant professor of higher education and student affairs at UVM. (Photo: Andy Duback)

The author of a new study showing slow but consistent progress in the experiences of LGBTQ students on college campuses over the past 70 years is concerned that for the first time since 1944, that trend may be reversing.

The article, recently published in the Journal of College Student Development, shows generational progress and improved perceptions of campus climate for LGBTQ undergraduates from 1944 through 2013, based on data form the National LGBT Alumni Survey. Key factors included support by LGBTQ faculty, co-curricular involvement with peers, choice of major, and geographic location. Graduates of rural institutions reported more negative campus climates, while students who attended colleges in New England had the most positive experiences.

Perhaps the most interesting finding, however, was the role that historical events in U.S history and the LGBTQ movement played in the perceptions of campus climate. Wartime policies such as the Servicemen’s Readjustment Act of 1944, the Vietnam War draft, and the federal Don’t Ask Don’t Tell policy created isolating experiences for LGBTQ students with regard to identity disclosure and the criminalization of LGBTQ people in the armed forces.

“In the wartime Navy, anyone openly gay would have been given a dishonorable discharge and lost the support of his college education,” responded a gay man who graduated in 1945.

“Had I revealed my sexuality I most likely would have lost my scholarship and would have immediately been inducted into the U.S. Navy as a Seaman recruit,” reported a gay Hispanic man at an Ivy League school in 1970.

“I was closeted and in the ROTC, so discussing my orientation was not an option during the era of Don’t Ask, Don’t Tell …. The pressure from being closeted had a direct effect on my academic performance,” wrote a gay man who graduated in 1994.

Not coincidentally, the study showed that the first time the mean standardized score for campus climate perceptions showed a positive value was 1998 – the same year Matthew Shepard was murdered, sparking widespread attention to homophobia and violence against LGBTQ people. A proliferation in the number of on-campus resources for LGBTQ students followed suit in the early 2000s.

“The gradual acceptance and affirmation of LGBTQ people in mainstream society are inextricably linked to increasingly progressive social policies for LGBTQ people and more positive perceptions of campus climate in higher education,” says study author Jason Garvey, assistant professor of higher education and student affairs at the University of Vermont, who co-authored the article with graduate students Laura A. Sanders and Maureen A. Flint from the University of Alabama.

Garvey is concerned that recent policies by the Trump Administration, coupled with a rise in anti-LGBTQ state-level proposals, are negatively impacting the overall climate for LGBTQ people on – and off – college campuses. In particular, he cites a federal ban on transgender individuals in the military; the so-called “bathroom bill” to restrict the use of public restrooms by transgender people; and a filing by the Justice Department asserting lesbian, gay and bisexual people have no protections under Title VII of the Civil Rights of Act.

“This study shows that the warmth or chilliness of higher education for LGBTQ people differs greatly depending on the region and whether an institution is urban or rural, and I think a lot of these geographic differences are coming to the forefront because of the Trump administration,” says Garvey. “There is no one narrative for LGBTQ student success, but these federal and state-level decisions have a direct impact on how welcome or unwelcome LGBTQ people feel. It feels like we’re moving in the wrong direction, which is especially discouraging considering the gradual progress across the last seven decades.”

No data, no power

Less publicized, but no less important, says Garvey, is the Trump Administration's decision to not include data collection from the 2020 Census related to sexual orientation and gender identity, and the removal of a question allowing respondents to identify as transgender from the National Survey of Older Americans Act Participants. The Department of Housing and Urban Development also withdrew two notices expected to impact data collection and implementation guidelines for a homelessness prevention initiative targeting LGBTQ youth.

“There’s a data-void for LGBTQ people and we, therefore, have difficulty legitimizing our experiences through empirical data,” says Garvey. “Only recently have scholars and higher education administrators begun to understand the importance of data-driven experiences for LGBTQ people. It may not sound like a big deal that the Trump Administration is erasing LGBTQ and trans people from federal data collection, but by empirically tracking the experiences of LGBTQ, we're demonstrating the need for increased resource allocation, more LGBTQ affirming policies, and a greater depth of understanding of our stories.”