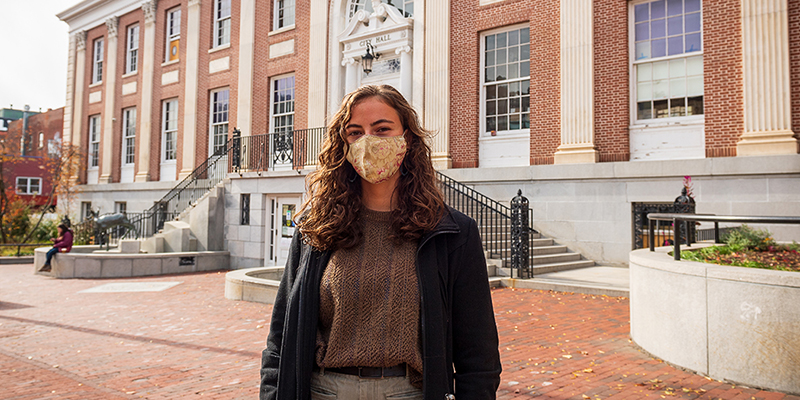 A continually updated online map hosted by UVM’s student-led Community News Service has made following the progress of early voting transparent and accessible to all. Senior Valentina Czochanski has developed and maintained the resource. A triple major in global studies, sociology, and Italian studies, Czochanki’s work on the voting map connects with her broader interest and work on social justice issues. (Photo: Sally McCay)

As the United States’ tumultuous 2020 election finally crosses the Nov. 3 finish line, balancing the protection of voting rights with the safety of voters and poll-workers during the pandemic has been critical. Increasing options for absentee ballots is one solution that many states have embraced. And Vermont took it one step further, joining a handful of states that mailed every registered voter a ballot with a pre-paid return envelope. Vermonters embraced the option, mailing back the absentee ballots at a nation-leading rate on a per capita basis. As of Oct. 29, more than 236,000 Vermonters had cast their votes by mail.

A continually updated online map hosted by UVM’s student-led Community News Service has made following the progress of early voting transparent and accessible to all. UVM senior Valentina Czochanski has developed and maintained the resource, which displays town-by-town vote totals through easily grasped gradations in color shade across the Vermont map.

When she initially learned about the voting data from Richard Watts, co-director of the university’s Reporting and Documentary Storytelling program, Czochanski was eager to get involved. Cory Dawson, Community News Service editor and a 2016 UVM grad, also saw the opportunity to deliver clear information. “We got the data back, and it was begging to be visualized,” Dawson told WCAX-News on Oct. 15, as he and Czochanski were interviewed for a report on the project.

In creating the map and writing an accompanying article, Czochanski interviewed Vermont Secretary of State Jim Condos and town clerks across the state. She notes that they universally emphasized a commitment to providing all Vermonters with the opportunity to vote using the method that is most convenient and safe for them. And, in regard to concerns about potential voter fraud, they expressed confidence in the security of mail-in ballots.“The true voter fraud in this country is denying an eligible American the right to cast a ballot,” Condos told her.

“It all comes back to elections and voting,” Czochanski says. “I hope that having this data available might encourage people to vote and increase Vermont's voter participation. It is a critical moment in our democracy.”

An Honors College scholar and triple major in global studies, sociology, and Italian studies, Czochanki’s work on the voting map connects with her broader interest and work on social justice issues. She was a teaching assistant for the Liberal Arts in Prison program led by Kathy Fox, professor of sociology, and has volunteered for three years at the Chittenden Regional Correctional Facility for women.

Updating the Vermont early voting map leading up to the election has been a daily task for Czochanski over recent weeks, work that has been driven by her commitment to accessible data and civic engagement. “Vermonters can see our democracy happening around them in real time, and I am happy to help make that possible,” she says.

The Community News Service is a UVM-coordinated effort, part of the Reporting and Documentary Storytelling program, offering students hands-on experiences in journalism while helping to provide local news in Vermont.