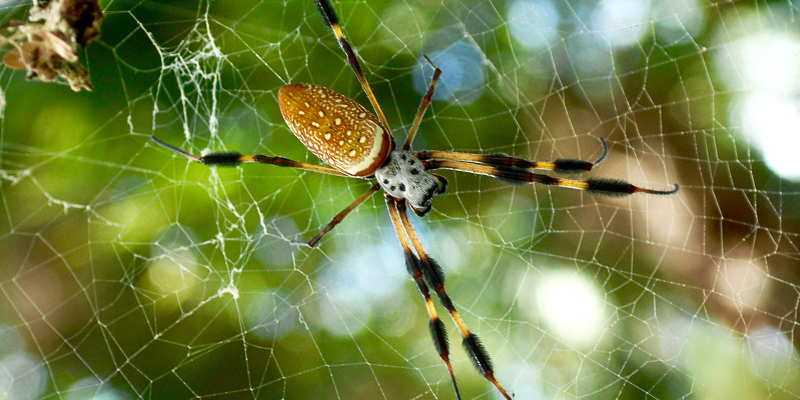 How does a golden orb-weaver spider make many kinds of silk—from super-strong to sticky? UVM biologists Ingi Agnarsson and Linden Higgins were part of a team that cracked open the complex puzzle, in the largest-ever investigation of spider silk genes. Their surprising results were published in the journal Nature Genetics. (Photo: Stacie L. Bumgarner)

Spider silks, the stuff of spider webs, are an engineer’s dream: they can be stronger than steel at a mere fraction of weight, and also can be tougher and more flexible. These silks also are nearly invisible to the human immune system. Some even inhibit bacteria and fungi, making them potentially ideal for surgery and medical device applications.

However, exploitation of these natural marvels has been slow, due in part to the challenges involved in identifying and characterizing spider silk genes.

As they report today in an advance online paper in Nature Genetics, the scientists sequenced the full genome of the golden orb-weaver spider (Nephila clavipes), a prolific silk-spinner that turns out to produce 28 varieties of silk proteins. In addition to cataloguing new spider silk genes, the researchers discovered novel patterns within the genes that may help to explain the unique properties of different types of silk.

“Spider silk is much more complex than we previously thought,” said UVM biologist Ingi Agnarsson, an expert on spider silk biomechanics. He and his colleagues discovered that “most silk fibers seem to be composed of a mosaic of multiple proteins rather than a single or a few genes underlying each specific silk,” he says. This gives spiders many options. “By rearrangements of 'motifs' through evolutionary time, and differential expression patterns in real time,” Agnarsson says, “a vast arsenal of different silks are at a given spider's toe-tips.”

“There were so many surprises that emerged from our study: new silk genes, new DNA sequences that presumably confer strength, toughness, stretchiness and other properties to silk proteins; and even a silk protein made in venom glands rather than silk glands,” said senior author Benjamin F. Voight at the University of Pennsylvania. “All this new information should greatly advance our efforts to capture the extraordinary properties of these silks in man-made materials.”

Even though spider silks have been studied for more than 50 years, earlier foundational work had identified only a comparative handful of spider silk genes. To find all of the silk genes hidden across the golden orb-weaver’s genome—the veritable “lab rat” of spider silk science—required the construction of the entire genome, a herculean task comparable to solving a multimillion-piece jigsaw puzzle, with few clues as to how these pieces fit together.

In the golden orb-weaver’s genome—which turns out to be about as large as the human genome—the researchers identified more than 14,000 likely genes, including 28 that appear to encode spider silk proteins, known as spidroin. These, in turn, give rise to silk's many diverse functions, from aciniform silk for wrapping prey (and tying down partners for mating), to the super-strong major ampullate silk from which spiders (and Spider-Man) swing while at work. However, some of the newly discovered spidroins have sequences that do not fit neatly into any of these categories—suggesting that the encoded silk proteins may have novel functions.

A major goal of the new research is to understand the molecular underpinnings of the stunning breadth of biomechanical properties among different spider silks. “We find strong evidence that much of the variation in the protein structure of silks lies in the organization of repetitive 'motifs' generally shared among all silks, into multi-motif 'cassettes' generally unique to each specific silk,” says UVM’s Agnarsson. “This is like a Lego set, simple building blocks that can be arranged in endless different ways to achieve different results"—such as high tensile strength, flexibility, or stickiness.

The biggest surprise was the discovery that one of the orb-weaver’s spidroins—FLAG-b, a novel discovery by the group—appears to be produced primarily in the orb-weaver’s venom gland rather than in any silk gland, hinting at intriguing new functions for silk connected to prey capture, immobilization, or preservation.

In their analyses of the genome data, the team also identified 649 likely genes that are not spidroin genes but are highly expressed in silk glands, and thus probably have roles in converting the liquid silk from spider cells into solid, spinnable threads—a tricky process that biotech engineers are just beginning to achieve outside of spiders.

The team is now following up with a genome-sequencing study of Darwin’s bark spider, which makes silks so tough it allows them to span rivers. This next project stems from field work by Agnarsson and his colleague Matjaž Kuntner—who discovered the Darwin's bark spider in Madagascar in 2009.

This release adapted from work by Karen Kreeger, University of Pennsylvania

Joshua E. Brown
A vast arsenal of different silks are at a given spider's toe-tips. —UVM biologist Ingi Agnarsson