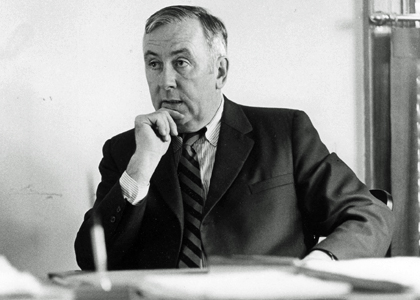 Not long after Professor Raul Hilberg was named chair of the Department of Political Science in 1972, he began hiring promising scholars in an effort to make the department one of the best in the nation. Among them was a retired U.S. Army Brigadier General who was finishing his dissertation at Princeton after having completed two tours in Vietnam.

Douglas Kinnard, who passed away on July 29 at the age of 91 in Pennsylvania, would bring national attention to UVM with the release of The War Managers in 1977, prompting an appearance on “Good Morning America” with General William Westmoreland. The landmark work, revealing that nearly 70 percent of the Army generals who managed the war were uncertain of its objective, was followed by other highly regarded books, including one that recast the presidency of Dwight Eisenhower in a more positive light, and “The Secretary of Defense,” an analysis of the evolution of the American national defense process.

“Raul was determined to reach for the skies and demonstrate to everyone that he could hire the cream of the crop, and for the most part he did by bringing in Kinnard and scholars David Rosenbloom, Peter Graboski and Dan Hoffman,” says Garrison Nelson, professor of political science who was already at UVM when Kinnard was hired in 1973. “Kinnard was a key hire coming from Princeton as part of a new wave of intellectual generals entering academia. He defined gravitas and was a tall, imposing man, but chose not to impose his will on others, and that was his most endearing quality.”

One of Kinnard’s longtime friends and part of the new breed of intellectual generals was John Eisenhower, son of President Dwight Eisenhower, who graduated with Kinnard from West Point in 1944. Eisenhower, now 91, said he and Kinnard, whom he last saw in 1989, became very close at the United States Army Command and General Staff College (CGSC) at Fort Leavenworth, where they were preparing to become higher ranking officers. Eisenhower, a retired United States Army Brigadier General, author of several books on military history, and former U.S. Ambassador to Belgium, said Kinnard’s military background and political knowledge gave him a unique vantage point as a scholar and allowed him to look beyond the surface of key issues.

“We had a lot in common,” said Eisenhower from his home in Trappe Md., where he’s working on two new books. “We both left the military early and had an interest in military history and wrote a lot about it after we left. He was a smart guy. When you talked to Doug you knew you were speaking with an intelligent person. He was a tough guy...or maybe shrewd is a better word. He knew what he wanted, and he went after it. But he also had a good sense of humor, a sort of wry sense of humor, and was a good friend.”

In a 2007 interview with Vermont Quarterly magazine, Kinnard spoke of his bond with Hilberg, who would become a mentor and close friend. “His bond with the eminent Holocaust scholar was strengthened by Kinnard’s personal experience as a soldier in General Patton’s 71st Infantry Division during World War II,” wrote VQ editor Tom Weaver. "The unit pushed farther east in Europe than any other American force, and Kinnard was there for the liberation of Gunskirchen Lager, an Austrian concentration camp where 18,000 Hungarian Jews were imprisoned. 'I was not an expert on the Holocaust,' said Kinnard, 'but a witness.'"

Kinnard, who will be interred in West Point Cemetery, chronicled his unlikely journey from an orphanage in Patterson, N.J., to graduating from West Point on D-Day to combat missions in World War II and Korea and as a brigadier general in Vietnam, to becoming a highly regarded scholar in two memoirs. In the second, Adventures in Two Worlds: Vietnam General and Vermont Professor, Kinnard spoke fondly of his time at UVM.

“It was the best of times,” wrote Kinnard referring to his return to UVM in 1981 after a year on sabbatical. “That fall we were back in our home near UVM, where I was now a tenured professor. I was fortunate to have a good following of students, many of whom had started with my basic course in International Politics… during the academic years spanning the period September 1978 to the summer of 1980 -- thanks probably to the earlier publicity connected with the War Managers -- I became a recognized academic. In that period the university also awarded me tenure and a full professorship. There came many invitations to speak, usually on something related to my Vietnam research. President Lattie Coor frequently invited me to talk to various groups connected with the university, such as being the dinner speaker at the annual trustees’ meeting.”

John Burke, political science professor and interim associate dean in the College of Arts and Sciences, arrived at UVM as Kinnard was leaving, but stayed in touch over the years to talk about shared research interests in presidential politics. Burke recalls hearing Professor Jim Pacy talk about how Kinnard's passion and dedication for his work manifested itself at home. At his house on South Prospect Street, he had named rooms for his books and projects. Perhaps named "War Managers" or "Defense Politics," the rooms were filled with stacks of well organized papers, charts, typewriters and other research materials.

“He was an extremely active researcher. The book he wrote based on his dissertation took another look at Eisenhower and recast him as a smarter president who was more on top of things,” says Burke, a fellow Princeton graduate who describes Kinnard as having "command presence." "Historically, we’ve had a teacher-scholar model at UVM, so if you were a student here in the 70s, you would have taken small classes from people like Hilberg and Kinnard, and that’s extraordinary."

Kinnard would take a leave of absence from UVM in 1984 to become the U.S. Army’s chief of military history in Washington and would make the difficult decision not to return to UVM. “In making this decision I have considered a whole range of personal and professional matters," wrote Kinnard in his memoir. "I look on the ten years in the Department of Political Science as my best years. If it were solely up to me, I would of course be returning, but that is not possible. I will certainly miss my students and colleagues and the great ambiance of that area.”

Mark Stoler, professor emeritus of history and expert on U.S. diplomatic and military history, also stayed in touch with Kinnard after he left, and said he was still actively writing when he met with him at his home last October. “He was an imposing man as generals can be, but he carried himself in a way that was combination professor and general,” said Stoler. “When he retired from UVM it was far from the end of his career.”

Services will be held in the Old Cadet Chapel of the United States Military Academy at West Point, New York, on Thursday, August 15, 2013, at 10:00 a.m. Kinnard is survived by his wife, Wade Tyree Kinnard, and son, Fred ("Kip") Kinnard.