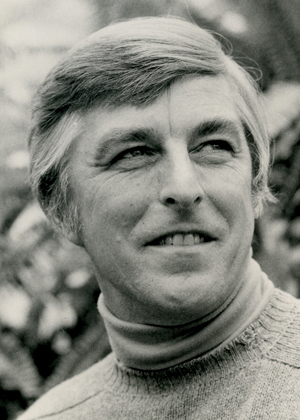 Hub Vogelmann in 1979. From towering white pines to bizarre carnivorous bladderworts, he wondered at nature's wonders -- and worked tirelessly to protect them.

Hubert “Hub” Vogelmann, a botanist and conservation leader whose pioneering research on Camel’s Hump focused the nation’s attention on the threat of acid rain, died on October 11th. He was 84.

“Vermont is the green place it is because of Hub,” said Jeffrey Hughes, who now directs the UVM Field Naturalist Program that Vogelmann founded. “He was the one who really established Vermont’s environmental ethos.”

Working with students in the early 1960s, Vogelmann documented the status of trees, particularly red spruce, on the slopes of Vermont’s iconic mountain, and began to take an overall measure of the health of Vermont’s high-elevation forests.

When he returned in the late-1970’s, he was able to show a shocking decline in the well-being of trees — including a loss of half of the spruce — and trace this problem back to pollution from cars and Midwestern coal-fired power-plants.

His 1982 article in Natural History, “Catastrophe on Camel’s Hump,” led to strong reactions by leaders in Washington and scientists across the nation. “It was a bombshell,” Vogelmann recalled in a 1991 Burlington Free Press article.

Soon, a string of politicians and journalists were trooping up the side of the mountain with Vogelmann to see his work first-hand. By 1988, President George H.W. Bush had made addressing acid rain a national policy priority. Vogelmann’s dramatic research, which followed other scientific reports from the Adirondacks and New Hampshire, set the stage for revisions to the Clean Air Act that improved the problems of acid rain.

Thomas Siccama was one of Vogelmann’s doctoral students in the 1960s and worked with him to gather the original Camel’s Hump tree data. “Rachel Carson did her thing in 1962 and the world became aware of the environment as a whole,” Siccama recalls. “Before that you had to study a particular fungus or plant or tree. It wasn’t really considered pure science to study whole systems.” But Vogelmann was one of Carson’s heirs, Siccama said.

“Hub understood that the whole is greater than the sum of the parts,” said Siccama, professor emeritus of forest ecology at Yale, who completed his undergraduate and PhD degrees at UVM. “We capitalized on that new approach in our Green Mountain study.”

For Jeffrey Hughes, Vogelmann stands in a rarified lineage with Vermont’s nineteenth-century philosopher of nature, George Perkins Marsh, considered by many to be the nation’s first environmentalist. “Marsh’s philosophical treatise, Man and Nature, was a big deal,” Hughes said, “but Hub’s contribution was as big — and it was through action.”

Up from the pond

Vogelmann graduated from Heidelberg College in 1950, then received his doctorate in botany from the University of Michigan in 1955. That same year, he moved to Vermont with his wife Marie, to begin a 36-year tenure as a professor at the University of Vermont, including 16 years as chair of the Botany Department (now Plant Biology).

Not long after Vogelmann arrived, he discovered Shelburne Pond, an undeveloped stretch of water surrounded by limestone cliffs and marshes, where he spent many hours fishing. “It was wholly undeveloped,” he told me on trip there in 2007, “and also wholly unprotected.” So he went into action to try to protect it.

Soon, the then-chairman of his department, James Marvin, asked Vogelmann to help start the first branch of The Nature Conservancy in Vermont; he volunteered and became one of the chapter’s co-founders, including time as chairman. By traveling to many Rotary Club meetings, and other gatherings across the state, Vogelmann slowly sparked interest in a post-Carson land protection movement for Vermont — and his specific effort to conserve the pond.

This was a favorite spot among his decades of explorations looking for rare plants and beautiful habitats across Vermont (as well as in the Amazon Basin, Mexican rain forests, and Arctic tundra) — that he combined with a gentle but unrelenting effort to conserve them.

In 1973, Vogelmann led the acquisition of the first piece of land at Shelburne Pond; today it’s a conservation area of more than 1,000 acres. And in the years before and after, he helped The Nature Conservancy, the State of Vermont, and many other groups to protect hundreds of thousands of acres of important natural areas across the state.

“He’s a constant reminder of what ecological science is for — it’s not just for the dirt and plants and bugs and animals — it’s for people and you have to factor them in,” Jeffrey Hughes said. “Hub’s message was always: you can know everything on earth but if you can’t get other people to hear what you’re saying, it doesn’t matter.”

Before protections arrived for Shelburne Pond or Molly Bog or other treasured spots, Vogelmann had been instrumental in protecting what he called “Vermont’s rooftops”: the Green Mountains. In 1958, the Army Corps of Engineers proposed a missile communication facility on the summit of Mount Mansfield. There were separate plans to blast a tunnel through Smuggler’s Notch. The failed 1930’s vision of a high-elevation highway through the Greens was being reconsidered. There was discussion of paving the Long Trail.

Vogelmann was a key figure in building up awareness of the ecological value and fragility of these alpine places. Whether speaking to garden clubs, fellow scientists, or “making coloring books for kids — to color the mountains green for Vermont’s Green Mountains,” Hughes said, “he led the crusade; he was a fellow with a passion.”

His crusading included a leading role in the creation, in 1970, of Act 250, Vermont’s nationally important land-use law. He worked with numerous people across the political spectrum to stop aerial spraying of herbicides over Vermont’s forests. And he served on many environmental boards including the Governor's Advisory Board under Governor Howard Dean.

“Hub’s real power was building teams and his real wisdom was in the choosing of people and building good teams,” said David Barrington, now the chair of UVM’s Plant Biology Department. “I think that’s why the acid rain research worked well, and why he got so much else done” — outside of academic life.

The next Muir or Darwin?

Or as Charles Johnson, Vermont’s state naturalist, wrote in the preface to Vogelmann’s 2011 memoir, On Schillhammer Road: The Life of a Botanist, “I even heard someone describe him as, ‘a rarity — a botanist with charisma.’”

He poured a lot of this charisma into the formation of UVM’s famed Field Naturalist Program. “He was so humble,” recalls one of the program’s graduates, Ana Ruesink, who went on to lead the science program for the Vermont chapter of the Nature Conservancy in the early 2000s. “He would take us, with delight, out for hikes on Camel’s Hump, and I bet he had a lot of other things to do.”

Vogelmann formed the FN program in 1983 and secured funding from the Mellon Foundation in response to the increasing specialization of science he observed. Himself a skilled plant taxonomist, Vogelmann understood the value of expert knowledge. But he worried about the loss of big-picture and politically savvy scientists.

“Where are the next John Muirs, the next Charles Darwins, going to come from?” was his concern, said Jeffrey Hughes. So “he created a graduate program to train the world’s future Darwins, Muirs, Browers and Vogelmanns,” wrote the program’s writing instructor, Bryan Pfeiffer, in a recent blog post eulogizing Vogelmann. “He leaves an inheritance of conservation and a devotion to the discovery of nature and what it means to be alive outdoors.”

A memorial service for Hub Vogelmann will be held on Saturday, Oct. 19, at 1 p.m. in the Ira Allen Chapel on the University of Vermont.