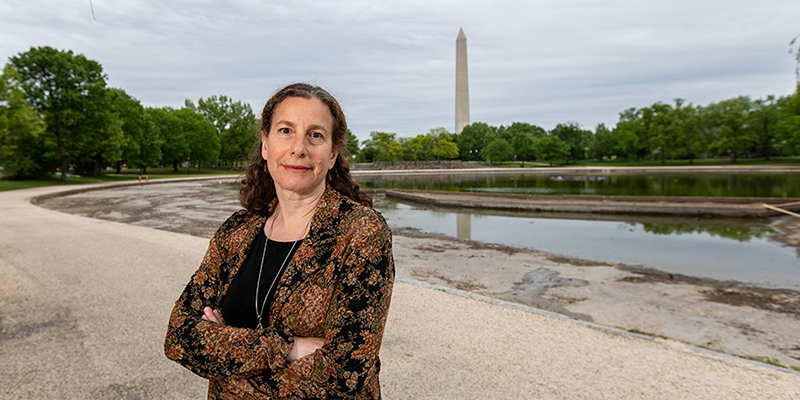 Alma Ripps '88, Chief of Policy for the National Park Service. Ripps would like to protect and extend Roosevelt’s legacy, making the natural wonders within the national parks available and well-managed for all Americans. “They’re our parks,” says Ripps. “They belong to all of us.” (Photo: Alex Edelman '13)

As Alma Ripps rides the Metro to work in downtown Washington, D.C., she might be thinking about drones, electric bicycles, battery-powered scooters, or vaping. No, not as a distraction from her job as the Chief of Policy for the National Park Service, but because of it.

Of course, she knows the story of how, in 1903, the famed conservationist John Muir and President Teddy Roosevelt went camping in Yosemite National Park. After three days of quiet solitude, the president said, “It was like lying in a great solemn cathedral”—and he went on to be perhaps the nation’s greatest champion for what became the National Park Service.

Ripps would like to protect and extend Roosevelt’s legacy, making what he called “the most glorious heritage a people ever received,”—the natural wonders within the national parks—available and well-managed for all the American people. “They’re our parks,” says Ripps, who graduated from UVM in 1988, “They belong to all of us.”

Which is why she spends time thinking about drones, e-bikes, scooters, and vaping.

A few year ago, Ripps got a report about a climber on El Capitan in Yosemite getting buzzed by a drone. “Very dangerous,” she says, “if you spent hours and hours scaling a wall, the last thing in the world you want is a buzzing drone near your head, right?” She heard about parks, such as Zion National Park, where people were flying them close to herds of Bighorn sheep, “spooking wildlife. We were having mothers leave behind their young,” she says. She was hearing from park managers:  what do we do about these things? So, Ripps and her team developed a policy memo that was issued by the director of the National Park Service: “recreational drones are not allowed in our national parks,” she says, “though we do use them internally for firefighting, for checking on invasive species, and other research.”

Ripps’ work stands at a crossroad where ancient natural features, untrammeled wilderness areas, and hallowed historic grounds meet a rapidly changing American culture. “A lot of what we’re dealing with now are new technologies,” she says.  “Obviously we never had a drone policy up to a couple of years ago because they didn't exist.”

Electric bikes present another new management challenge in the 419 different sites—more than 84 million acres—that make up the U.S. National Park System. “More and more people are using e-bikes for recreation. People with disabilities are using them to access remote areas. People are using them as an alternative to cars,” Ripps says. “There are a lot of benefits associated with them, but we don’t have a consistent policy on their use across the system.” So what’s a policy chief to do? Find the middle way. “In some areas of a park it's a very appropriate use; but in some it's not,” she says. “Right now I have on my desk a piece of policy we've been working on for e-bikes that we hope will be finalized soon.” Even an urgent policy memo can take a year or more to finalize—there are many stakeholders to hear from and details galore (e.g., there are numerous classes of e-bikes).

Ripps grew up in a New York City family that did a lot of hiking and camping. “I always wanted to be a wildlife biologist,” she recalls, and at UVM she majored in environmental studies with a wildlife biology minor. Summer courses in botany and a stint tracking endangered ocelots in south Texas confirmed her love of natural places—and made her rethink her plans to be a field scientist. “You can’t go to UVM and go hiking in the fall and not fall in love with Vermont. I absolutely loved my four years there. But being in Texas, tramping through the thorny brush and heat, and being bitten by everything, well, I realized:  this isn’t who I am,” she recalls. “Still, I wanted to protect natural and cultural resources and developing the policies to do that seemed like a better fit for me,” she says.

Ripps has done just that for the federal government since 1992, starting as a Presidential Management Fellow at the National Oceanic and Atmospheric Administration. She joined the National Park Service in 2000 working in the Office of Legislative and Congressional Affairs. She was appointed deputy chief of staff in 2010, and policy chief in 2013. “I'm on my fifth administration in DC and the wonderful thing is that national parks are a nonpartisan resource,” she says. “Some of the biggest park supporters are conservative Republicans, so it doesn't track to any one political party. People just love our national parks.”

Of course, politics affects her job. “Every administration will have different priorities; the current one is promoting expanded access and opportunities for outdoor recreation on public lands. They’re very pro-hunting and fishing,” she says. “There are some uses that may be appropriate in wildlife refuges or natural areas, but not in our parks.” And the popularity of national parks with the public hasn’t translated into federal appropriations sufficient to maintain them. “Our roads have huge holes and we have a deferred maintenance backlog of over $11 billion,” Ripps says. This reality affects the roughly twenty pieces of policy she has in motion at any one time—from seawall construction to protect buildings and historic sites against sea-level rise to new initiatives bringing national park rangers into inner-city schools.

A recent policy on vaping puts electronic nicotine delivery systems in the same category as cigarettes—banned in many park areas—but what about electric scooters in urban parks? “We have no policy yet,” Ripps says. “that’s one we will need to figure out at some point.” In the meantime, she’s recently returned from her own family camping trip to Yosemite with her husband, two sons, “and my siblings and their kids, 18 of us in all. All in tents,” she says—a happy outing to one of the nation’s natural sanctuaries without one drone in sight.