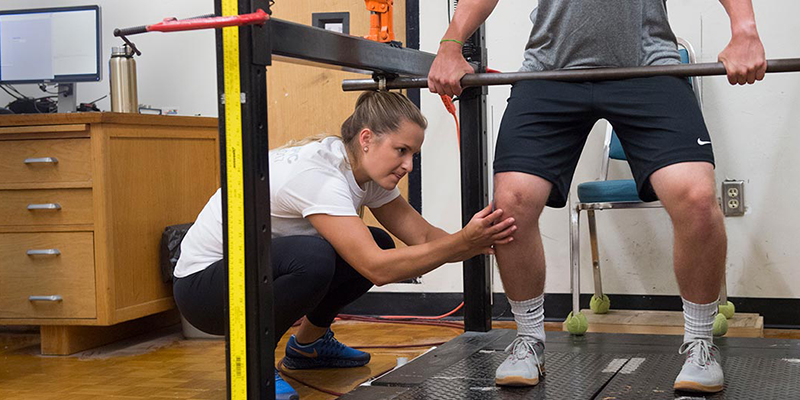 Senior Kristina Ushakova knows the value of a bold, well-targeted request. The exercise science major considers it a necessary practice for gaining access to world-class trainers and researchers in her chosen profession of strength and conditioning coaching.

That initiative paid major dividends this summer when she received the opportunity to spend three months as an intern at the U.S. Olympic Training Site at East Tennessee State University. Part of that experience included a trip to the Pan American Weightlifting Championships in Miami with Doctoral Fellow and OTS Weightlifting Coach Aaron Cunanan. Ushakova asked if she could join Cunanan to shoot video as part of the data collection process for his dissertation on the biomechanics of weightlifting.

“I just know what I want and I’m not afraid to ask,” says Ushakova, an accomplished CrossFit athlete and weightlifter. “The worst thing they can say is no. I basically invited myself to the Pan American Weightlifting Championships, which allowed me to meet some of the top weightlifting coaches and athletes in the world. You won’t know unless you ask.”

At the U.S. Olympic Site in Johnson City, Tennessee, Ushakova worked with Olympic-caliber weightlifters and bobsledders, collected and analyzed data using cutting edge technology, and attended clinics and lectures on a variety of topics related to athletic performance. She interned under renowned high performance coach Brad DeWeese, who she emailed after learning about him from David Brock, associate professor in exercise and movement science at UVM.

“Kristina was the first in the door and the last to leave,” says two-time Olympian Meg Stone, a leading strength and conditioning coach and co-founding director of the Center of Excellence for Sports Science and Coach Education at ETSU. “She has been quite an added value in that she learned our data collection methods and the technology that we use, which I think will really stand in good staid for what she wants to do in the future.”

A typical day involved setting up and breaking down twice-a-day workouts for weightlifters and bobsled athletes and helping them with training. Ushakova eventually assisted in the monitoring, testing and collection of performance data. She calibrated force plates for athletes to jump on or perform a squat, for example, so researchers could measure their rate of force development. She also analyzed urine samples and other performance data in a lab setting that was used by coaches to guide training decisions and track progress.

“Using sophisticated technology was really cool, but learning how to analyze and interpret data was especially important because the equipment is useless if a coach can’t properly interpret results,” says Ushakova. “The program is very focused on evidence-based training to help people reach their highest potential.”

At the Pan American Weightlifting Championships, Ushakova was able to interact and ask questions of Kyle Pierce, who coached Kendrick Farris to three Olympic Games, and U.S. Olympian and Weightlifting Coach Cara Heads-Slaughter. On her return to Vermont, Ushakova visited Heads-Slaughter at her training facility in Virginia. “It was an incredible experience to play a small part in the dissertation process and talk with coaches and athletes who are at the top of the sport. My internship supervisor, Doctoral Fellow John Wagle, constantly emphasized the importance of networking and that really resonated with me."

Bringing knowledge back to UVM athletics

Ushakova plans to apply what she learned over the summer here at UVM where she works with varsity athletes in multiple sports under the guidance of Mark Hickok, UVM’s co-director of athletic performance. She developed a resistance training program for a track & field athlete based on the principles of block periodization that she learned about at the Olympic training site. The program aims to sequentially increase the strength and power of the athlete, explains Ushakova, which would ideally translate to faster speeds on the track when paired with a logical speed development curriculum.

“I’m building it around the UVM track and field schedule so that I can better understand the realities and challenges strength coaches face like competition schedules, collaborating with a sport coach, and attempting to have the athlete peak at the right times,” says Ushakova. “My summer mentors really enhanced my understanding of training theory and proper planning. One of the biggest takeaways was the emphasis on the little things like proper running technique that can mean the difference between .01 of a second, which at this level could be the difference between winning an Olympic medal or not."

Department of Rehabilitation and Movement Science