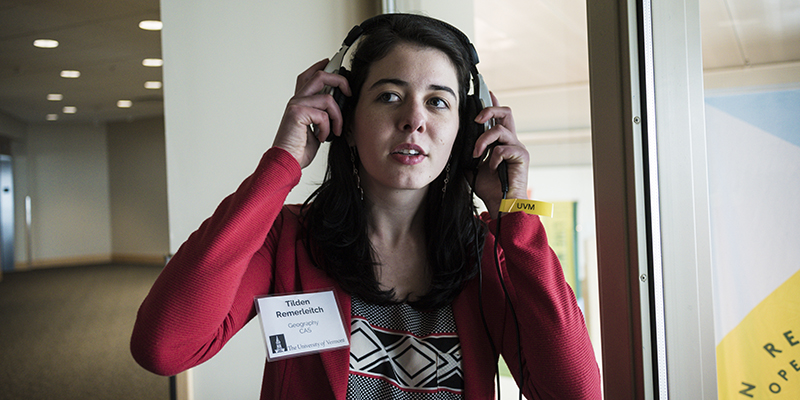 For her senior thesis, Tilden Remerleitch produced “Grounded,” a podcast that shares the story of refugee resettlement in Vermont. “I found that the UVM students who were my age who are refugees, their stories were the most impactful to me.” After graduation, Remerleitch will work with an NGO in Ecuador. (Photos: Ian Thomas Jansen-Lonnquist)

Near the entrance to the 2018 Student Research Conference, senior Tilden Remerleitch holds out a pair of headphones. Her thesis project, presented in a very of-the-moment format, is a podcast featuring stories of refugee resettlement in Vermont. “I hope people can listen and connect,” says Remerleitch, a geography major.

In the surrounding Creative Lounge and in the ballrooms beyond stood hundreds of students, ranging from first-years to PhD candidates. Near Remerleitch’s display, The Pink Triangle Project, a collaboration between UVM Hillel and UVM’s LGBTQA Center in its third year, looked toward the past, tracing the narratives of LGBTQ individuals around the Holocaust. Later in the day, a special session hosted with Lake Champlain Sea Grant looked toward the future, exploring how green infrastructure can help maintain resilient communities in the face of climate change.

From the 400 students who participated in the 12th annual conference, here are just a few stories of UVM research.

Skylar Bagdon '21 clips a nylon belt around his waist. Then he attaches tiny carabiners to the back of his boots. The carabiners are connected to thin cords that run up into a sleek plastic box on the back of the belt. He begins to walk and the cords move up and down. This is his invention, the Scavenger One, and his legs in motion activate generators in the box that produce five watts—enough electricity to charge a cell phone or power some medical devices. The engineering major points out that batteries are heavy and run out, solar panels need direct access to the sun—but “you can go anywhere on the planet with this and make power.” Next month, he’ll be taking it to a village in Tanzania and hiking up Mount Kilimanjaro to give it a rigorous test. 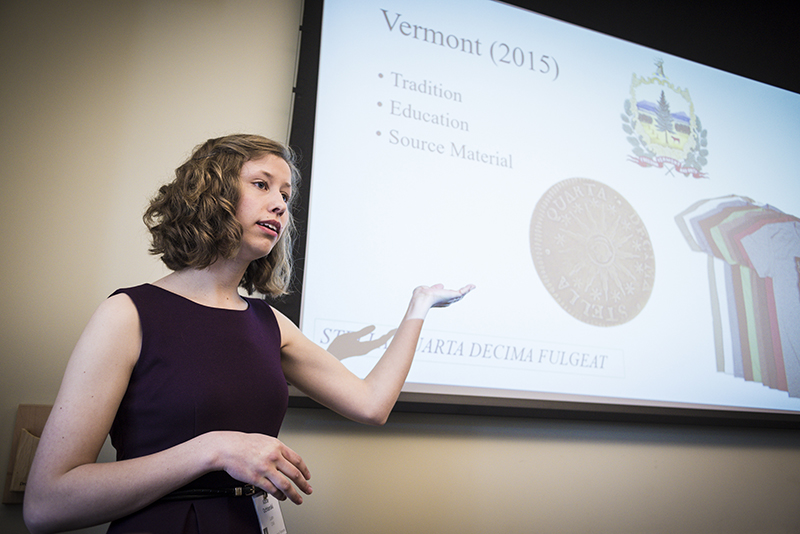 Latin may be a dead language, but its role as a signifier of culture, education, prestige and tradition lives on. That’s a central point made by Latin major Alice Ochterski in her oral presentation, “‘What’s a Motto with You?’ Latin Mottoes of the United States.” But beyond conjuring notions of sophistication — especially important to western states in the latter half of the 19th Century, when many of these mottoes were adopted — there’s another reason the language is a popular motto choice. “Latin is concise,” Ochterski says. “You can say more with fewer words.” Even as the number of Latin programs has decreased in K-12 education, or maybe even because of that, Ochterski hypothesizes, “Latin education has seen an increase in people who are passionate about it.” And since 2000, three more states have adopted Latin mottoes, including Vermont. Three years ago, during Latin Day celebrations right here at UVM, “Stella quarta decima fulgeat” (“May the fourteenth star shine bright”) became the official Latin motto for Vermont. 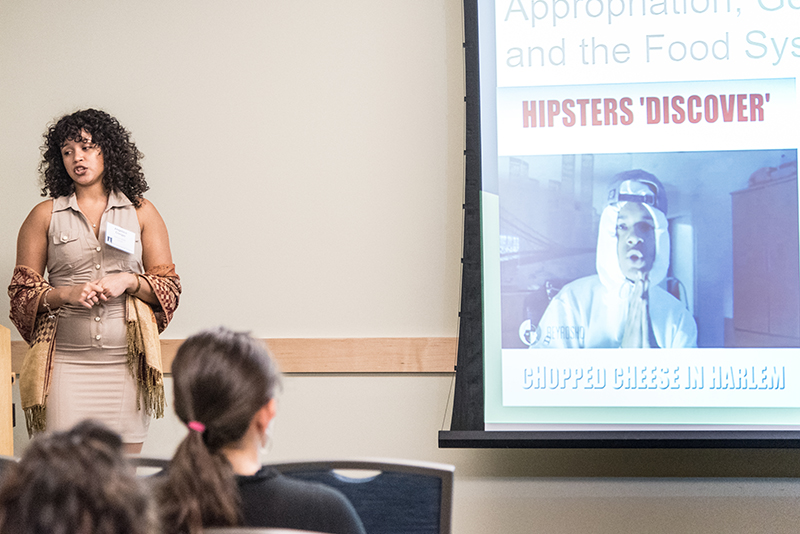 One way to describe a food desert is to show on a map where there are no supermarkets. But Angelica Crespo’s research in New York City digs below the surface of this anodyne notion to explore how corporate supermarkets—she identified Whole Foods—can push people of color out of the food system. “People in communities of color have found other means of eating besides supermarkets,” she says. Namely: small local food stores that serve “culturally relevant foods.” Crespo, a senior in Community Development and Applied Economics, surveyed storeowners and consumers in uptown NYC and contends that “if we want to introduce healthy foods into a community and to people of color who have endured colonization and slavery,” she says, “this is going to take more than just implementing supermarkets.” At the top of her recommendations: “Start local food stores to empower young women of color.”

A park a day keeps the doctor away? Aaron Schwartz, a PhD student in the Rubenstein School’s Natural Resources program, analyzed the sentiment of geo-located tweets sent from San Francisco parks, then compared them to messages sent before and after park visits. “Nature has a restorative effect,” explains Schwartz. Not only were tweets happier post-park, they were also more outward-looking. “Visitors were in a more collective frame of mind. ‘Me’ dropped out,” he says. The larger and greener the park, the bigger the mental health boost. Schwartz hopes his study will help link conservation goals with public health goals. “There are win-wins in protecting these spaces.” 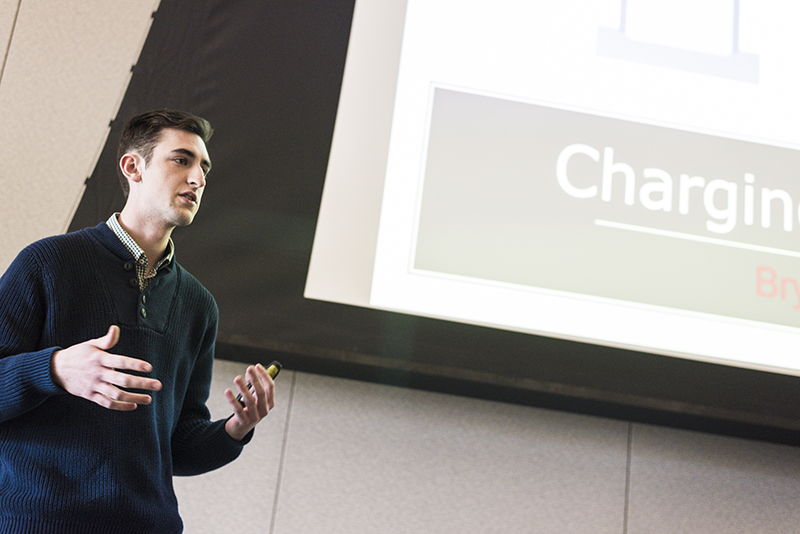 Bryce Dzialo ’18 steps to the front of the Sugar Maple Ballroom and asks, “How many of you drove electric cars to UVM today?” Not a hand is raised. “No? That’s why I’m here, to talk about that.” Dzialo is off and running in a five-minute “lightning” talk on his historical analysis of the American auto industry and Tesla electric cars. Old technology dies hard is key to Dzialo’s message. The notion that a car must have an internal combustion engine is deeply ingrained. But as Silicon Valley’s Tesla does its own ingraining into our digital culture, this will change, Dzialo says, sure as we type on MacBooks rather than Smith Coronas.

For her honors thesis in Film and Television Studies, “what I essentially did was watch a ton of ‘Keeping Up With the Kardashians,’” laughs Catherine Leary. Why the Kardashians? As the senior explains, “Our President is a reality TV star. Clearly, there’s a significance to reality TV in this moment.” Leary used Lacanian psychoanalysis, based on the ideas and theories of Jacques Lacan, plus postfeminist and queer theories to explore reality, sexuality, and gender in the show. “The ‘real’ can be found, even on ‘Keeping Up With the Kardashians.’ Breakthroughs can still happen. Categories of identity, or perceptions and representations that don’t fit with the norms, there could be something subversive about the Kardashians, despite what we all think.” After graduation, Leary will go on to UVM’s accelerated master’s program in English. 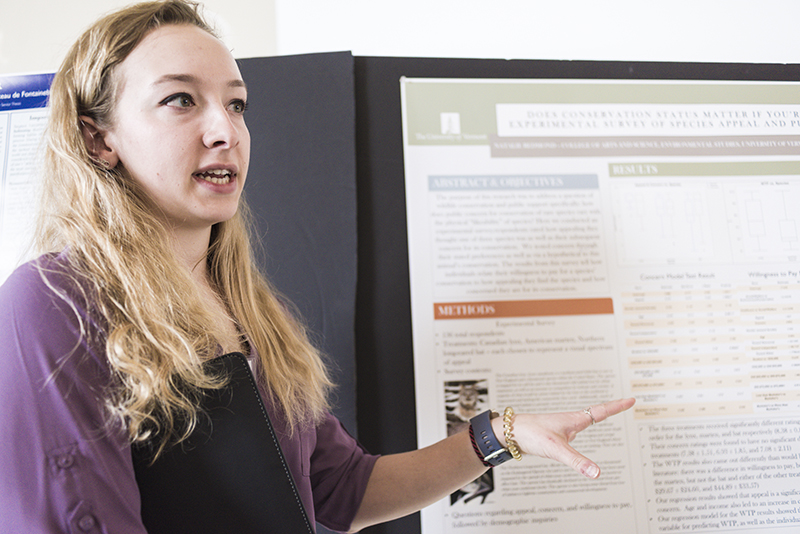 Natalie Redmond ’18, environmental studies major in the Rubenstein School, selected three “poster mammals” for a senior thesis project examining the role an endangered species’ visual appeal plays in inspiring financial support. We can agree that tigers, pandas, and polar bears tug at the heart- and purse-strings, right? But what about the Canadian lynx, American marten, and Northern long-eared bat? Redmond’s surveys found that genuine concern for these particular species was a greater determiner of willingness to help their cause, beyond mere fur-deep appeal. Any good research project leads to more questions. Redmond, who hopes to study conservation biology in graduate school, says she’d like to more deeply explore her data for correlations on political affiliation, education level, and other factors as they relate to financial support for conservation. 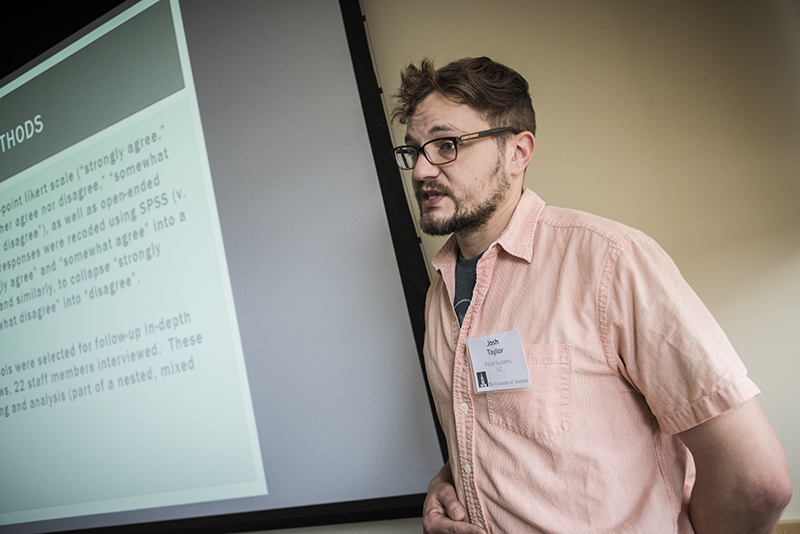 Josh Taylor saw the benefits of producing healthy food for children as a farm manager and teacher in Pennsylvania where he created a nationally-recognized community and children’s education garden. Wanting to test some of his theories, he enrolled in UVM’s Food Systems PhD program and launched a study with Associate Professor Bernice Garnett designed to measure the effects of universal free meals programs at 57 K-12 schools in Vermont. Results of his survey-based study in partnership with Hungry Free Vermont showed numerous positive impacts. Among them: an increase in readiness to learn, reduced food insecurity, better school meal program finances, and improved social climate. “I wanted to know more about universal school meals and how it dovetails with farm-to-school programs,” says Taylor. “I think the convergence of the two is the direction we need to be headed in order to bring healthier food into schools and help local economies.”

Aware that pedometers and fitness tracking devices like Fitbit are ineffective at measuring the activity patterns of stroke victims, junior biomedical engineer major Lara Weed sought a different way to quantify their movements. “People who have strokes often have slow, irregular gait, so it’s hard to measure,” she says. “Our goal was to come up with a way to help evaluate healing in stroke patients so physical therapists can better track and optimize their rehabilitation programs.” With guidance from her faculty advisor Ryan McGinnis, Weed devised a wearable sensor system that uses new algorithms specific to tracking the steps of those recovering from stroke, and presents the data in a simple user interface.

What makes a city more walkable? That’s the question at the heart of civil engineering major Knowles Spofford’s senior thesis. Using publicly available and crowd-sourced data on perceived safety of Boston streets, Spofford has found that narrower streets and those with greater building density promote walking. “Pedestrians feel safer with an enclosed space,” he says. It’s information that urban planners can use to build cities that encourage walking and reduce vehicle use. And after a summer job with the Department of Public Works in Burlington, he plans to head back to Boston, his home city, to work as a civil engineer, equipped with new knowledge about how to plan the walkable cities of the future.