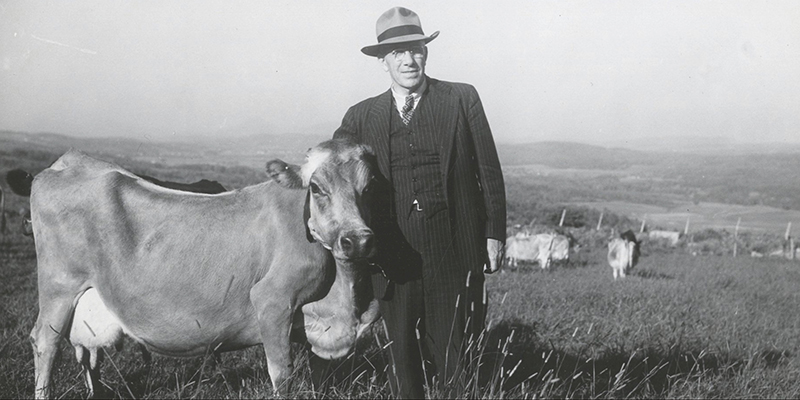 Senator George Aiken of Vermont. As detailed in a new biography, the late Aiken was what is now an increasingly rare animal—a legislator who consistently sought to bridge the partisan divide. (Photo: Courtesy of SenatorAiken.com)

Across more than three decades, from 1941 to 1975, Senator George Aiken was a prominent voice on Capitol Hill during tumultuous times, helping to shape the nation’s course on issues from the Vietnam War to the resignation of President Richard Nixon. And throughout that long political career, from which he retired as senior member of the Senate, Aiken was what is now an increasingly rare animal—a legislator who consistently sought to bridge the partisan divide. A Republican, Aiken ate breakfast every morning with majority leader Sen. Mike Mansfield, a Democrat. (The Vermont senator always kept it simple, favoring an English muffin with peanut butter and coffee.)

"Say We Won and Get Out: George D. Aiken and the Vietnam War" by Stephen Terry ’64 details Aiken’s life and rise to prominence in the U.S. Senate—examining how his approach to politics stemmed from his early life as a farmer and horticulturist in Putney, Vermont. The author, whose credentials include working as a senate staffer for Aiken and serving as managing editor of the Rutland Herald, draws from historical records to weave a tale through Aiken’s early life, his rapid ascendance in Vermont politics, his public service in the nation’s capital, and his evolving views of the Vietnam war. The book includes Aiken’s “Declare Victory and Go Home” speech, in which he never actually spoke those oft-quoted words.

As the Watergate cover-up unraveled and possible impeachment of Richard Nixon loomed, Aiken and other key senior Republicans decided they could no longer support the president. Nixon resigned his office after GOP senators Barry Goldwater and Hugh Scott told the President that the Senate would convict him if the full House voted to impeach.

The book’s inclusion of a 1973 Vermont Life interview with Aiken conducted by a freelance journalist named Bernie Sanders offers a very different echo of today’s political headlines. In his capacity as an Aiken staffer, author Steve Terry was at the senator’s side for the interview as Sanders asked Aiken about the changing nature of Vermont, about businessmen running government, about corporations taking over Vermont businesses, and about all of the presidents that Aiken served with.

The story of George Aiken’s life and politics couldn’t be told without including a close look into the role of his second wife, Lola. The daughter of a Barre granite worker, she was also deeply rooted in Vermont and was a fierce advocate for her husband and his legacy for years after his death in 1982. Lola Aiken passed away in 2014 at age 102.

The Aiken biography is published by the Center for Research on Vermont and White River Press with support from the Silver Special Collections Library and Continuing and Distance Education at the University of Vermont’s George D. Aiken Lecture series.