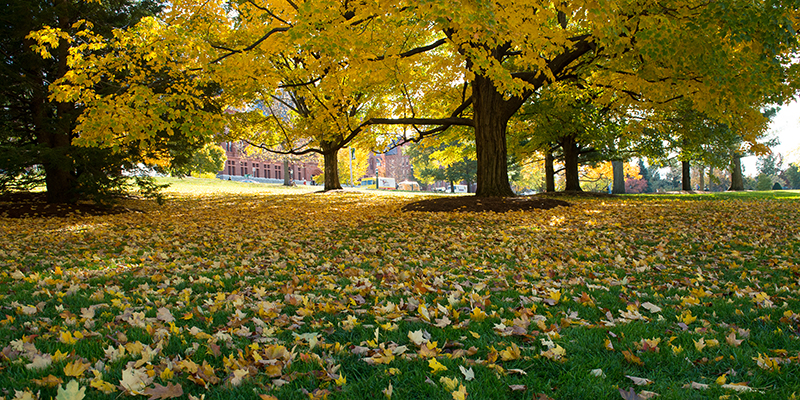 We remember and honor all of those who lost their lives on September 11, 2001, including the following UVM alumni.

“was not afraid of life, was passionate about it and lived every minute of it,” a family member told the Staten Island Advance. Bartels, who earned his MBA at the University of Vermont, was a partner at Cantor Fitzgerald and was CEO of his own dot-com company, CO2E.com, which helped other companies and governments reduce emissions worldwide. “Carlton was one of the top five people in the world in his industry,” said his wife, Jane Bartels. He had a strong sense of fun, was an avid outdoorsman and cook, and was devoted to his family life with Jane and their two daughters, Melina and Eva.

grew up in the countryside of western New York, but was drawn to the business world and the pace of New York City. He took a job as an equity trader with Cantor Fitzgerald after earning his degree at UVM. Twelve hour days were standard, as was the good life of a young man in New York City. His father notes that Buchanan often had plans to see the Knicks or the Yankees play. Following the September 11 tragedy, several of Buchanan’s friends from his days at UVM headed to Manhattan, where they joined in the search, passing photos around, and scouring hospitals for their friend and fellow alum.

was on the 84th floor of Tower 2 when he and a co-worker went to the aid of a man in distress, Cascio’s aunt Diane Regan Stuart reported. “That is something Paul would do. His instinct was always to help others. He is a hero in the truest sense of the word,” Stuart said. She added that Cascio’s years at UVM were “some of the happiest in his brief but full life.”

was remembered as a big-hearted man who had put family at the center of his life. “We have a very large extended family, and Bob was kind of the glue,” cousin David Lawrence told the New Jersey Star-Ledger. “The most important thing to him was his daughter, son, and his wife. And all the rest of his family.” Lawrence was married to fellow UVM alum Suzanne Burns ’82. He had just started a new job with investment banking firm Sandler O’Neill & Partners, with offices in the World Trade Center, on September 10.

transferred to New York University after beginning his studies at the University of Vermont. Though he was on campus for just one year, Mirpuri made many friends in Burlington and is fondly remembered by those who came to know him. Mirpuri worked in midtown Manhattan, where he was vice president of sales for the financial software firm Data Synapse, but was attending a financial technology conference at the World Trade Center the morning of September 11. Friends described Mirpuri as a man who loved the Manhattan nightlife and fine dining, but who was also devoted to his family, his Hindu faith, and volunteer work to benefit the elderly and homeless.

called his wife, Alyson Becker ’92, as he tried to escape from the 104th floor of the World Trade Center. Fleeing down the stairwell, he told his wife that he loved her. The couple had been married just short of one year, and their October 2000 ceremony had included many of their friends from undergraduate days at UVM. Murillo, who worked as an equity salesman for Cantor Fitzgerald, studied political science at the university and was a member of Sigma Phi fraternity. A native of Colombia, Murillo was also very active in building community for students of color at UVM, and was a founding member of the Alianza Latinx student group.

came to UVM with a passion for basketball and left focused on a career in the business world. A sophomore-year field trip to the New York City financial markets inspired Niederer to study business, and after graduation he quickly landed a job right where he wanted to be — working on Wall Street. A year ago, Niederer was recruited to work for Cantor Fitzgerald and he was at his desk early, as usual, on September 11 when Tower 1 was hit. Former Catamount coaches and teammates numbered among the many at a memorial service held in Niederer’s hometown of Annandale, N.J.

loved to take friends visiting New York City up to the deck atop the World Trade Center, five floors above his office. He was in his office at Cantor Fitzgerald when the first airliner hit the north tower. Attending a candlelight prayer service held at a local church in Piver’s hometown of Stonington, Conn., his friend Leah Dann told a New York Times reporter, “He’s the most easy-going, fun-loving guy. Everyone got along with him. I’ve never known him to argue with anyone, even raise his voice. He’s just the best.” Piver earned his UVM bachelor’s degree in economics and started work at Cantor Fitzgerald shortly after graduation.

was hired by TradeSpark, a division of Cantor Fitzgerald, as a broker’s assistant in June. The art major had moved to New York two months following graduation with hopes of working as a professional model. When that path didn’t appear to be opening, Ropiteau, who also studied economics at UVM, had begun the transition to the financial industry. His classmate Joshua Piver had helped Ropiteau land the job at Cantor Fitzgerald, and both members of the Class of 2000 were on the 105th floor of Tower 1 on the morning of September 11.

worked in Cantor Fitzgerald’s offices on the 105th floor of the World Trade Center. Shortly after one of the hijacked planes hit the tower, Sellitto called his father. “Matthew will be remembered as full of faith and full of love with a strength that led him in his final moments to call his father to say, ‘I love you all,’” said the Rev. Anthony Carrozzo at a Mass held for Sellitto in Harding Township, N.J. In a tribute to his older brother, Jonathan Sellitto dedicated the song “Brokedown Palace,” by the Grateful Dead, one of Matthew’s favorite bands. “Fare you well, fare you well/I love you more than words can tell/Listen to the river sing sweet songs/to rock my soul.”

was a managing director for investment banking firm Sandler O’Neill & Partners, where he had worked for five years. He was in his office on the 104th floor of the World Trade Center’s Tower 2 on the morning of September 11. His wife, Martha Oliverio Wright (also a member of UVM’s Class of 1989), said that her husband called her after the first WTC attack and minutes prior to the plane hitting his building. “His voice was calm and he told me that he was all right. He said that he would call me back later, but I never did get to speak to him again.” Wright lived in Rockville Centre, N.Y. with his wife, and their three children, Emily, Robert, and John W. III, who was three weeks old in September 2001. Martha Wright said that in addition to spending time with his family, her husband enjoyed boating, fishing, and skiing.