From Marine to Doctor 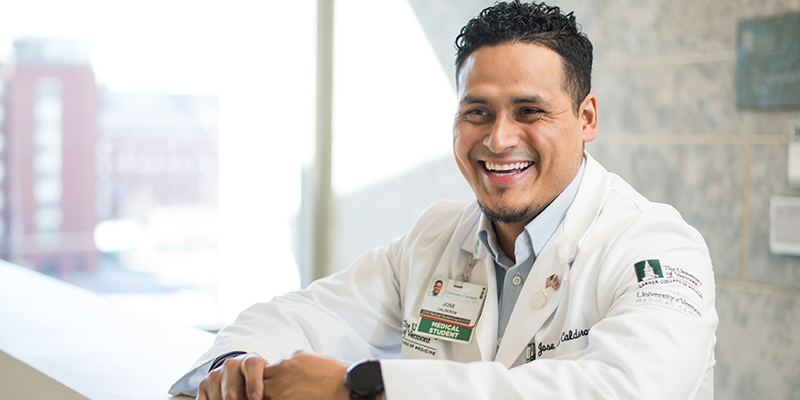 A veteran and first-generation college student, future doctor Jose Calderon is committed to serving where he is needed the most. “I want to work in an underserved, low-income, urban community, and I want to work with a Spanish speaking population,” says the Class of 2022 Larner College of Medicine student. “I think I can make the biggest impact there.” (Photo: Andy Duback)

When Jose Calderon was six years old, his mother began exhibiting symptoms of schizophrenia. As he watched her cycle in and out of psychiatric units – sometimes enduring run-ins with law enforcement and negative encounters with neighbors and members of their church - he came to understand how the stigma associated with mental illness can devastate a family already struggling to cope with a brutal disease.

Years later, fresh out of high school, he joined the U.S. Marine Corps and went on to serve two tours of duty, one a combat mission in Afghanistan. Peers were killed in action, and others returned home only to suffer through post-traumatic stress disorder.

These two seminal experiences helped to propel him on a career path that led to UVM’s Larner College of Medicine. “I’m a first-generation college student, first-generation medical school student,” he says. “I came here fresh and with an open mind, willing to adapt and overcome.”

It wasn’t an easy path: Growing up in a low-income neighborhood in Houston touched by crime and gang violence, there weren’t many role models. His father instilled in his three children a love of learning and a strong work ethic, despite his own education in El Salvador ending at the third-grade level.

“I remember him expecting us to have our homework done by 8 p.m,” he says. “It was a matter of being accountable to ourselves. He really valued education.”

Calderon’s father came to the U.S. from El Salvador as a teenager, desperate to escape the vicious civil war unfolding in that country. He found work as a construction worker and met Calderon’s mother, also a native of El Salvador, in Houston. Calderon’s first language was Spanish; he learned English when he entered elementary school. His older twin brothers helped to keep Calderon focused on achieving his goals.

“It was a challenging childhood,” he says. “I owe a lot to them being on the right path, and me trying to emulate them.”

Calderon’s decision to enter the Marine Corps was a tough one for his father, who, after witnessing the devastation war brought to his home country, struggled to understand why his youngest child would volunteer to put himself in harm’s way.

But Calderon says his military service gave him courage and confidence. On his first tour of duty, he traveled around the world, improving military training and tactics while also conducting humanitarian missions in far-flung locations like East Timor, Thailand, Djibouti, and Kuwait. As he painted primary schools alongside local residents and helped to distribute potable water, he realized just how much he had to contribute, especially in communities with the greatest need.

Serving in Afghanistan strengthened his resolve to make a difference.

“I think you’re forced to mature at a young age,” he says. “You learn to value life differently than others at that age. It’s a powerful experience, being there and doing your best to handle stressful situations.”

His time in a combat zone also gave him a window into the medical field. He remembers a time when his unit was being hit particularly hard by enemy fire, and personnel were asked to gather at a medical site to give blood. As he waited, an injured Marine arrived by helicopter. A roadside bomb had exploded while he was on patrol with his platoon; he had suffered traumatic injuries including three amputated limbs. Calderon remembers the seamless communication and sharp decision-making of the surgical team as they saved the Marine’s life. Watching those surgeons work was key to sparking his interest in medicine, he says.

After his four years of military service, Calderon studied psychology at the University of Southern California. A minor in healthcare studies, an assistantship in USC’s Culture and Mental Health Research Lab and volunteer work in the emergency department at L.A. County General Hospital in East Los Angeles all helped him prepare for the career he envisioned.

The decision to come to UVM’s Larner College of Medicine was based in part on the school's mission statement and emphasis on active learning in medical education, but even more on the sense of community he experienced when he visited the campus and Burlington.

Although he has yet to decide on a specialty – he’s considering psychiatry, family medicine and emergency medicine - Calderon is committed to serving where he is needed the most. “I want to work in an underserved, low-income, urban community, and I want to work with a Spanish speaking population,” he says. “I think I can make the biggest impact there.”