A Life of Learning 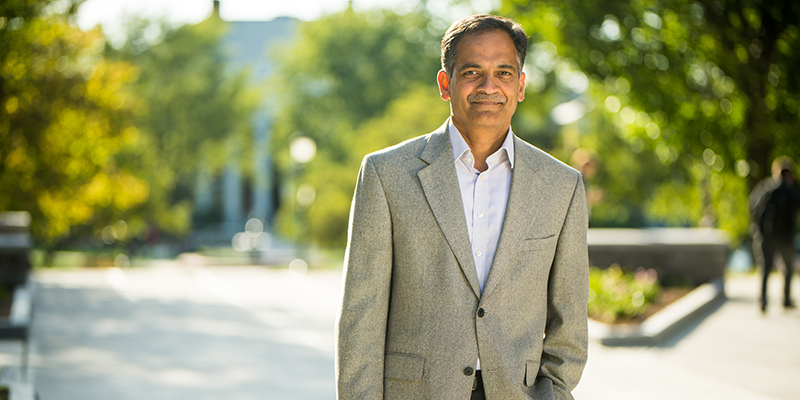 Granted, stating that a university president is pro-education might be filed under things we could really just assume. Right? But listen to Suresh Garimella at a public event or talk with him in conversation, and you sense a critical shade of difference—gratitude for education’s impact on his life is core to his character. And commitment to pay that forward, to just as great an extent, has been a driving force in his career, from peer advisor as an undergraduate in India, to a professor of mechanical engineering and academic leader at Purdue University, to his new role, the University of Vermont’s twenty-seventh president.

Last February, meeting the campus community for the first time at a forum in the Davis Center, Garimella spoke to what intrigued him about leading UVM. Among the attractions, coming to the home state of Justin Smith Morrill, the Vermont senator who advocated for the 1862 Morrill Land-Grant Acts, a milestone in making higher education more widely accessible across economic class and leveraging the knowledge of universities in support of their communities. “Creating the land grant university system was one of the greatest experiments in higher education,” Garimella said.

In April, during an interview at his office in Purdue University’s Hovde Hall, he reflected, “I was brought up in a public-school environment. Middle-class family, so public schooling, both in high school and in college, means a lot to me.” Raised in Bhopal, at the geographic heart of India, Garimella’s family later moved to the southeast region of the country. Throughout his childhood, passionate, committed teachers were a formative influence on him, regardless of the subject matter. “I loved them all; they were wonderful. So much so that by the time I graduated from high school I could have imagined pursuing English literature, history, medicine, or engineering.”

Garimella’s father, Sastry, worked as an engineer; his mother, Radha, was at home, with a laser focus on her three children’s educations. Garimella remembers her vigilance over their homework: “Nothing was more important to her than our studies.” Suresh’s brother, Srinivas, is a professor of mechanical engineering at Georgia Tech; his sister, Usha, recently retired as a director at SC Johnson. “I don’t think we’d be where we are without that support for our studies,” Garimella says. “What my parents had to bequeath us was education, which they did in spades.”

That ethic passed to the next generation. Suresh and Lakshmi Garimella’s home in West Lafayette, Indiana, included a den with a large desk for Suresh and two smaller ones for daughter, Shruthi, and son, Sanjay. While Suresh graded tests or wrote articles, Lakshmi Garimella shares, the kids did their homework, dad at hand to help.

When Garimella graduated from high school, engineering prevailed among his diverse interests, gaining admission to the Indian Institute of Technology, Madras, among the most highly competitive universities worldwide. That passion for learning took root. “I enjoyed classes, which was kind of an odd thing,” he says. “It was fashionable to say you didn’t care about class and be all cynical about it. I wasn’t.”

Looking back, Adult Suresh reflects that maybe College Suresh could have allowed himself just a bit more fun, beyond the study breaks he took for tennis or roller-skating. Outside of the classroom, the most lasting impact of Garimella’s college years was found working as an advisor in a peer guidance program. At a university where students faced enormous stress to measure up academically, Garimella embraced the work of helping peers navigate personal and academic issues. Years later, as a faculty member, building those kinds of connections with his students would be fundamental to his teaching approach. 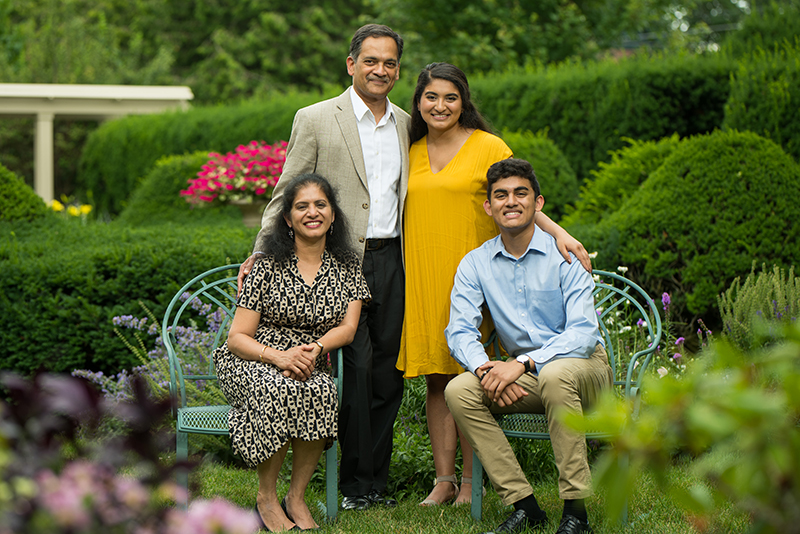 The Garimella family. Suresh has been married since 1993 to Lakshmi. Daughter, Shruthi, is a junior at Purdue University; son, Sanjay, entered Purdue this fall.

Ask a handful of Suresh Garimella’s Purdue University colleagues to give you a sense of him, and some consistent themes emerge. Family man, above all. Engaging. Widely read. Lover of the arts. Meticulous. Honest. Bright, but also wise. Sharp-witted. A mover. “Fasten your seat belt,” says Marietta Harrison, professor of pharmacology and special advisor for strategic initiatives in the Office of the Executive Vice President for Research and Partnerships. “Suresh sets a fast timeline and a high bar.”

Ask Suresh Garimella to give you a sense of himself, and you’ll get reluctance bordering on resistance. Posed with a question about his childhood, he says, “I’m not good at this. So, I will tell you that I don’t talk a lot about myself… ever.”

There is some valuing of his privacy in that, of course. But there is also, one senses, something along the lines of bemusement at the fuss of having a “presidential profile” written, portraits taken. He doesn’t seem much for the trappings of leadership. He says at one point during our interview at Purdue, “I still don’t consider myself an administrator. And I don’t mean that in any other way than that I feel, fundamentally, I am a faculty member.”

Eventually, Garimella concedes and rattles off a few of his avocations. Reading: historical fiction to biography to that ever-growing stack of issues of The Economist. Movies: Dr. Zhivago is his all-time favorite; he’s watched all of Greta Garbo’s films. Gardening: “I’m not a fancy gardener, a master gardener, by any means, but I have some luck with plants.” But the schedule of a vice president or a president doesn’t allow much time for tomatoes, Garbo, or The Economist, Garimella acknowledges. He will not be rototilling the back lawn of Englesby House anytime soon.

As Garimella rose through the faculty ranks at Purdue, he began to think more broadly about how science could impact policy. A Jefferson Science Fellowship in the U.S. State Department in 2010 presented the opportunity to put that thought into play. As a Jefferson Fellow, Garimella offered his perspective as science advisor on foreign policy issues around world events such as the Fukushima nuclear disaster or rare earth mineral disputes between China and Japan. Under other Obama administration initiatives, Garimella worked to identify opportunities for academic engagement with Muslim-majority countries, build a higher education dialogue with India, and help share clean energy and climate change expertise with Latin American nations. In 2018, Garimella was appointed by President Trump to the National Science Board, which oversees the National Science Foundation and also serves as an independent body of advisors to both the president and Congress.

Similarly, Garimella’s administrative leadership roles at Purdue focused largely upon better connecting the university with the world beyond campus. Mitch Daniels, governor of Indiana for eight years prior to becoming Purdue’s president in 2013, gave Garimella wide latitude to develop initiatives. The university forged diverse partnerships—from the auto industry to the government of Colombia—often with the related benefits of enriching the academic experience of students and boosting Indiana’s economy. Putting it simply, Garimella says, “We sought to bring Purdue’s assets to bear on the community. I was a convener.”

His essay titled “Expanding the Global Reach of the Twenty-First Century Research University” in Science & Diplomacy shares Purdue’s work on this front and also offers a look into Garimella’s vision of how that nineteenth-century American land grant ideal might be realized in our twenty-first-century global landscape.

“Yet another driver for our global engagement—indeed an overarching reason for it—is the potential exposure to new problems and new ideas that increase our knowledge, creativity, productivity, and impact. While pure intellectual curiosity often undergirds the desire for global engagement, the recognition of multiple vantage points from which to assess challenges can make us more agile and innovative,” he writes. 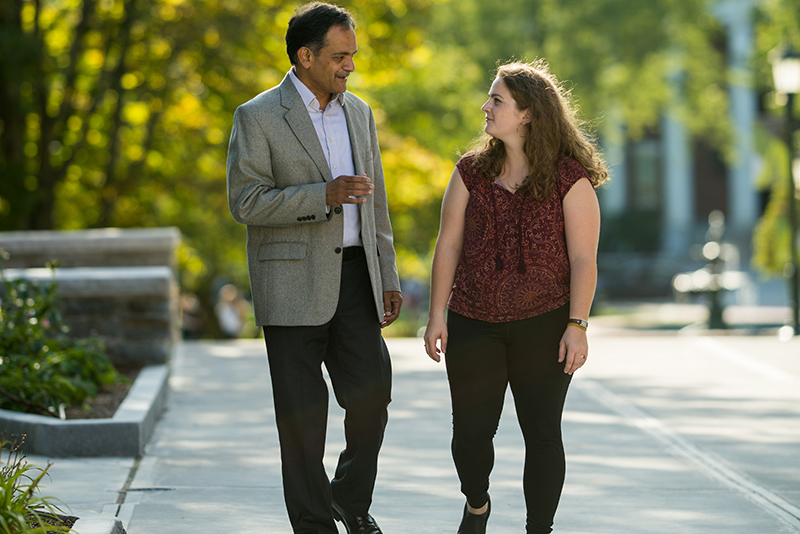 Among the multiple roles and titles Garimella has held throughout his thirty-year career in academia, there is none he values as deeply as teacher. Mentor to nearly a hundred graduate students across the years, Garimella notes that twenty-seven alumni from his research group are in faculty positions worldwide. “Training students to be faculty members is the most comprehensive training you can give them,” Garimella says, and suggests being part of that chain of knowledge is an academic’s most lasting legacy.

Certain Purdue undergraduate engineering students, those who preferred a seat in the back row and the comfort of relative anonymity, might have squirmed a bit in Professor Suresh Garimella’s classes. He connected names and faces in the first weeks of the semester and pushed students to come in and meet one-on-one during office hours. “I wasn’t doing this to impress; I just care about them,” Garimella says, an echo of his undergrad years as a peer counselor. “I think I’m better at that personal interaction than I am at science.”

Student success, coupled with boosting the research enterprise and reaffirming the land grant mission, is at the top of three refrains emerging in the first months of Garimella’s UVM presidency. As priorities are set and decisions are made, their impact upon providing the best possible education and experience for students will be the primary filter.

Though UVM faces some particular challenges in regard to funding and declining numbers of high school students in the northeast, Garimella notes that many of the issues are the same across American higher education. Take tuition, where Purdue drew a line by not raising the rate across the past seven years. “At some point, what gives?” Garimella says. “You can’t just keep increasing the tuition. We need to research options, think of efficiencies, think of other revenue sources, different ways of doing business.”

As he gets to know the institution he leads and begins to chart that way forward, there are many people to meet. Students and faculty in line for lunch at the Davis Center. Business leaders at luncheons in Vermont. Legislators in the marble halls of Montpelier and Washington, D.C. Alumni at receptions in New York City. Catamount fans in the bleachers of Virtue Field. It’s a part of the process that Garimella especially embraces. Learning, broadening his viewpoint, is essential to who he is. “I could talk to anyone for a long time. Everyone has interesting perspectives,” he says. “You’re making me talk today. But usually I’m the one asking the questions.”