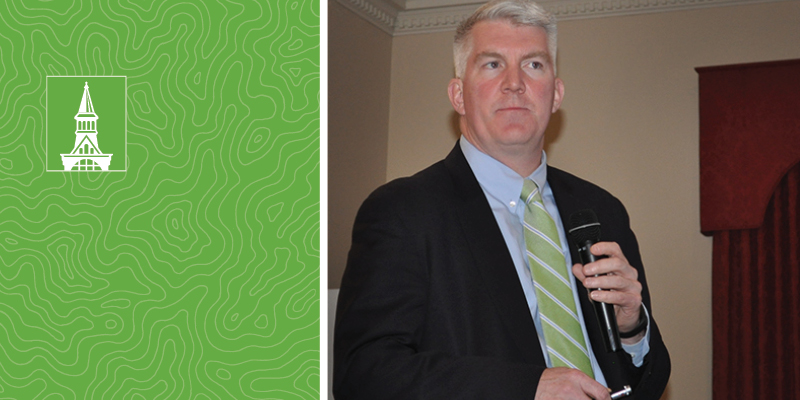 Town administrator in Westfield, N.J., for the past 19 years, alumnus Jim Gildea is helping lead the community through the pandemic. "During times like this, we need the government to work better than ever," he says. Photograph courtesy TAPintoWestfield.net.

Jim Gildea ’92 began his work as town administrator in Westfield, N.J., two months before September 11, 2001. A community of 31,000 just a 20-mile drive from the twin towers of the World Trade Center, Westfield lost twelve citizens that day. In his leadership role, Gildea has also helped the community cope and move forward in other times of crisis, from the economic freefall of 2008 to Hurricane Sandy.

Today, Westfield is in the thick of the coronavirus pandemic’s Metro New York red zone. Speaking to the challenge of the current situation, Gildea says, “In reality, this is almost a combination of all of those things we dealt with in the past. But with those previous events, you knew that in a number of days it would be solved. Roads would be cleared, the power would be back on after the storm. But with this, the main difference is there is no clear end in sight.”

Gildea’s roots run deep in Westfield, his hometown where his parents still live. His first job for the city was as a lifeguard in high school. After college at UVM, he returned to first work in recreation, then move into the town administrator role. (His roots also run deep at the University of Vermont, where he majored in small business management in the College of Agriculture and Life Sciences. His sisters Katie ’03 and Cristin ’95 are also graduates, and he admits to hoping his daughter, a junior in high school, might become a next-generation Catamount.)

The police chief, fire chief, and town health officer are among the unit heads who report to Gildea. He praises their heroic efforts on the front lines, mentioning with pride that Westfield assisted in establishing the first coronavirus testing site serving the 21 towns in Union County. Gildea continues to work from the town’s city hall daily. Offices such as the town clerk and tax collector have employees working solo in shifts to protect their health. “We’re making sure the gears of government can still work,” Gildea says. “During times like this we need the government to work better than ever.”

Before the pandemic hit, Gildea was poised to present the town budget, approximately $50 million, for the next fiscal year. But as civic revenue streams shut down, it’s a shifting outlook. Gildea is reassessing, considering next steps and hard decisions to help the town emerge strong on the other side of the pandemic. Those Westfield roots keep him focused and positive. “One of the benefits of serving in the town where you live is you get to see and make changes where you live, in the places you care about,” Gildea says. “Together with the people I work with, that’s what keeps me going every day.”