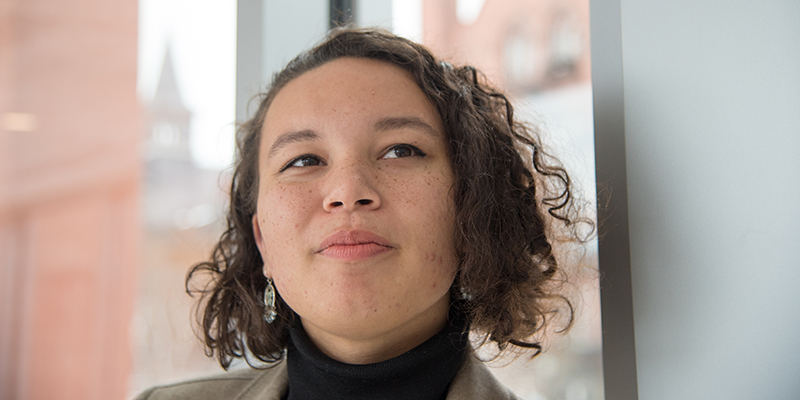 Dia Brown, an environmental engineering student and founder of a UVM chapter of the National Society of Black Engineers. For this sophomore, the traditional work of the engineer can only be judged successful if it deeply considers social justice. “The thing that keeps me up at night now is I see all of these intersections,” she says. “The environment, social justice, and STEM—I think about them together.” (Photos: Josh Brown)

Dia Brown would like to solve some hard engineering problems. In fact, she’d like to solve some problems that many conventional engineers wouldn’t think of as belonging to their field. “Like how do we make new apartment buildings environmentally sustainable and healthy,” she asks, “while allowing the folks, low-income folks, who live in that neighborhood to stay and thrive?”

For her—a sophomore majoring in environmental engineering—the traditional work of the engineer to develop the smartest, most elegant, budget-conscious design can only be judged successful if it deeply considers social justice.

Which helps explain why—while taking the full load of foundational courses in engineering—she’s founded a UVM chapter of the National Society of Black Engineers; worked as an intern for the climate-change organization 350.org; met with students of color at Winooski High School to encourage them to pursue engineering in college; and put important questions in front of other students and the faculty in the College of Engineering and Mathematical Sciences.

“Who's invited into the space we call engineering?” she asks. Then she turns this question on its head. “Who doesn't think about engineering as a pathway? It’s not the people from multigenerational families with engineering backgrounds, who are relatively affluent, and relatively whiter.”

Brown grew up in an affluent county outside of Washington, D.C., “but there were still people there who were homeless and who had to fear getting shot,” she says. Her grandfather was a farmer, and her father, who largely raised her, is a construction worker. “When I helped my dad at work, I felt sad because I saw all of these really environmentally detrimental products and toxins that go into construction,” she says, “and I think this work could be healthier for the people who do it and also for the people who live in those places that are built.”

Brown also grew up near the Chesapeake Bay and fell in love with its beautiful-but-polluted tidal marshes and waterways. At 14, she founded Crochet for the Bay, a volunteer group that crochets and sews clothes and toys to fundraise for conservation work on the Chesapeake.

It was Brown’s beloved history teacher who said to her, in her first year of high school, “I know you want to do ecology, but you should look at environmental engineering,” she recalls. The teacher and that moment were transformational. “Before that, I didn’t even know what engineering was,” Brown says.

“The thing that keeps me up at night now is I see all of these intersections and how everything's woven together, but we’re told they are separate,” she says. “The environment, social justice, and STEM—I think about them together.” 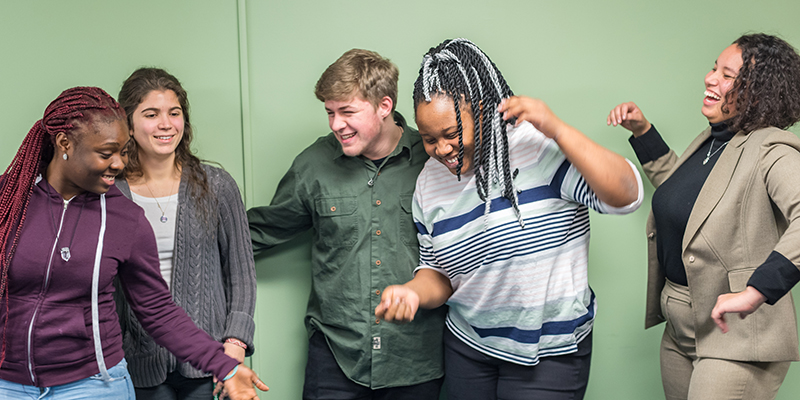 On a Friday evening, after class, Dia Brown is leading the weekly meeting of the UVM chapter of the National Society of Black Engineers, above. Well, really, tonight, “we’re just chilling,” Brown says, as she and seven or eight fellow members of the group tell jokes and eat sandwiches. Most weeks, “I want to get things done, have an action agenda,” she says, laughing even more, but her co-members reminder her: “how are you expected to be a community if you're not building a community?” she says. Sandwiches and jokes help.

“We want everyone to feel welcome here in NSBE. Everyone,” says Elyon Eyimife, a junior electrical engineering major and the vice-president of the student club. She pauses to consider her words, turning her henna-red braids in her hand. “And as the UVM community works to increase the diversity on campus, I feel like our club has something to give: a comfortable space. We want to welcome everyone and we want our club members to really be part of this community, to make a good home here.”

Which is what Dia Brown hopes to create as an engineer: good homes. “Right now, my passion is sustainable row housing,” she says, “not just environmentally sustainable, but deeply sustainable for the whole community.” She thinks that environmental engineers are unlikely to succeed by just considering the design of a building, but must confront the arrangement and racial politics of cities. “American cities are still very much designed through redlining districts,” Brown says. “And that’s an unsustainable design because, like, how are you expecting a community to thrive when on one block you have extreme poverty and then a block over you have multimillion-dollar houses?” Dia Brown, it seems, is figuring out how to be an engineer who considers both the buildings and the intersections.