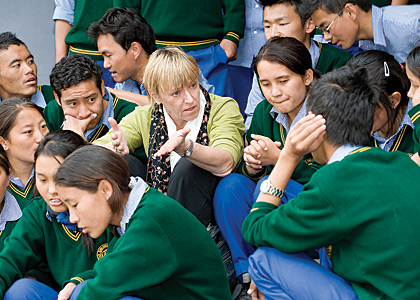 Milestones are many for Jody Williams ’72 these days. It’s twenty years since the founding of the International Campaign to Ban Landmines. Fifteen years since the Mine Ban Treaty was signed by 122 nations. And fifteen years since the Oct. 10, 1997 morning when her phone rang with the news that she and the ICBL had been selected for the Nobel Peace Prize, a call that would bring international media up an unlikely mile-long dirt road in Putney, Vt., and change Williams’ life immeasurably. All are captured in My Name is Jody Williams: A Vermont Girl’s Winding Path to the Nobel Peace Prize, just published by the University of California Press.

Williams currently co-chairs the Nobel Women’s Initiative, which brings the shared influence of the six living female recipients of the Nobel Peace Prize to bear on issues of peace, justice, and equality, work that includes their current focus on an international campaign to stop rape and gender violence in conflict. Last May, she also helped launch a campaign to halt the use of fully autonomous killer robots. The many working on this effort include her husband, Stephen Goose, a colleague in the land mine work and current director of the arms division of Human Rights Watch.

Vermont Quarterly editor Tom Weaver talked with Williams on the phone the morning of December 12, shortly after she’d returned home to Fredericksburg, Va., from a long round of travel that took her to Geneva and Berlin for anniversary events. After excusing herself early in the conversation to take a moment to let her German shepherd Sophie in from the yard and towel off  her muddy paws, Williams fielded questions with her typical frankness and humor.

VQ: Why did you want to write the book at this point in your life?

Williams: Too often for my taste, giants of change are stripped of the flaws, weaknesses and complexities that make us all human and the focus is solely on their strengths. Then, all buffed up and made almost earthly saints, they are put on a pedestal where they seem far beyond the reach of “ordinary” people. They become intimidating and hard to relate to and it’s hard to believe they are or were as human as we are or that we mere mortals could ever accomplish such things, too.

In all honesty, I wanted to write this book because I know how many people think they are powerless in this world with so many issues challenging us. I know they are not. They just need to understand about activism and change and that we all can find ways to contribute. I am an inspiring speaker—much comes from the fact that I talk straight with people. I do the same in the book. I am who I am, and I don’t try to pretend I’ve not made good and bad choices like everyone else I know. I think I help people realize that they, too, can make changes in the world without having to turn into a saint to do it.

You’re candid in the book, and have said the same in past talks at UVM, that you were in search of a major and a focus during your college years and didn’t really find it until years after your graduation. Do you think that’s an important message for students to hear?

Yeah, I don’t think you have to decide who you are when you’re eighteen, for god’s sake. I think there is too much emphasis these days—at least from my perception outside—that you have to know what you want to be, that you should really try to do something that can earn you tons of money, and that you should, you know, “stay on the path.” I think that helps to diminish critical thinking and makes students really narrowly focused.

How was it working on the book? Do you enjoy writing?

Yes. I haven’t in a while, but I also love writing poetry. I have a stack of poems from different periods in my life and I’d like to get back to that. I, obviously, do lots of political writing. There are a few things I do well, I think. I’m a good writer; I’m very good at building coalitions; and I’m an excellent public speaker. I believe you should focus on what you do well, because there is not that much time in life to try to perfect things you can’t do. For example, I’m not a good manager of staff. I suck at it, frankly. I knew I just couldn’t do it, didn’t want to do it, so I didn’t do it.

You mention being petrified for your first public speaking experience?

I don’t know many people who actually are thrilled the first time they speak publicly.

True enough. I was looking at your TED Talk and it’s clear that you have that ability to just “talk” rather than “deliver” a speech.

Yes, I think I’ve only delivered a speech twice. One was in Japan where they insisted I had to write something so they could translate it. It was horrible, just staring at the paper and reading it aloud. Really terrible.

You write in the book, “For me, receiving the Nobel Peace Prize hasn’t been all joy and wonder. At first I was perplexed about how to understand it in relation to my work…” Tell me about that period and how you came to terms with it.

Just because one can speak coherently in public does not mean that one is an extrovert, right? If I tell people that I’m an introvert they look stupid about it, to be honest. Then I have to take a lot of time to explain what an introvert is, that you can still develop a public persona — which doesn’t mean that you wouldn’t rather be sitting home reading a book.

I had been very happy coordinating the campaign. I saw the job as I described it in the book; everybody knew what they were supposed to do. I spoke, certainly, but the focus wasn’t on me. But then, suddenly, with the prize I was the only one people wanted to speak to. And that enraged me for everybody else in the campaign who had always had a voice. Suddenly, we’re looked at like I had this gigantic staff or something, instead of that we were colleagues in the movement.

That angered me a lot on behalf of all the people who made the ban happen. That wasn’t just me; I was part of it. That lack of understanding made me nuts. Also, all of a sudden, I am invited to speak as a Nobel Laureate. I didn’t know what that meant. What did that mean?

One time I was together with Archbishop Tutu at a Nobel conference in Virginia, and somebody asked him what changed after the Peace Prize. He said, “Before I spoke about the same things over and over and over, and nobody listened. Suddenly, I got the Peace Prize and everything I said was a pearl of wisdom.”

I didn’t like that. I didn’t know what to do with it. I cried a lot the first few years. I’m not the only one (laughs), but I won’t say who else cried. It was just confusion. Sometimes I’ll still come home and cry, but it’s not crying the same way. It just takes so much of my energy to do these things that I come home and kind of fall apart. The longer I’ve been on the road, the longer it takes me to be alone at home and get some more energy to go back out and do what I have to do.

In the book you write about effectively using a fax machine as a “techno-sexy” way to advance the work of the ICBL. That feels like a long time ago, I bet. Have you continued to harness technology in ways that aid your work?

Sure, I tweet and do all that stuff. I still see it as a tool; I don’t see it as an end in itself. I say this when I public speak: People who think that signing a petition online is activism, don’t understand activism. They massage their sense of having to do something by pushing a button on a petition and feeling they’ve done great good in the world. I’m not saying they’re not useful tools. But to believe that is activism, I think, is a little dangerous.

In Egypt, for example, when there was this sense that the movement that got people into Tahrir Square was all about the cell phone—it wasn’t. The cell phone was a tool to communicate with other people so they’d turn out at the same time. If nobody had turned out into the square, there would have been no movement. I spend a fair amount of time trying to get people to understand that.

You mention that you’ve come to see your role as “an international social worker.” What do you mean by that?

A social worker, in theory, is trying to advance the needs of human beings in their community or in their home, getting their basic needs met at least. And I guess that is what I do in the world. I believe in human security, not national security. Not that there shouldn’t be national security, but I think that the emphasis should be on human security — which means serving the basic needs of individual human beings, not protecting the structure of the state. So it’s kind of the same to me. I didn’t think about it this way until I taught at the Graduate College of Social Work at the University of Houston.

You’ve spoken out on the need to reclaim what “peace” means. Could you elaborate a bit on this?

You know the terms — peacenik, tree-hugging liberal, all that ridiculousness — those are words that try to emasculate and disempower people who believe that sustainable peace is a possible reality. It is to make you look like a weakling, somebody who “doesn’t get it.” I think that we need to tackle that head on and affirm that building peace is damn hard work and that you have to do it every day.

I give the examples of Martin Luther King and the years in the streets and the people he helped motivate to work against racism, or Mandela, or all the icons you can name in the world. What they did was hard work every day. They didn’t sit around and sing “Kumbaya” for god’s sake. They were strategizing. They were putting their bodies on the line. If you think that’s wimpy and tree-hugging and a peacenik, then I don’t know how you think.

This interview appears in the spring 2013 issue of Vermont Quarterly magazine. Read an excerpt from Williams' book on the VQ website.