An Idea that Sparked a Business 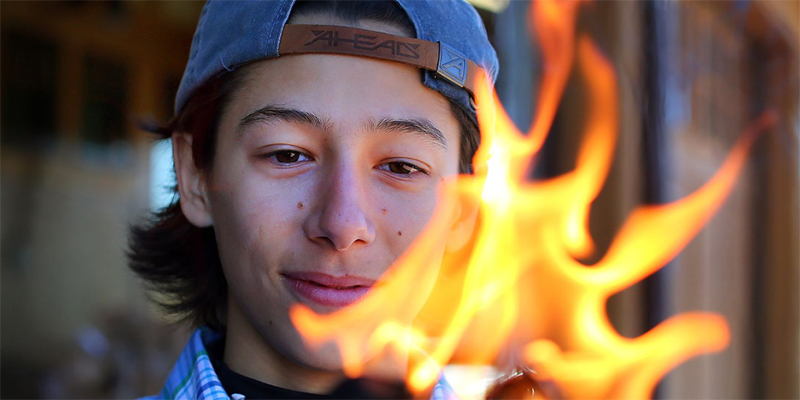 Adam Liszewski ’22 founded Stokes Natural Firestarter, an all-natural, chemical-free firestarter, in high school. Today the busy student and CEO is juggling school, work and wants to help other young entrepreneurs get their ideas off the ground.

Adam Liszewski ’22 has put out a lot of fires in the past five years it’s taken him to get his business off the ground and into nearly 700 stores. But it’s safe to say that as the CEO of Stokes Natural Firestarters, he’s probably started far more — for his customers. Stokes are environmentally friendly firestarters made from a combination of natural and recycled materials like sawdust, paraffin and egg cartons.

Though his schedule is jam-packed now — juggling school, Stokes, Entrepreneurship Club, the UVM Freeski Team and recreational sports — he’s got his sight set on the freedom of running his own business in the future. “When I started Stokes, my real dream was that I didn’t want to have a boss, I didn’t want to be under anyone and I wanted to have my own schedule. I want to continue doing that as long as I can,” said Liszewski at a virtual panel he recently spoke on about being an entrepreneur in colleges as part of Boston Startup Week.

The junior business administration major concentrating in entrepreneurship and marketing keeps a close eye on sales, marketing and production and oversees upwards of eight employees, all while attending the Grossman School of Business. “When you come into college, find that one professor you really get along with who’s in your field. Go to them, talk to them, share the idea. They want to see you grow,” he advised viewers.

Liszewski developed the concept for Stokes in high school when he noticed how often his family struggled to light fires with plastic-wrapped starters on the first go. “Ever since I can remember, we’ve heated the majority of our house with wood. We have a woodstove, fireplace, we cook a lot of our food over open-wood fires,” he says. “Every year after the winter ends, me and my dad would always go around and collect firewood and build our piles for the next winter.”

It’s a product that symbolizes a lot to Liszewski, but for most others it’s an effective solution to an annoying problem. The small starters were originally designed with dryer lint and made to go in Christmas gifts for family friends, alongside mom’s hot fudge. But the starters were a hit for folks and worked well in fireplaces, grills, wood stoves, wood ovens, campfires and more.

“It definitely started out more as a hobby and then I realized it was profitable,” he says.

The busines moved quickly from a kitchen assembly line, to the basement and then to the garage before Liszewski rented a 2,200 square-foot commercial warehouse. Today the headquarters is in his hometown Wayland, Massachusetts, and kits are sold across 14 states and Canada. The chemical-free starters can be found in grocery stores like Whole Foods Markets, in garden centers and online.

But he doesn’t plan on making Stokes his life’s work. He hopes to startup another business and continue to be his own boss after graduating. Until then, he’s taking in all that his professors and mentors like Erik Monsen, Grossman's Endowed Chair in Entrepreneurship, have to offer. “Being in school is adding a lot. It’s putting definitions to things I’ve already done and understanding them in a systematic form. I think if I had known what I do now, things would have taken a lot less time with Stokes.”