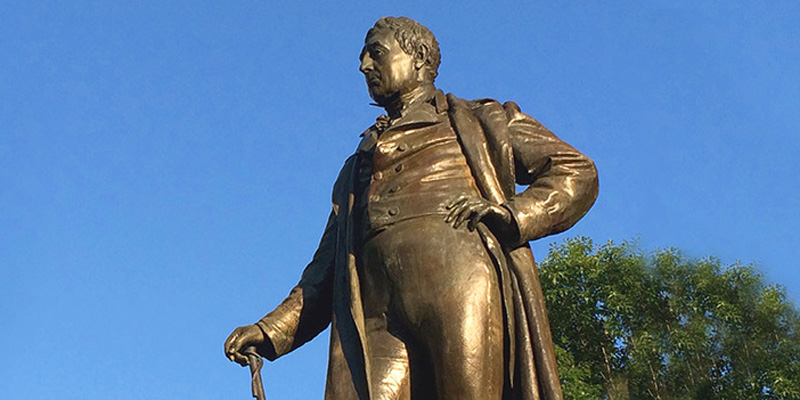 A statue of Lafayette stands on the north end of the UVM Green.

No, we cannot get you tickets to “Hamilton.”

Consolation prize: we can fill you in on the place the Marquis de Lafayette — “America’s favorite fightin’ Frenchman” in Lin-Manuel Miranda’s Broadway blockbuster — holds in the history of the University of Vermont and how his statue came to stand at the north end of the green.

One hundred and ninety-one years ago this week, June 29, 1825, Lafayette visited Burlington on a sort of nationwide victory tour at the invitation of President James Monroe. U.S. history refresher for the non-Hamiltonheads: A French aristocrat and military officer, Lafayette was a hero of the American Revolution, a major-general in the Continental Army under George Washington, a friend and colleague to Alexander Hamilton and other founding fathers. Pop culture crash course for those residing under a rock: Lafayette, played with memorable swagger and a cartoon French accent by Daveed Diggs, is among the reasons “Hamilton” piled up eleven Tony Awards earlier this month.

General Lafayette’s visit to Burlington was a stirring one-day event, writes David Blow, former UVM archivist, in his book Historic Guide to Burlington Neighborhoods, Volume I. A group of Burlington citizens met Lafayette in Montpelier and accompanied him on the ride north in an open carriage pulled by four horses. Headquarters for the visit was Grasse Mount, the handsome mansion at the top of Main Street owned by Cornelius Van Ness, eighth governor of Vermont. (Today, Grasse Mount is home to the UVM Foundation.)

The main event for the day was the ceremonial laying of the cornerstone for the building that would come to be known as Old Mill, replacing the “College Edifice” that had been destroyed by fire a year before. Who better to bless this new era for the university and Burlington than the great man Lafayette? In their recent book Grafting Memory: Essays on War and Commemoration, Professor Emeritus Bill Lipke and William Mares note that the UVM students on-hand for the cornerstone ceremony honored Lafayette by singing “La Marseillaise.”

Blow writes that the Van Ness family, social leaders of nineteenth-century Burlington, threw a party to remember that evening — “The illuminations of the house and grounds, the choice refreshments and the distinguished guest list were subjects of conversation for years afterward.”

While there are some “Lafayette slept here” stories floating about in Burlington history, Blow contends they are false. By eleven o’clock the party was over, and the people of Burlington escorted Lafayette by torchlight down to the waterfront, where he boarded the steamboat Phoenix for Whitehall, New York.

Brief as Lafayette’s visit to Burlington may have been, it would prove lasting. The stone chiseled with his name is still visible along Old Mill’s west face. Commemoration of the visit would come again decades later thanks to John Purple Howard, a major donor to the university, who witnessed the Lafayette visit as a boy growing up in Burlington. When Howard funded the Old Mill’s next life, a major renovation/expansion in the 1880s, a statue of Lafayette by John Quincy Ward was part of the gift. It stood directly in front of Old Mill for years before making a move to the north end of the green in the 1920s, making way for a statue of another hero of the revolution who “history had its eyes on,” UVM founder Ira Allen.