Helping Protect the Future of Facts 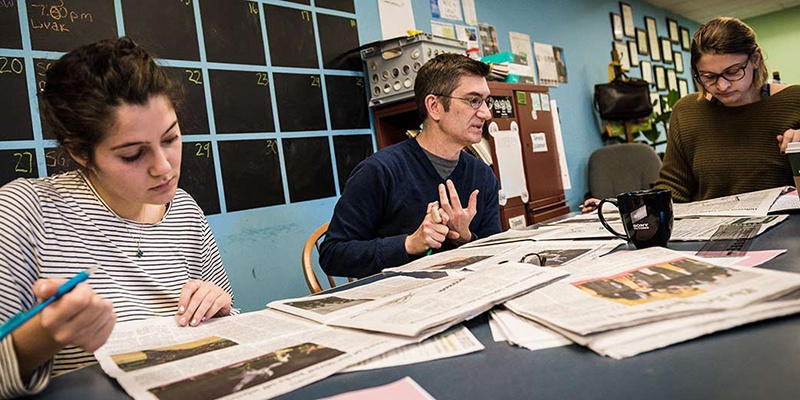 Chris Evans, center, works with Erika Lewy '18 (left) and Olivia Bowman '20. UVM grads, says Evans, "are the minds and the hearts of the organizations that they are working for. That’s what I want for them. I want them to be steering their own path. That’s what a journalist needs to do today." (Photo: Ian Thomas Jansen-Lonnquist)

It’s equal parts critique, lesson and conversation as UVM student media adviser Chris Evans sits down with the Vermont Cynic’s editor-in-chief, Erika Lewy ’18, and managing editor, Olivia Bowman ’20, for their weekly review of the university’s student newspaper. Evans, who also advises WRUV radio and UVMtv, is well-prepared and rapid-fire, a teacher determined to maximize this hour on a quiet Friday morning in the Davis Center.

A chunk of the meeting is devoted to discussing leadership, driven by a reading list ranging from Lao Tzu to Machiavelli to Martin Luther King, Jr. Later, they drill down on a page-by-page look over the Nov. 7, 2017 Cynic, addressing questions as major as the choice of story on 1A and minor as stray commas. Evans offers opinions and advice on the myriad decisions that go into making a publication — why hyphens are forbidden in headlines, when is it editorially responsible to include “four-letter” words in copy, how to get Adobe InDesign to wrap text around that oddly shaped graphic, whether a rock-solid eight-page issue would be a better choice than a rough-around-the-edges twelve-pager, to name a few.

There’s give-and-take. When Evans questions if a suspiciously wooden statement from a student presented as a spoken quote was, perhaps, actually an e-mail, Lewy pushes back, “No, that’s how this kid really talks!” Across the newsroom, another Cynic staffer gives her a second on that. Evans laughs and concedes.

As the editors and staff put together the next week’s issue, they’ll do it with Evans’ lessons and critique of past issues in mind, but with full control over the new editorial content and presentation. “That’s Chris’ thing — support, but from a distance — which is really good,” Bowman says.

Today’s Cynic staffers are the latest in a proud legacy, “Vermont’s independent student voice since 1883.” The paper’s alumni include two-time Pulitzer winner Eric Lipton ’87 of The New York Times; Laura Bernardini ’95, CNN’s director of coverage in Washington, DC; and Robert Rosenthal ’70, longtime editor at top American papers and now executive director of the pioneering Center for Investigative Reporting; among scores of others in journalism and multiple fields.

Evans’ hire in 2006 introduced a new era for UVM student media. The organizations would be guided by a full-time adviser with deep expertise as a communicator. Evans’ work is informed by his own experience as a student journalist at the University of Kansas, five years as a newspaper reporter, Peace Corps service in China, and higher education media advising at Florida’s Valencia Community College. Long involved as a national leader in his field, Evans recently became president of the College Media Association.

The Cynic has earned numerous honors during the past decade, including prestigious Pacemaker Awards from the Associated Collegiate Press and “Diversity Story of the Year” in 2016 for an examination of UVM’s past Kake Walk tradition.

Fierce advocacy for First Amendment rights runs deep, a moral compass guiding Evans’ work. “I spend a lot of time working on leadership skills,” he says. “These are complex organizations, where students need to develop a vision for what they want the organization to be, then they need to figure out how to create that organization and nurture that organization. My students are 100 percent in control of their fate. I am an adviser, which means I give advice. They can follow it or not follow it, it’s up to them.”

At the Cynic, WRUV, UVMtv, and in the courses he teaches for UVM’s public communication major in Community Development and Applied Economics, College of Agriculture and Life Sciences, Evans counsels students interested in journalism/communications careers to be nimble and proactive.

Citing the success of recent alumnae Natalie DiBlasio ’11, director of social media at WIRED, and Aviva Loeb ’15, digital designer for emerging news products at the Washington Post, Evans says, “If there’s an organization that is on the verge of doing the thing that you are very excited about, that’s the time to jump in.”

He continues, “It takes creativity, which I think we’re good for here. We’re not creating a whole bunch of middle managers who are going to go out and sit at a desk and just be the hands of someone else’s mind. I think our students are going out, and they are the minds and the hearts of the organizations that they are working for. That’s what I want for them. I want them to be steering their own path. That’s what a journalist needs to do today.”