Helping Prepare Students for What’s Next 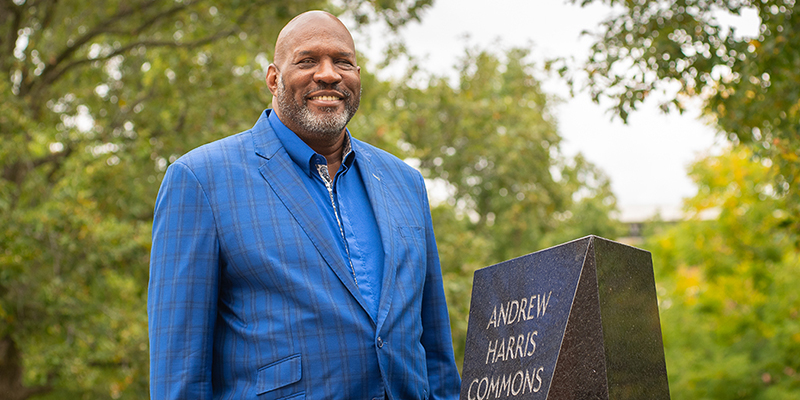 Khalil Munir '74 stands on Andrew Harris Commons, an area of campus dedicated to UVM's first African-American graduate. “This Commons represents an opportunity, a mechanism to pursue consensus building, reconciliation and collaboration. It is also a place where you scholars, you future professionals, will make this a better world,” said Munir at a dedication ceremony in 2018. (Photo: Sally McCay)

In his long career as senior staffer for six different members of Congress and other public service roles in the nation’s capital, Khalil Munir ’74 has had ample opportunity to see the skills that new college graduates bring (or sometimes don’t bring) to a job interview. As a UVM alumnus, he’s leading an effort to help today’s Vermont graduates enter the “real world” well prepared to step into a career.

In particular, Munir, a member of the Alumni Association Board Executive Committee, is helping draw together affinity groups of students and alumni of color, members of the LGBTQ+ community, non-traditional students, and military veterans, among others. A Mosaic Center Community Celebration on campus in March was one part of the effort, creating opportunities for career networking and honing job interview skills. “Those four years of college aren’t a picnic,” Munir says, sounding like both the seasoned professional and father of two that he is. “Students really should be priming themselves for the four years after, developing a vision for what it is they want to do, and creating a plan for how they’re going to get there.”

At his own UVM graduation, forty-five years ago, Khalil Munir would not have envisioned himself as an alumnus deeply involved with his alma mater. (Fellow alumni may remember him as Tyrone Minor; Munir legally changed his birthname in 1978.) He reflects that when he began college at UVM on an athletic scholarship, he was driven by a “basketball-centric” mindset. Vermont was then a member of the Yankee Conference along with UMass, where NBA legend Julius Erving played college ball in the early seventies. “I had visions of becoming the second Dr. J,” Munir says. He played very well his freshman year, but his sophomore season was derailed by a serious knee injury. A new coach would cut Munir from the squad the next fall, saying he lacked mobility. Munir believes the move had more to do with being a strong, rebellious voice on the team; he had initiated a petition that resulted in the previous coach losing his job.

Looking back, Munir says, “My greatest regret in life is that I started that wrong-headed petition. Probably twelve of the fourteen guys on the team signed on to it, but I didn’t have an appreciation of ruining the career and the livelihood of someone who loved the game and had been responsible for giving me a shot to play at UVM. I could have and should have done better.”

But the circumstance, “shattered” by losing his identity as a varsity athlete, pushed Munir to redefine himself and reset his course. He doubled down on his studies in economics, committed to prove to his fellow students and professors that he was more than a basketball player. His career in Washington, D.C., would begin in 1978 when he was selected for the inaugural class of the Presidential Management Fellows Program.

A turning point in Munir’s relationship with his alma mater came five years ago, when he was invited to campus to introduce then president Tom Sullivan at an event. As he became reacquainted with UVM, Munir saw a much more diverse university than the place where he felt cultural isolation as one of very few students of color in the early seventies. But he also saw opportunity to build connection within and among underrepresented populations. “That was the awakening for me,” he says. “Because it forced me to reconcile what I had garnered from being at UVM, what I contributed, and, most importantly, what I can give back.”

Reflecting on his own time at UVM and what he hopes to share with today’s students, Munir says, “Attending a racial majority university prepared me to comfortably and effectively navigate social, professional, and educational situations as a distinct minority—i.e. tall and African American. It’s essential for Mosaic community members to develop positive self-esteem, intellectual competency, job readiness skills, and the confidence to take on the challenges presented to them professionally, culturally, and socially.”