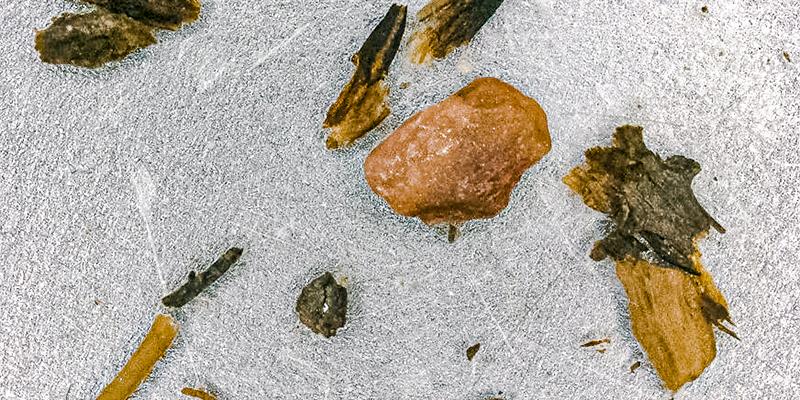 UVM scientist Drew Christ was stunned to find not just rocks—but ancient plants—under his microscope when he was looking at a long-lost sample from the bottom of the Greenland ice sheet.

This surprise discovery started when a Cold-War-era ice core was rediscovered—after decades of being lost in a Danish freezer. This Hollywood-worthy story led Christ, and UVM professor Paul Bierman, to research showing that Greenland is much more sensitive to natural climate warming than previously understood. “And we already know that humanity’s out-of-control warming of the planet hugely exceeds the natural rate,” says Christ, who co-led the study published on March 15 in the Proceedings of the National Academy of Sciences.

And the stunning discovery has led to a stunning array of U.S. and international news reporting—including a story that was highlighted on the front page of the Washington Post and filled page A3 on the print edition.

CNN science reporter Katie Hunt dug into the new findings as well, developing a piece that was on the top of CNN’s U.S. news feed and widely syndicated by many broadcast affiliates.

Science Friday, the widely syndicated program aired by radio stations across the country, invited Drew Christ to be their guest in conversation with host Ira Flatow. The Canadian Broadcasting Corporation produced a probing twelve-minute-long radio conversation with Christ for their flagship science program, Quirks & Quarks.

A host of magazines and science websites covered the study including Popular Science with their story: “How a top-secret nuclear project became a gold mine for data on Greenland’s ice.” Forbes, Atlas Obscura, Cosmos and Inside Climate News developed stories. As did BBC Science Focus, Esquire, with “We've Got New Bad Climate News Courtesy of Cold War Insanity,” and the iconoclast’s favorite: IFL Science.

A story by AFP, Agence France Press, the international news wire, was part of a wave of international coverage. Others included Le Parisien, The Daily Mail, MSN (India), Damals (Germany), The Independent and Nico Nico News in Japan.

An essay on the new climate science was written by Drew Christ and Paul Bierman and published on The Conversation, an international syndication service. It was picked up by hundreds of outlets, including this sampling: Associated Press, Public Radio International, Agenda (World Economic Forum), Houston Chronicle, Yahoo! News, Arctic Today, and the Albany Times Union.