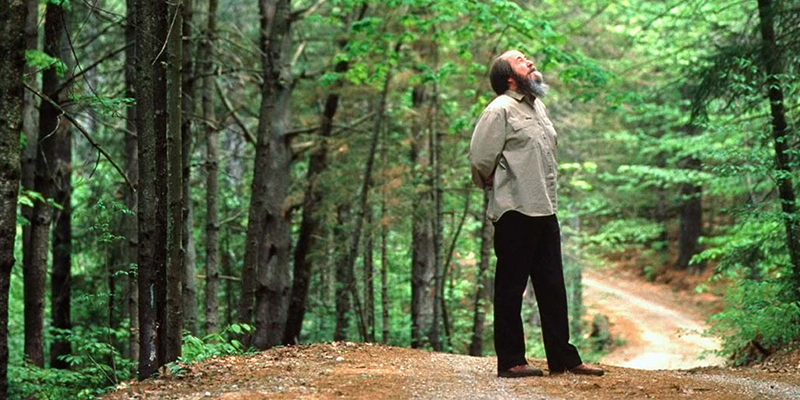 If you know Professor Kevin McKenna, you know that he gave it his best effort, ardent and true. 1989, McKenna spearheaded a UVM-hosted national conference on Aleksandr Solzhenitsyn’s work. With the Nobel laureate author living just a two-hour drive away in Cavendish, Vermont, the professor of Russian extended an invitation to speak at Ira Allen Chapel.

McKenna knew the odds were long. A curt letter from Solzhenitsyn’s personal secretary sealed it: “Aleksandr Isaaevich no longer gives lectures on American college campuses. Yours will not be an exception.”

Recounting the story nearly thirty years later, McKenna says, “I wasn’t at all surprised.” Widespread misunderstanding of comments the author made at a 1978 commencement address at Harvard had soured him on such campus appearances.

As December 18, 2018, marks the centennial of Solzhenitsyn’s birth, his life and legacy are reflected upon from Moscow to Cavendish. This summer, McKenna re-read his well-worn copy of One Day in the Life of Ivan Denisovich for, perhaps, the thirtieth time, preparing to teach a fall semester world literature class focused exclusively on Solzhenitsyn.

Centennial events have also taken McKenna, and colleague Professor Wolfgang Mieder, to Russia to deliver lectures to the Russian Academy of Sciences and research future work. In Vermont, McKenna helped to organize an exhibit at the Vermont Historical Society and participated in a conference at Northern Vermont University on the topic of Solzhenitsyn’s fiction. He also recently received an invitation from the Academy of Science and Solzhenitsyn Archives in Moscow to deliver a lecture at their international conference in December celebrating the centennial of the author’s birth.

Living in exile in Switzerland in the mid-1970s, Solzhenitsyn found it too busy, too paparazzi-accessible. Friends in Ontario told him about this place to the south. McKenna lists the aspects of Vermont that appealed to the writer—climate and landscape that felt like home; isolation but not too far from the libraries and archives at Harvard and Dartmouth; a solid place to raise his and his wife’s three children; and, most importantly, neighbors who would respect, even protect, his privacy.

With his bearded and brooding looks, a writer at work in the woods, it’s tempting to label Solzhenitsyn a hermit during his Vermont years, 1976 to 1993. McKenna says no. “He was an unbelievably dedicated writer and researcher, regularly working eighteen hours a day,” McKenna says. “Yes, he wasn’t the kind of person who would attend numerous barbecues, go bowling and things like that, not an overly social kind of person, but definitely not a hermit. He was an avid tennis-player, for example.”

Solzhenitsyn and his wife, Natalia, did attend Town Meeting in Cavendish in 1993 to thank the town and friends there for the welcoming safe harbor of their Vermont years. A sign in the Cavendish general store had long read, “No directions to Solzhenitsyn’s home.”

As McKenna guides students through Solzhenitsyn’s oeuvre this semester, he reflects on what we can learn about twenty-first century Russia from this giant of twentieth-century literature. From outside the country’s borders, McKenna says there is an abiding message to be wary of the Kremlin. Within Russia, Solzhenitsyn’s once-banned books are now seen as mandatory reading by Vladimir Putin’s government. McKenna says, “In the same way as Dostoyevsky or Tolstoy, he is viewed as a Russian prophet, a writer who has something essential to say to and about the Russian people.”