Got Bees? Got Vitamin A? Got Malaria? 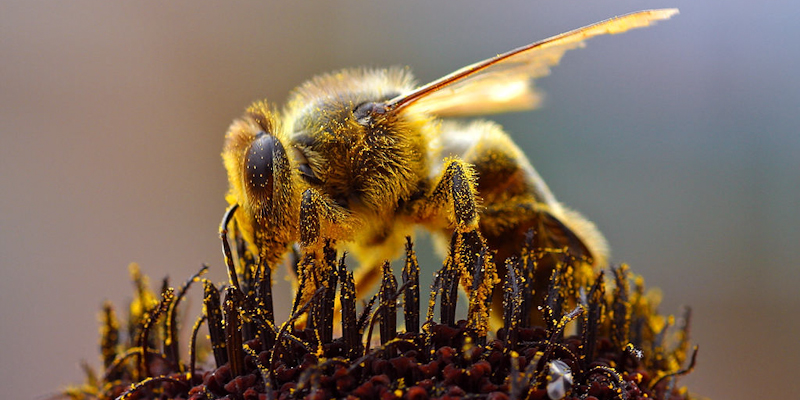 Bees allow farms to thrive. But new research from UVM and Harvard scientists shows how bees and other pollinators may be crucial to human health too. The study in PLOS ONE presents the first-ever empirical test of how declining pollinators may increase risk of nutrient deficiencies — with worrisome connections to diseases like measles and malaria, so prevalent in the developing world. (Photo: Jon Sullivan)

A new study shows that more than half the people in some developing countries could become newly at risk for malnutrition if crop-pollinating animals — like bees — continue to decline.

Despite popular reports that pollinators are crucial for human nutritional health, no scientific studies have actually tested this claim — until now. The new research by scientists at the University of Vermont and Harvard University has, for the first time, connected what people actually eat in four developing countries to the pollination requirements of the crops that provide their food and nutrients.

“The take-home is: pollinator declines can really matter to human health, with quite scary numbers for vitamin A deficiencies, for example,” says UVM scientist Taylor Ricketts who co-led the new study, “which can lead to blindness and increase death rates for some diseases, including malaria.”

It’s not just plummeting populations of bees. Scientists around the world have observed a worrisome decline of many pollinator species, threatening the world’s food supply. Recent studies have shown that these pollinators are responsible for up to forty percent of the world’s supply of nutrients.

The new research takes the next step. It shows that in some populations — like parts of Mozambique that the team studied, where many children and mothers are barely able to meet their needs for micronutrients, especially vitamin A — the disappearance of pollinators could push as many as 56 percent of people over the edge into malnutrition.

The study, “Do Pollinators Contribute to Nutritional Health?” was led by Alicia Ellis and Taylor Ricketts at UVM’s Gund Institute for Ecological Economics and Samuel Myers at the Harvard School of Public Health. It appears in the Jan. 9 issue of the journal PLOS ONE.

The “hidden hunger” associated with vitamin and mineral deficiencies is estimated to harm more than 1 in 4 people around the globe, the scientists note, contributing to increased risk of many diseases, reduced IQ and diminished work productivity. “Continued declines of pollinator populations could have drastic consequences for global public health,” the team writes.

“This is the first study that quantifies the potential human health impacts of animal pollinator declines,” says Myers. Earlier studies have shown links between pollinators and crop yields — and between crop yields and the availability of food and nutrients. “But to evaluate whether pollinator declines will really affect human nutrition, you need to know what people are eating,” Myers explains. So the new study examined the full pathway from pollinators through to detailed survey data about people’s daily diets in parts of Zambia, Mozambique, Uganda and Bangladesh.

“How much mango? How much fish?” says Ricketts. “And from that kind of data we can find out if they get enough vitamin A, calcium, folate, iron and zinc.” Then the scientists were able to examine the likely impact a future without pollinators would have on these diets.

And for parts of the developing world, that future could well include “an increase in neural tube defects from folate deficiency or an increase in blindness and infectious diseases from vitamin A deficiency,” Myers says, “because we have transformed our landscapes in ways that don't support animal pollinators anymore.”

“We find really alarming effects in some countries for some nutrients and little to no effect elsewhere,” Ricketts says. On the bleak end of the spectrum, the team projected little difference in Bangladesh, since so many people there are already malnourished. And, at the other end of the spectrum, Zambia should be relatively insulated from this risk. That’s because — though the scientists project reductions in the intake of vitamin A with pollinator declines in Zambia — “there is so much vitamin A in the diet already that it didn't push very many people below the threshold,” Myers explains.

This new study fits into an emerging field of research exploring how the very rapid transformation of Earth's natural systems affects human health. The big picture? “Ecosystem damage can damage human health,” Ricketts says, “so conservation can be thought of as an investment in public health."

A new UVM study traces the path from pollinators to crop yields to people's daily diets to risk of nutrient deficiency. (PLOS ONE)