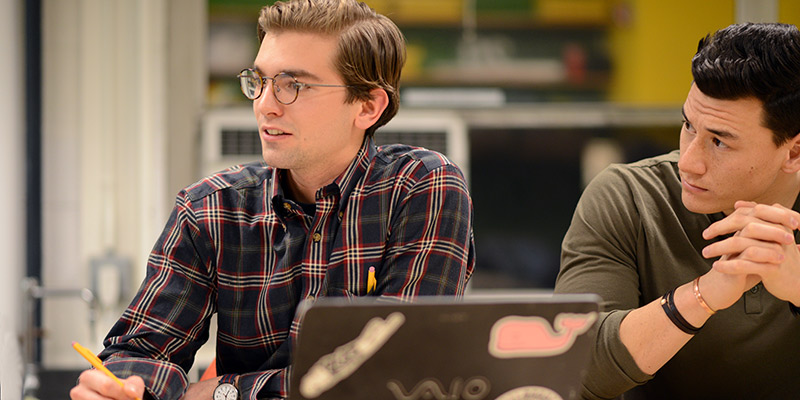 Senior Andrew Dazzo plans for the launch of the Catamount Innovation Fund with other members of the Student Analyst Team, including Larner College of Medicine student Zach Ehret (right) in Hills 20, a new campus space where students can work on product ideas for startups. (Photo: Tomoki Nomura)

In a city and state known for its innovative spirit, it’s no surprise that student entrepreneurs at UVM are trying to get in on the action. To help these students bring their ideas to market, senior Andrew Dazzo has developed a new innovation fund, which offers funding and expertise.

Dazzo, an economics major minoring in business, was appointed by Student Government Association President Jason Maulucci to lead the Catamount Innovation Fund (CIF) steering committee with a handful of other SGA leaders including Jake Guarino, Andrew Percoco and Ellie Fortner-Buczala. The fund, financed by alumni donations and the SGA, is housed in the Office of the Vice President for Research.

The first student venture is expected to be funded this year. Dazzo anticipates proposals from a broad range of disciplines, including the engineering department's SEED program, healthcare-themed startups from medical students with guidance from medical student Al Marchese., and environmental innovations from students in the Rubenstein School of Environment and Natural Resources.

“We want to be the entity that helps students flesh out their ideas, figure out their market, distill their pitches, and whatever else they need to turn their idea into a successful business," says Dazzo, who landed a job as an analyst at Wells Fargo after graduation. "We looked at models at other universities that choose to take equity stakes in startup companies and we think our model, which relies on a grant structure and does not to take equity, will be very effective."

Here’s how it works: a student brings an idea to the Student Analyst Team, run by Dazzo and other students. If it shows promise, the team would provide support and potentially a $2,000 grant to create a prototype through a number of local facilities, including UVM's Instrumentation & Modeling Facility, the Fab Lab, or off campus at Generator. Students also have access to a workspace in Room 20 of the Hills Agricultural Science Building, a new space created to support students, faculty and staff interested in innovation, design thinking, and entrepreneurship.

Students who go through the prototype process may then win a $10,000 grant to further develop, market, and potentially launch a startup. Student entrepreneurs with existing startups are also eligible for CIF support. Dazzo and other CIF creators are currently in the process of recruiting 16 students (students may apply via this form) to round out the Student Analyst Team. Student analysts will receive training from faculty including Erik Monsen, the Steven Grossman Endowed Chair in Entrepreneurship, and alumni. Guidance from a Board of Advisors, comprising alumni in business and other relevant fields, will also be available to students and analysts to provide expertise and support.

Well aware that the Catamount Innovation Fund doesn’t exist without alumni support, Dazzo has been developing an extensive database of potential donors. He started honing his networking skills two summers ago by calling at least one UVM alum every day at 4:30 p.m. from his car in a parking lot after working as an intern at an aerospace engineering company on Long Island.

“I gradually went through all of UVM’s investment banking alumni that I could find on LinkedIn (about 50),” says Dazzo, adding that the calls indirectly resulted in an internship the following summer at Wells Fargo. “I think it was important that I did not call to ask about internships, but rather to learn about their career paths, time at UVM, and their current role at their respective banks.”

Dazzo started his internship at Wells Fargo in the summer of 2016 with 200 other college students, hoping to impress enough to be among the coveted few to land a full-time job at the prestigious bank. It included 100-hour work weeks analyzing market news, updating models, creating PowerPoint presentations, and editing senior bankers’ comments, and a final project that Dazzo says played a key role in his being offered a position following graduation.

“You arrived on time, did your job sometimes from 9 a.m. to midnight, and accepted any and all work that was thrown your way," he says. "You felt the pressure from day one, but it was well worth the experience."

When Dazzo, who is also an SGA representative, returned to UVM, he wanted to learn more about alumni fundraising, so he volunteered as an intern with the vice president of finance at the UVM Foundation. He also interned at VENTURE.co, a financial technology business on Church Street that helps small startups raise debt and equity online through a funding portal.

“If we’re going to be providing strategic and operational guidance for startups we want to have some sort of background, so we’re planning a training session led by start-up leaders in the Burlington community and faculty," Dazzo says. "At the end of the day we realize we’re just students, so we want to rely on the expertise of local entrepreneurs, faculty and the alumni connections we’re continuing to build.”

Jon Reidel
"We want to be the entity that helps students flesh out their ideas, figure out their market, distill their pitches, and whatever else they need to turn their idea into a successful business," says Dazzo.