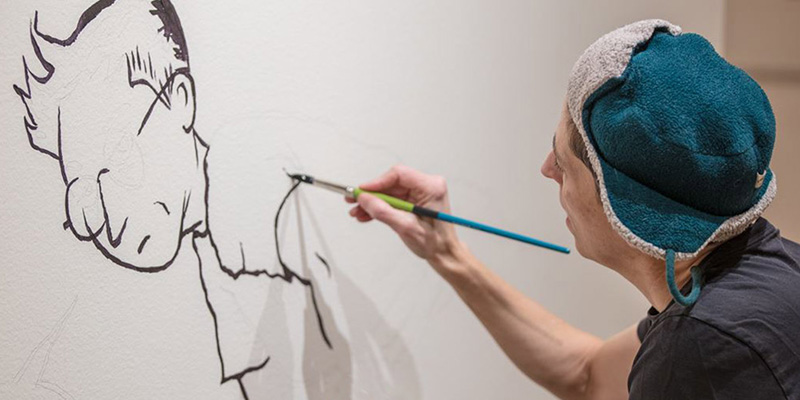 Wednesday, Feb. 21, is the first of several talks and other events related to “Self-Confessed.” Alison Bechdel will deliver an artist’s talk at 7 p.m. in the Silver Maple Ballroom, Davis Center. (Photo: Chris Dissinger)

Enter the Fleming Museum gallery for “Self-Confessed: The Inappropriately Intimate Comics of Alison Bechdel,” and the first work you encounter is a self-portrait of the artist as sifter of cat litter. The cat looks intently upon the business at hand; the artist looks out at the viewer; the dialogue bubble offers a flat “What.”

Honest, unpretentious, and, of course, funny, welcome to the world of Alison Bechdel, an artistry built upon “the minute observation and recording of her own life,” as the exhibition’s curators note.

Introductions may not be necessary, particularly in the artist’s adopted home state, where she is the current Vermont Cartoonist Laureate, not to mention folk hero. But if you need an Alison Bechdel primer, here goes. She built her career upon “Dykes to Watch Out For,” a comic strip that ran from 1983 to 2008. Her graphic memoir “Fun Home: A Family Tragicomic” vaulted her to another level with a New York Times bestseller that served as the basis for a Tony-award winning musical. The recipient of a MacArthur Foundation “genius” grant, Bechdel teaches at UVM through the Marsh-Professor-at-Large program.

Fleming curator Andrea Rosen and Margaret Tamulonis, collection and exhibition coordinator, worked with Bechdel on selecting works for the show, which is on display through the end of the semester. Bechdel’s Marsh Professorship provided the initial spark that got Fleming director Janie Cohen talking to the artist about a possible show. Last fall’s Pulp Culture Comic Arts Festival & Symposium included Bechdel as one of the three keynote speakers, making for a rich year celebrating the genre at UVM.

Tamulonis and Rosen assembled on the show with an awareness that comic strips and graphic memoirs on the wall had the potential for a text-heavy experience and built-in variety. They were fortunate to have an artist, in Bechdel, who was both generous with her time and willing to let them dig into a deep, intimate archive dating back to her childhood. Touring the exhibition, Rosen points out a case with very early work from Bechdel’s childhood and teenage years. There’s a small book with a cover of faded, water-stained construction paper. The title is handwritten in bubbly, Robert Crumb-like lettering: “AN ODD, STRANGE AND CURIOUS COLLECTION OF ALISON BECHDEL’S WORKS.” Rosen notes that the Bechdel voice we know now was already emerging then.

“Self-Confessed” arranges Bechdel’s work in several distinct spaces—“Dykes”; “Fun Home,” the graphic memoir; her 2012 book “Are You My Mother? A Comic Drama”; and “Fun Home,” the Broadway musical. The latter includes a small treasure, the original set design for “Fun Home,” reconstructed for the Fleming exhibition by theatrical designer David Zinn. Midway through, a couple of chairs, a couch, and a coffee table stacked with copies of Bechdel’s books offers a chance to sit down and read the work in its original format, between two covers.

Not long before the show opened in late January, Rosen and Tamulonis walked through the galleries with Bechdel. The artist felt like it still needed something, a shift in scale and perspective. Days later, she returned with a brush and black paint and set to work on several wall paintings — the original “Dyke to Watch Out For,” angry, naked, coffee-pot-in-hand; Bechdel’s “Dykes” alter-ego Mo looking stressed; an “uncowed cow” for Vermont Pride Day; and that opening/closing painting, in which Alison Bechdel, cleaner of cat litter, has the first and last word. What.

Wednesday, Feb. 21, is the first of several talks and other events related to “Self-Confessed.” Alison Bechdel will deliver an artist’s talk at 7 p.m. in the Silver Maple Ballroom, Davis Center. On March 28, Valerie Rohy, UVM professor of English, will deliver a talk, “Alison Bechdel’s Vermont: A Queer Regionalism,” at noon, Fleming Museum. On April 4, Bechdel will join with past Vermont Cartoonist Laureates James Kochalka and Edward Koren for a panel discussion, at 6 p.m., Fleming Museum.