Astronaut Shares Her Insights on Where a Ph.D. Can Lead 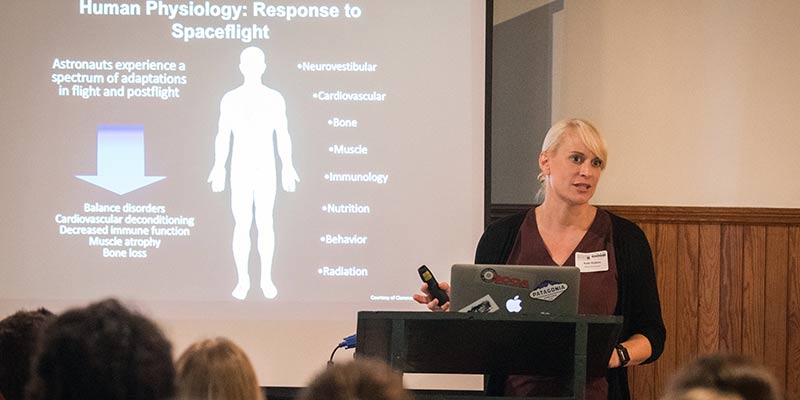 Talk about the challenges of scientific study: Kate Rubins had to conduct her biomedical and gene-sequencing experiments without many of the basic laboratory necessities – including gravity.

She’s a NASA astronaut who flew on Expedition 48/49 to the International Space Station in 2016, spending 115 days there with five other crew members.  Rubins became the first person to sequence DNA in space and helped conduct hundreds of other biological studies, collecting reams of data.

Last week, she came to a somewhat less remote location at the Grand Isle Lake House on Lake Champlain in Grand Isle, Vt., for the annual retreat of University of Vermont doctoral students in the Neuroscience Graduate Program and the Cellular, Molecular and Biomedical Sciences program. A group of students from both programs invited Rubins to talk about her scientific experiences in space and the transfer of her skills in microbiology and virology to an unusual field of work.

With her science pedigree and atypical job, Rubins shows the Ph.D. candidates “the breadth of areas you could go with your science,” said Cynthia Forehand, dean of the UVM Graduate College, after Rubins’ talk.

“We’re encouraged to explore alternative options beyond academia,” said Emily Whitaker, a third-year CMB student who helped arrange Rubins’ visit. “Hearing people like Kate come speak to us, it just opens a whole field of opportunities for where we can go.”

An academic career remains the goal for many graduate students, but the number of funded faculty positions is shrinking, along with federal research budgets, said Neuroscience Graduate Program director Anthony Morielli, a professor of pharmacology at UVM. Meanwhile, he said, more jobs are available for scientists in the biochemical and pharmaceutical industries, as well as government agencies like the Food & Drug Administration.

In the Cellular, Molecular and Biomedical Sciences program, the Career Mobility Builder was designed to introduce graduate and post-doctoral students to alternative career paths through a series of speakers and workshops, including sessions on starting a business or interviewing for a private-sector job. “There’s so many opportunities outside of having your own bench, doing your own research, working in your own lab,” said Trevor Wolf, a second-year CMB student who helps coordinate the Builder.

Rubins’ job is “something different, out-of-the-box, that you might not have thought of,” he said.

Rubins, who got her Ph.D. at Stanford University in 2005, said she always wanted to be an astronaut but started out with more earthbound work in public health, specifically the study of HIV infection. One day on a whim, she filled out the NASA application online and was accepted in 2009. The agency sought her ability to pick up new skills in training, she said, even more than her scientific background.

“They don’t really hire you for your expertise,” Rubins said.

Training for spaceflight started two and a half years before launch. First, Rubins learned to fly Navy airplanes, she said. Many astronauts come from the U.S. military, particularly as pilots; the rest are scientists and engineers. On the space station, all had to share the work and learn from one another’s skills.

“I’ve taught pilots how to remove brains from mice, and they get pretty good at it,” Rubins said.

They also took on practical tasks like assembling a life support system, fixing toilets and even doing dental work like pulling out a molar.

Rubins took her first spacewalk to help install a docking system outside the International Space Station. That morning, the team spent six hours in their spacesuits to depressurize.

“There’s no way to really train or prepare for this,” she said. “I will tell you, it’s completely terrifying.”

As for working in outer space, she said, “If you want to replicate this at home, you can put on some oven mitts and roller skates and then try to cook dinner.”

On the space station, Rubins lacked several pieces of equipment, including a centrifuge. In her slideshow presentation, she held a makeshift version she constructed using a hand drill. For her rudimentary research bench, she stacked up packing materials and used Velcro to keep them in place.

Astronauts send themselves care packages in cargo spacecraft that arrives later at the space station, usually treats like cookies or photos of their children. Rubins shipped an array of pipettes to herself. Then, she had to figure out how to keep fluids inside the test tubes without gravity.

“You can do any experiment on the ceiling,” she said, adding with tongue in cheek, “It makes it so much better.”

In many ways, Rubins said, the restrictions of space were similar to the limited resources she had in Congo, where she oversaw lab teams studying viral diseases. They grappled with poor or nonexistent filtration and sanitation systems and installed solar arrays to supply missing power.

Back in space, the possibilities are vast, Rubins said. She hopes to explore more biological effects of zero gravity on future trips, including eventual missions to Mars.

Despite the many gee-whiz aspects of her work, the UVM grad students focused on the science with their questions after Rubins’ talk. They asked about the ability of microbes to live on a spacesuit, gravity’s effect on organs at the cellular level and the body’s immune response in space to certain viruses.

One student wondered how the astronauts handle fecal waste – a query Rubins also gets from 5-year-olds, she laughed. The answer: It’s a closed-loop, complicated purification system in which almost all waste gets recycled.

Space travel isn’t for everyone, Rubins acknowledged after her talk, but scientists can take their Ph.D.’s into nearly any field.

“It’s good for students to be exposed to a range of options,” she said, “and then decide what’s a good fit, where are they going to be happy.”