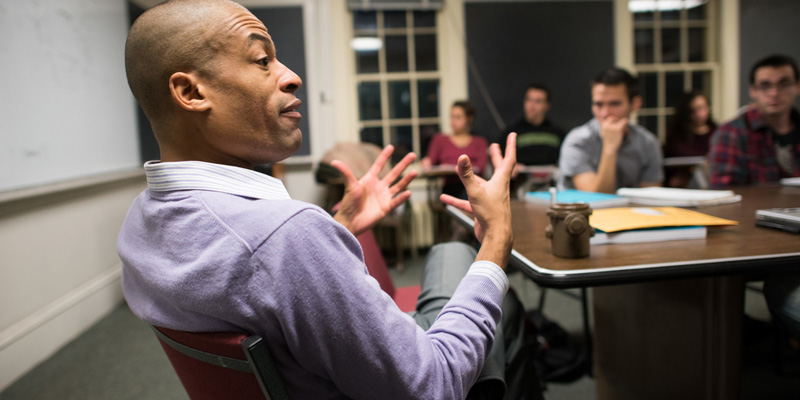 Imagine that you’ve lost your hard drive. Argh. There goes your term paper or perhaps those beach photos. Now jump forward into a foreseeable future and imagine that you’ve lost a hard drive — that’s wired into your brain and links out to the Cloud. There goes…what? Your memories? Your transhuman app for doing calculus equations in your head? The behavior modification software that controls your heroin addiction?

“If I am really tied in to my iPhone — in the sense that it has taken over some of my cognitive functioning—should it get a protective status now?” wonders UVM philosopher Randall Harp. “Should technologies have a moral and ethical status as part of me?”

As a teacher, Harp wants his students to think deeply about questions like this — about what, exactly, does “me” mean? And as a researcher, Harp has thought deeply about how that me — that self or “agent” as the philosopher-speak puts it — can be understood to have chosen to act.

Harp tips back in his chair and directs his eyes toward the ceiling when he is thinking. Musing out loud, he quotes famed philosopher Ludwig Wittgenstein from memory: “What is left over if I subtract the fact that my arm goes up from the fact that I raise my arm?”

Far from daydreaming, Harp’s field of action theory has pressing relevance for guiding new developments in behavioral science, neurobiology and law. “If you hit somebody while having a seizure, generally we say, ‘Oh that’s unfortunate, but that’s not your fault,’” Harp says, but figuring out “what the boundaries of agency are is very important,” he says. “A growing strategy in law — neuro-law — is to reduce all of the things we do, to some extent, to something like seizures.” Not guilty, your honor, my brain did it.

But if it wasn’t your brain, then what was it? In now-famous studies, volunteers connected to an EEG are asked to move their finger — and behold, a characteristic pattern of brain activity associated with the action is detected before the volunteers describe being aware of their intention to move their finger. Some people have interpreted this to mean that our perception of free will is an illusion.

“These studies show something interesting,” Harp says, “but they're not at all showing what many scientists think they're showing — because many of these scientists have no idea what free will means!” If by free will they mean, “something in you which is not itself caused by anything — or some system in your brain which is capable of causing you to act and is simultaneously aware of itself acting…” Harp says, trailing off and shaking his head. “Then they have a terrible idea of free will that was discredited 600 years ago.”

Which is why Harp sees how he and other philosophers play a role in “observing the observers,” he says, and also as partners in developing more profound psychological and behavioral sciences. Take the heroin user. “What does it mean to call them an addict?” Harp asks, “Some behavioral economists might say there is no such thing as addiction. If they’re placed in a situation where this drug becomes much more expensive than that drug, they'll make a choice to use something else.” Whereas some neurologists may say, “of course there is addiction,” Harp says, and point to evidence of brain disease.

“One of the things that philosophers can do is to say: here are eight different views about how addiction might work,” Harp says, “and here are ways to think about what we mean by volitional control, free will and intention.”

“Is it taking away free choice if you know how someone is going to choose based on the way their brain works?” Randall Harp wonders. “These are the kinds of questions that we are going to need to face up to, the more advanced our behavioral sciences get. Asking them is my job.”

This story is part of a recent university publication that investigates the breadth and depth of humanities scholarship at UVM. Read more.