A Conversation with Ta-Nehisi Coates 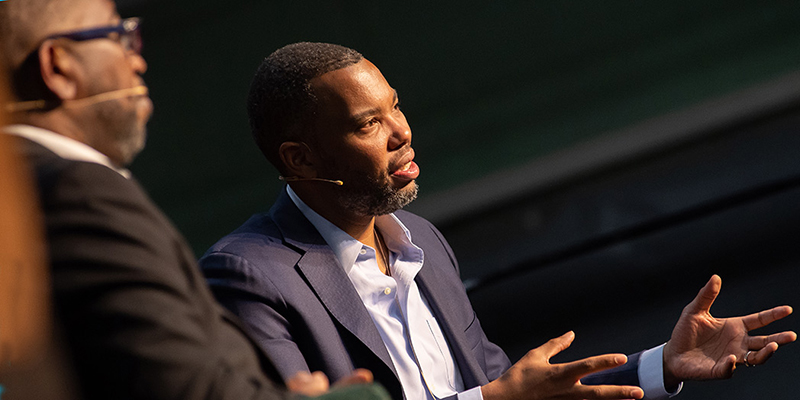 Thousands gathered to hear a conversation between poet Major Jackson and celebrated author Ta-Nehisi Coates on election night, Nov. 6. "Voting is not the end of your political engagement," said Coates. “We need to do all of that other work, so that when we fill out the ballot we aren’t just trying to forestall evil.” (Photo: Sally McCay)

When UVM’s Class of 2022 attended orientation sessions last summer, they enrolled in courses, got to know the campus, the city and one another. They were also handed a book — “Between the World and Me” by Ta-Nehisi Coates — and an assignment: read it before returning to town in late August ready to begin college in earnest. UVM’s First Year Reading Program unites incoming classes in a common experience, and, at its best, sends a clear intellectual message that they are not in high school anymore.

Lisa Schnell, Honors College interim dean and associate professor of English, teaches a section of the college’s first-year seminar, “The Pursuit of Knowledge.” The course is among many at UVM that incorporate the first-year reading selection into the syllabus. Schnell admits to some initial concern at the proposal of that particular title, a deeply personal, unflinching perspective on racism in the United States and winner of the 2015 National Book Award.

“I honestly thought it was a little dicey. It is just a challenging book that requires conversation, engagement and well-facilitated discussions.” Working with the Center for Teaching and Learning and the Center for Cultural Pluralism, faculty prepared over the summer to teach the book as effectively as possible. And the new students, as well, have proven up to the challenge, Schnell says. “It has been an incredible experience. Students are excited, none of the ‘why do we have to read this?’ chorus you sometimes get with other books. We started with it the first day of class, a powerful example of what college education is right at the beginning. It surprised them, and they had to go beyond.” Ten weeks and several books down the road, Schnell says her students still bring it up in class.

Deborah Noel, senior lecturer in English, is teaching Coates’ book in both an Honors College first-year seminar and a Teacher Advisor Program short story course. For each class, she notes, “Between the World and Me” serves as a powerful example of counter-narrative. “We have a familiar, even ubiquitous, idealized story of American identity enshrined in founding documents, made popular in the media, in textbooks, in popular discourse in general,” she says. “But this idealized view describes a narrow sampling of American life, and its very idealism is predicated on the suppression of terrible realities.”

Noel says that her students appreciate the “brutal honesty” of Coates’s book. “The book makes most of them uncomfortable, but some aspects of American life right now are very uncomfortable, and they feel that, too. So it resonates with that nagging feeling that we have huge challenges in front of us that we need to talk about directly.”

Or, as Noel’s teaching colleague Lisa Schnell puts it, there is “a necessariness” to reading this book at this moment. And she adds that sitting in the same room with the author takes the experience of reading his work a step deeper. “His ideas are so powerful. But to have Ta-Nehisi Coates there in the flesh, sitting on the stage talking, that also has its own power,” she says.

A Conversation with Ta-Nehisi Coates

Students, and the wider university and local communities, had that opportunity on Tuesday, November 6, weathering a damp Election Day evening and a long line spiraling outside of the athletic complex to hear Coates in conversation with UVM professor and poet Major Jackson.

Addressing a full house, the author opened with a short reading from “Between the World and Me,” prefacing it with the comment that his book is, above all, about fear — in particular, the degree to which fear in African-American communities is at the root of the Black Lives Matter movement.

Then Jackson joined the author on stage, sitting side by side in arm chairs as Jackson guided a discussion through topics that included Coates’ early efforts as a poet, his formative years at Howard University, current teaching in the journalism program at New York University, influences from James Baldwin to Marvin Gaye and the persistent desire many express that his writing might offer some vision of hope around racism in America.

Speaking to what he hopes to impart to his students at NYU, Coates said, “I want them to learn to respect the beauty of language.” Though he was self-deprecating about the poetry he wrote early in his career, Coates noted that “one of the great lessons as a poet was to pay attention to every single word.” His ultimate goal as an author is not that readers merely walk away with a story that is factually correct. “I want them to be haunted. I want the words that I’ve chosen and the ways that I’ve organized them to haunt readers long after they’ve stopped reading.”

Late in the conversation, before turning to several student questions, Jackson posed a question that went to the heart of Coates’s book, what it is and what it is not. “Why does the country need to hear optimism out of the mouths of black people?” Jackson asked. 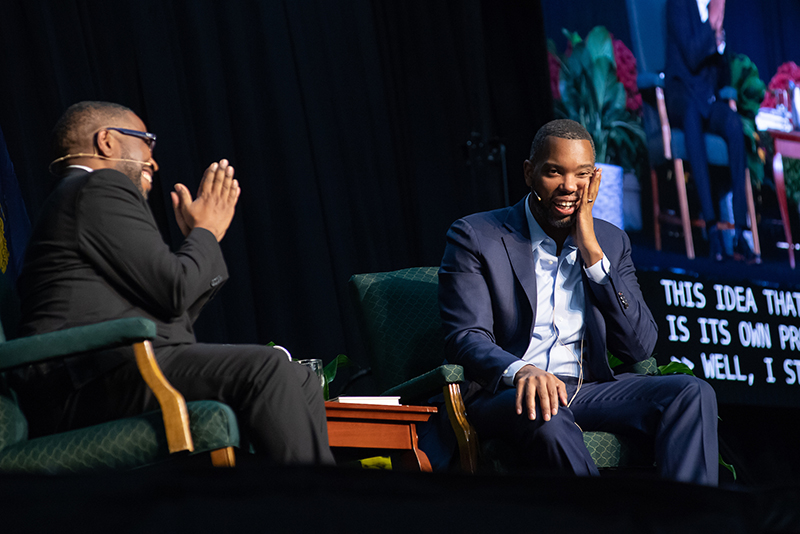 Noting that because he wasn’t raised in the Christian tradition of Martin Luther King, Jr. or James Baldwin, Coates said he is not inclined to preach the power of love. “Most things don’t end up well,” he said. “The moment in which there is black progress is when a critical mass of white people has decided it is in their interest.” Coates walked through some American history: Lincoln was assassinated by a racist; King was wire-tapped and harassed by the FBI, then assassinated as well; the light of Barack Obama’s presidency was followed by the retrenchment of Donald Trump’s. “As a writer, I want to be respectful to all of you,” Coates said. “It would be wrong of me to read a bedtime story to you. It would be deeply disrespectful.”

Before the audience headed home for an evening of nervously watching election returns, one student asked Coates to reflect on the significance of voting in the day’s midterm elections. The author admitted, with some embarrassment, that his first vote was cast at age 33, in 2008 for Barack Obama. A sense that the whole system was corrupt and voting was participation in that corruption kept him away from the polls, Coates said — “That was a radical, but limited view.” He said his perspective shifted when a friend suggested that even though a vote might be for “a lesser evil. I’m for less evil.”

Likening voting to taking out the trash — a chore and a duty, the neglect of which has tangible consequences — Coates added, “But voting is not the end of your political engagement. We need to do all of that other work, so that when we fill out the ballot we aren’t just trying to forestall evil.”