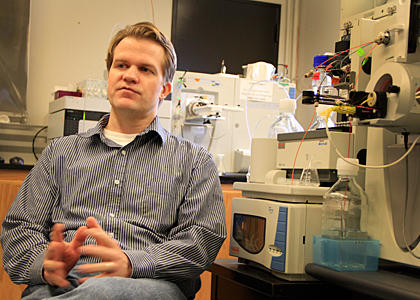 Yet this knowledge could be “a matter of life and death,” says University of Vermont biologist Bryan Ballif.

But the molecular basis of these two blood types has remained a mystery — until now.

In the February issue of Nature Genetics, Ballif and his colleagues report on their discovery of two proteins on red blood cells responsible for these lesser-known blood types.

“Only 30 proteins have previously been identified as responsible for a basic blood type,” Ballif notes, “but the count now reaches 32.”

The last new blood group proteins to be discovered were nearly a decade ago, Ballif says, “so it’s pretty remarkable to have two identified this year."

Both of the newly identified proteins are also associated with anticancer drug resistance, so the findings may also have implications for improved treatment of breast and other cancers.

As part of the international effort, Ballif, assistant professor in the biology department, used a mass spectrometer at UVM funded by the Vermont Genetics Network. With this machine, he analyzed proteins purified by his longtime collaborator, Lionel Arnaud at the French National Institute for Blood Transfusion in Paris, France.

After the protein identification in Vermont, the work returned to France. There Arnaud and his team conducted cellular and genetic tests confirming that these proteins were responsible for the Langereis and Junior blood types. “He was able to test the gene sequence,” Ballif says, “and, sure enough, we found mutations in this particular gene for all the people in our sample who have these problems."

Beyond the ABO blood type and the Rhesus (Rh) blood type, the International Blood Transfusion Society recognizes twenty-eight additional blood types with names like Duffy, Kidd, Diego and Lutheran. But Langereis and Junior have not been on this list. Although the antigens for the Junior and Langereis (or Lan) blood types were identified decades ago in pregnant women having difficulties carrying babies with incompatible blood types, the genetic basis of these antigens has been unknown until now.

Therefore, “very few people learn if they are Langereis or Junior positive or negative,” Ballif says.

“Transfusion support of individuals with an anti-Lan antibody is highly challenging,” the research team wrote in Nature Genetics, “partly because of the scarcity of compatible blood donors but mainly because of the lack of reliable reagents for blood screening.” And Junior-negative blood donors are extremely rare too. That may soon change.

With the findings from this new research, health care professionals will now be able to more rapidly and confidently screen for these novel blood group proteins, Ballif wrote in a recent news article. "This will leave them better prepared to have blood ready when blood transfusions or other tissue donations are required," he notes.

“Now that we know these proteins, it will become a routine test,” he says.

This science may be especially important to organ transplant patients. “As we get better and better at transplants, we do everything we can to make a good match,” Ballif says. But sometimes a tissue or organ transplant, that looked like a good match, doesn’t work — and the donated tissue is rejected, which can lead to many problems or death.

“We don’t always know why there is rejection,” Ballif says, “but it may have to do with these proteins.”

The rejection of donated tissue or blood is caused by the way the immune system distinguishes self from not-self. “If our own blood cells don’t have these proteins, they’re not familiar to our immune system,” Ballif says, so the new blood doesn’t “look like self” to the complex cellular defenses of the immune system. “They’ll develop antibodies against it,” Ballif says, and try to kill off the perceived invaders. In short, the body starts to attack itself.

“Then you may be out of luck,” says Ballif, who notes that in addition to certain Japanese populations, European Gypsies are also at higher risk for not carrying the Langereis and Junior blood type proteins.

“There are people in the United States who have these challenges too,” he says, “but it’s more rare.”

Ballif and his international colleagues are not done with their search. “We’re following up on more unknown blood types,” he says. “There are probably on the order of 10 to 15 more of these unknown blood type systems — where we know there is a problem but we don’t know what the protein is that is causing the problem.”

Although these other blood systems are very rare, “if you’re that one individual, and you need a transfusion," Ballif says, "there’s nothing more important for you to know.”