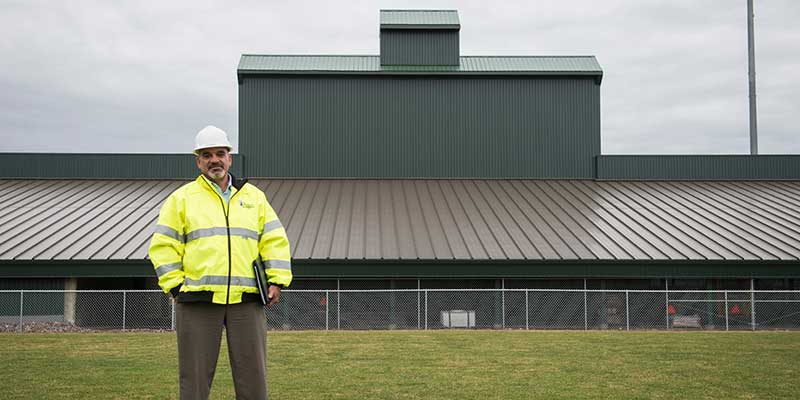 Major snowstorms like the historic blizzard Burlington endured in early March are never much fun for Sam Conant, grounds maintenance specialist at the University of Vermont, whose job it is to plow campus roads, parking lots and walkways – often in darkness and frigid cold.

But things were a bit easier this winter. In the past, when Conant wanted to switch from plowing snow to blowing it, often a more efficient means of snow removal, he had to attach an industrial strength snow blower to his tractor in the outdoors where the fixtures were stored, clearing off snow, wrestling with frozen hydraulic hoses and angling the vehicle just so for a successful hitch.

“You had to do a lot of moving around to get a straight shot,” he says.

This year the snow blowers are stored inside in a heated area, which also houses the tractors and the plows. Getting ready to go takes minutes, not half an hour in icy, blowing conditions.

The more humane arrangement is the result of an unlikely recycling project.

What was once a mammoth stand of bleachers facing the old soccer and lacrosse fields at Centennial Field has been transformed – improbably – into a roofed storage facility belonging to UVM’s Physical Plant Department, which houses everything from the snow removal equipment to electrical and plumbing supplies to roofing materials.

The new facility is the brainchild of Sal Chiarelli, Physical Plant director.

After the soccer and lacrosse teams decamped to Virtue Field in 2012, leaving behind the bleachers – long planks of redwood affixed to a giant steel frame – Chiarelli puzzled over what to do with them.

They rarely held spectators for the intramural and club sports games held on the field. But they had to be good for something.

“I like to reuse, repurpose,” Chiarelli says. “I thought, if we took down and recycled the steel, maybe we could build something new for our vehicles.” But he scrapped the idea, since getting a permit for a new facility would be a major challenge.

One day it dawned on him. The steel frame of the bleachers could serve as the mother of all recycling projects – forming the skeleton of the new storage facility his department had needed for years, one that was nearly built; all it required was a roof to span the structure and a few walls.

Chiarelli sketched out his unorthodox vision to finance VP Richard Cate, then his boss, who quickly saw its merit, since the project squared with UVM’s recycling ethos and would be far cheaper than building a new facility.

Chiarelli charged Luce Hillman and Scott Goodwin on his staff with developing a plan of action to make the conversion happen.

The team had the redwood seats removed from the bleachers, selling them to a vendor for about $6,000, then hired a contractor to build the roof over the structure, bolting it to rows of galvanized steel straps that were installed at the steel frame’s highest points.

About a third of the new building was enclosed so it could be heated and house the fleet of snow removal tractors and the rest was caged with wire mesh to keep the contents inside secure.

Happier and more productive groundskeeping staff aren’t the only benefit of the new facility, which was completed in the fall after three months of construction.

It also consolidates all the odds and ends of department equipment scattered in basements, barns and storage closets around campus, saving staff countless hours spent locating grass seed, exterior lighting, valves and countless other objects before they could get to work.

The new building also makes it possible to inventory materials for the first time and to store groundskeeping equipment like lawn mowers inside, which had to survive winters outdoors, prolonging their life.

The new facility has made Chiarelli even more popular than the gregarious Physical Plant director already is, since everyone on campus, it seems, needs new storage space and covets a piece of the new facility. Athletics and club sports already have designated areas in the facility, and Chiarelli is talking with the Davis Center.

In a next phase of the project, Chiarelli plans to pour a cement floor in the large open area of the facility, install heavy duty shelves to make use of the building’s vertical space, bar code his inventory and retrieve it with a forklift when it’s needed.

He hopes to raise funds for the cement floor from other the departments who’ve expressed interest in using the facility.

Chiarelli’s Amazon-like vision of the transformed bleachers would have shocked those sitting in them to watch UVM soccer games or before that, UVM football.

“Even though I was an engineering student, my mind wasn’t creative enough to have envisioned this use,” he says. “It’s fantastic." 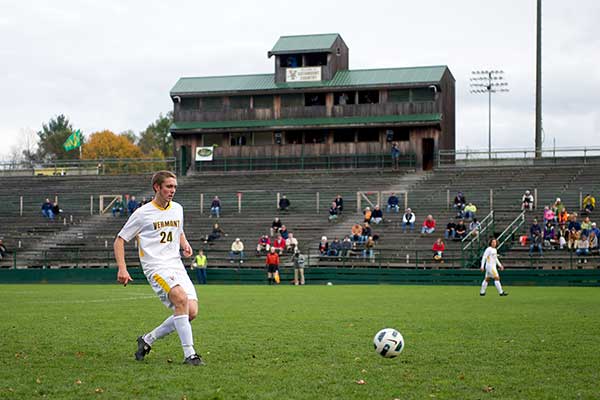 The bleachers as they once were.