The terrifying, inspiring, frustrating, fulfilling, and hard-working life of an artist 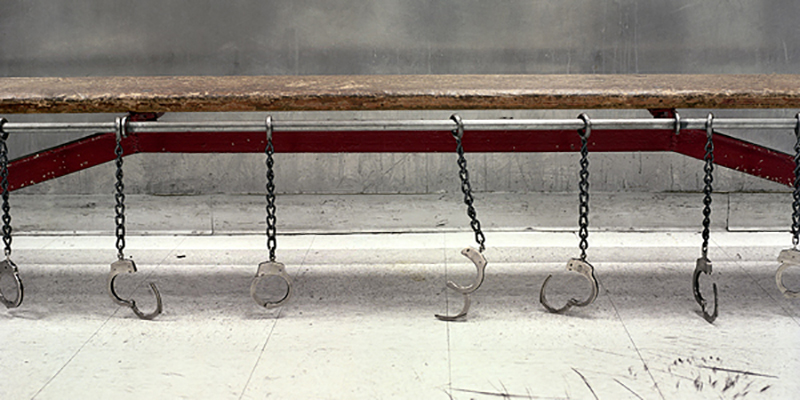 LAPD Fifth &amp; Wall Station, Booking Bench, 2004, color coupler print. "There are some places that you never want to see the insides of. These are the places sought out in Architecture of Authority," says Ross. (Photo: Courtesy of Richard Ross)

While Richard Ross traveled in the Middle East in the summer of 2006 photographing for his collection titled "Architecture of Authority," the walls of Beirut began to crumble. With "options disappearing fast," Ross escaped to Syria with a driver from Damascus who knew the mountain roads. "It sounds sexy and dramatic," he says, "but there was really no fear, just a lot of waiting." The photographer and professor of art at the University of California-Santa Barbara has traveled the world exploring challenging places and situations in pursuit of his work, which often blurs the boundaries of photojournalism and fine art. Ross's images from the prison at Guantanamo Bay illustrated a 2005 cover story of Time Magazine; they also appear in his "Architecture of Authority" collection, featured in an Aperture traveling exhibit.

Ross's interests as a photographer range widely. One book features his photos of bomb shelters; his "Fovea" collection gathers 35 years of images taken with a cheap plastic camera; "Leela," couples hundreds of Ross's portraits of his daughter with her own journal entries to create a brave look into the transition of adolescence. Working as a principal photographer for the Getty Museum also numbers among Ross's pursuits and it led to fine art photography exploring items in storage, from the world's natural history museums to a vast storeroom of vintage Nike gear. The photographer says he doesn't try to separate his editorial and fine art work. "They're pretty tight. One feeds the other. It's like cooking. You don't use just one burner; you get all four going at once." And he doesn't regret the loss of artistic control that being a photojournalist sometimes requires. "You learn to work with other people," Ross says. "It gets beyond the pure ego of the artist."

"Barely an adolescent" when his parents dropped him off at Wills Hall, Ross was a 16-year-old Jewish kid from New York City paired with a roommate who "had never seen a Jew." He had never been to Vermont before that trip, but quickly grew to love mid-1960s Burlington. A political science major and chemistry minor as a UVM undergraduate, Ross says the lessons of professors such as Donald Gregg and Raul Hilberg "influence me to this day." That lasting impact paired with the influence of his wife, Cissy, a longtime journalist, to nudge Ross's art to evolve "from work that was unabashedly beautiful to work that is more politically active."

Ross's recent work explores the juvenile justice system. He will a deliver a public talk, "Art as a Weapon of Social Change," in the Livak Ballroom of the Davis Center on April 2, 2018, 4-7 p.m., and his photos will be on display in the Davis Center's Fireplace Lounge through the month of April.

A version of this story originally appeared in Vermont Quarterly, Fall 2006.