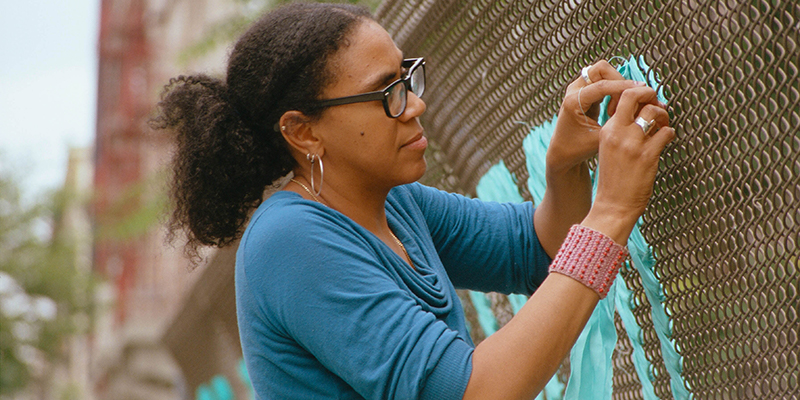 Professor of drawing and printmaking Mildred Beltré. The longtime resident of Crown Heights in Brooklyn is taking art to the streets, creating collaborative projects that build gentrification resilience and community. “This is a way to claim a generative, creative space on the street together,” Beltré says. (Photos: Scott Dolan)

Mildred Beltré’s neighborhood in Crown Heights, Brooklyn, has it all: the sprawling greenery of Prospect Park, world-class art and events at the Brooklyn Museum, beautiful brownstones around every corner, and nearly any cuisine one could crave—all within walking distance. But after 20 years in her apartment, the native New Yorker and UVM professor of drawing and printmaking says the rest of the borough has finally caught on. Gentrification is rapidly transforming Crown Heights.

For longtime residents like Beltré and Oasa DuVerney, a fellow teaching artist in Beltre’s building, the influx of people and renovations that come with gentrification create a revolving door of fleeting neighbors and businesses; a vulnerability to rent inflation and landlord corruption; increased policing; and a sense of mistrust and suspicion. But the duo isn’t letting their block on Lincoln Place get swallowed up by Brooklyn’s growing hipster scene so easily.

Nearly 10 years ago, the two artists took their art supplies, pop-up tents, tables, and chairs out to the sidewalk in front of their building. Together, they hoped to attract curious passersbys and befriend their neighbors while they made art. Since then, the “Unofficial Official Artists in Residence” of Lincoln Place have evolved the experiment into Brooklyn Hi-Art! Machine, a collaborative public art project that builds gentrification resilience and community on their block through art.

“An important part of the project is being there on the street. Something that happens in gentrification is a lot of policing, and any black or brown body on the street is perceived as criminal. This is a way to claim a generative, creative space on the street together,” Beltré says. 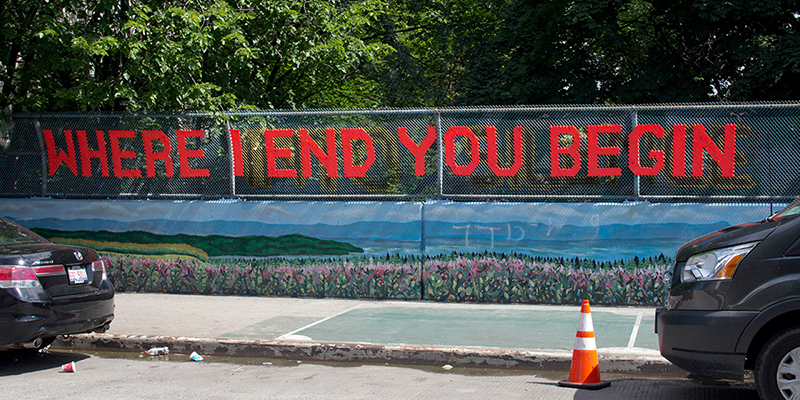 She and her neighbor have taught mediums like weaving, dance, sculpture, drawing and silk screening to their community; they’ve planted gardens and invited guest artists to create site-specific installations on their block; and have hosted barbecues and tenants’ rights meetings through BHAM. They once even set up shop on the street to offer professional sewing and drawing services to their neighbors. Beltré says she hemmed a lot of crop tops for 13-year-old girls that summer while DuVerney sketched everything from portraits and greeting cards to tattoo designs.

But if you find yourself on her street, you’ll likely see one of their annual works on display roughly one-third of the way down the road, where chain-link fences line a portion of the street and act as a bridge. Each year, Beltré and BHAM weave bright strips of fabric and ribbon into the fences to form powerful phrases like “If you can’t find the truth where you stand / where can you find it?” and “Do not disappear into silence.”

“Even though it’s a bridge, it acts as an interesting divider on the block. One side is immigrant black people and the other side is American black people. That was a real source of tension on the block. Setting up on this bridge, it becomes a place to come together,” Beltré explains. Residents work together on the fences for about a month and welcome questions and conversation about the bold words from each other and pedestrians. “We tell them we live right there and it really changes the conversation. I think people are used to artists coming in and then leaving, but for us—living there—we’re held more accountable.”

In the decade that Beltré’s co-spearheaded the project, she says she’s certainly gotten to know her neighbors better, but more importantly, she’s helped build real ties and enact real change in her community. Along the way, BHAM has gained local recognition for the combination of art and social justice issues they tackle. Beltré, DuVerney, and BHAM’s work was recently displayed by the Brooklyn Museum, has appeared in the Brooklyn Children’s Art Museum, and has been awarded a Brooklyn Community Foundation grant to support neighborhood strength.

Through Arts in Action, a semester-long College of Arts & Sciences internship program, eight UVM undergrads are currently living in Brooklyn, working with community arts organizations. Beltré has led the effort on landing internships and teaches an online class to supplement the experience as students earn 15 UVM credits for the semester.

Art and Art History at UVM