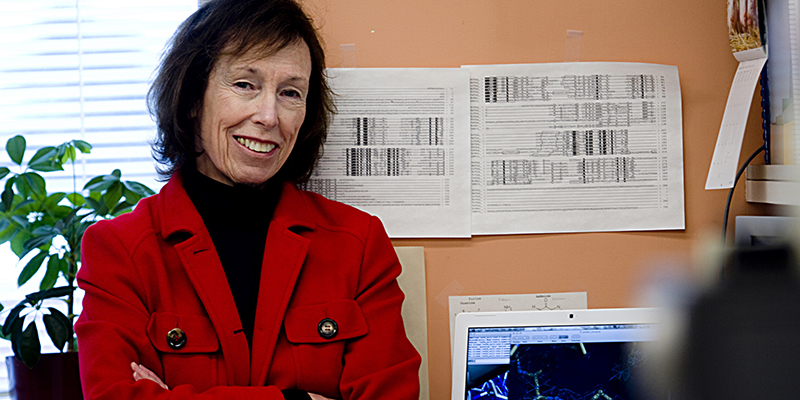 The American Academy of Arts & Sciences has announced the election of University of Vermont Professor of Microbiology and Molecular Genetics Emerita Susan Wallace to its membership in recognition of her status as a world leader in the sciences. Wallace joins 275 new members elected on April 23, 2020.

Academy members represent innovative thinkers in every field and profession, including more than 250 Nobel and Pulitzer Prize winners.

Wallace, who served as chair of UVM’s Department of Microbiology and Molecular Genetics for 30 years before her retirement in 2018, played a significant role in providing a much greater understanding of the fundamental DNA repair mechanisms involved in the development of cancer, as well as the effects of radiation damage to the genome. More recently, her research, which was supported by more than 47 years of consistent National Institutes of Health funding, explored a potential link between certain DNA repair protein variants in the human population and an increase in the risk for some types of cancer. She is the author of more than 200 biomedical journal articles and trained many successful graduate students and postdoctoral fellows during her career at UVM.

“It is both an honor and a privilege for me to be chosen as a member of this distinguished group,” said Wallace. “I am looking forward to working together with Academy members to keep basic science research at the forefront of our Nation’s goals.”

Named a UVM University Distinguished Professor in 2011, Wallace was one of only a few scholars who chaired a department across two colleges – the Larner College of Medicine and the College of Agriculture and Life Sciences. Her many honors include election as a Fellow of the American Association for the Advancement of Science; the Harvard School of Public Health’s John B. Little Award for Outstanding Contributions to Molecular Radiobiology; the Environmental Mutagenesis and Genomics Society Award for Fundamental Studies on Repair of DNA Damage Caused by Environmental Agents and for her Exemplary Leadership; and the Failla Award from the Radiation Research Society. Her leadership roles at UVM included service as the director of the Department of Energy Vermont EPSCoR Program, director of the Vermont Cancer Center (now UVM Cancer Center) Genome Stability and Expression Program, director of the Cancer Biology Training Program, and associate director for basic and translational science in the Cancer Center.

“The members of the class of 2020 have excelled in laboratories and lecture halls, they have amazed on concert stages and in surgical suites, and they have led in board rooms and courtrooms,” said Academy President David W. Oxtoby in the organization’s announcement. “With today’s election announcement, these new members are united by a place in history and by an opportunity to shape the future through the Academy’s work to advance the public good.”

“Election to the American Academy of Arts & Sciences is a signal accomplishment for a scholar,” said Suresh Garimella, president of the University of Vermont. “It is a fitting tribute to Dr. Wallace who, through a long and distinguished career, has made significant contributions to our understanding of how cancer develops and factors that increase its risk. We are very proud of her at UVM and offer our heartiest congratulations.”

“Over her long career here in Burlington, Dr. Wallace distinguished herself as an exceptional leader, mentor and scientist,” noted Richard Page, dean of the Larner College of Medicine. “Her fundamental discoveries have advanced our understanding of the role DNA repair plays in development of cancer and the effect of radiation on the genome. Our entire Larner community congratulates Dr. Wallace, and we celebrate this well-deserved honor with her.”

“This recognition is a testament to Dr. Wallace's contributions to science and leadership as a female pioneer in the field of genetics,” said Jean Harvey, dean of the College of Agriculture and Life Sciences. “It has been a pleasure and privilege to have had the opportunity to work with Dr. Wallace over the years. On behalf of the College of Agriculture & Life Sciences, we join in congratulating Dr. Wallace on this significant achievement.”

The American Academy was founded in 1780, during the American Revolution, by John Adams, John Hancock, and 60 other scholar-patriots who understood that a new republic would require institutions able to gather knowledge and advance learning in service to the public good. The Academy is both an honorary society that recognizes and celebrates the excellence of its members and an independent research center, convening leaders from across disciplines, professions, and perspectives to address significant challenges.