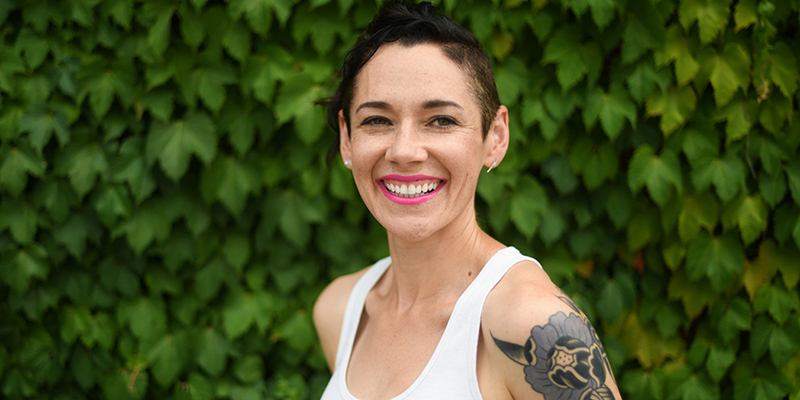 In her time on the White House Office of Management and Budget's communications staff, Meg Little Reilly ’01 absorbed the sense of mission that drove long days, a key impetus as she began to explore her own writing. “I was seeing people around me taking big risks, even failing, and realizing that it doesn’t break you,” Reilly says. (Photo: David Seaver)

Meg Little Reilly’s third novel, The Misfortunes of Family, published this spring by Mira Books, unspools the lives of Massachusetts politician John Bright and family, as the retired senator considers another run for office while world events and long-buried personal secrets thicken the plot. The story is grounded across several summer weeks at the Brights’ lakeside retreat in the Berkshires, an idyllic, burnished setting—maybe a little too burnished—like the family themselves.

Reilly ’01 puts her narrative in the hands of the partners of the Bright’s four sons, “the extras,” as they refer to themselves, living in the shadow of the blood Brights’ out-sized regard for themselves. “It’s really a story about how families create these distinct codes and habits—what it looks like to come in from outside,” the author says. “There’s something kind of unknowable about families in this way.” A married mother of two daughters, Reilly says she believes these are questions common to the stage of life she’s in: “Who are you now? What is your adult identity? What are the habits that you want to perpetuate and the ones you want to let fall behind?” she asks.

While themes of family are universal, the rarified world of national politics and media is informed by years Reilly spent working in Washington, D.C., where she was on the communications staff in the White House Office of Management and Budget during the Obama Administration. Reilly recalls the sense of mission, reverence for the work that drove twelve-hour days at the Executive Office Building adjacent to the West Wing. Absorbing that atmosphere was a key impetus as she began to explore her own writing. “I was seeing people around me taking big risks, even failing, and realizing that it doesn’t break you,” Reilly says.

She decided it was time to act on long-held dreams to write novels. Reilly started setting her alarm for 5 a.m., writing for an hour each morning before getting on the White House communications call. “I caught a little hubris,” she says with a laugh, “and I’m grateful for it.”

Reilly, a native of Brattleboro, and her husband, Daniel, relocated to northern Vermont in 2017. Today, she juggles family, a full-time job writing for the president of Bennington College, and writing fiction and essays. She generally tries to abide by her D.C. habits of writing fiction early in the day. But even when other aspects of her life might crowd out a long stretch for writing, she’s religious about getting down some words daily. “To me that is super important; there is a kind of propulsive energy to it that I need to sustain,” she says.

Looking back at her UVM years, Reilly says she was initially drawn to the spirit of activism on campus—“it felt like students there were truly engaged with the world.” She found a mentor in the late geography professor Glen Elder, explored creative writing in a first-year program in Living/Learning, and sampled courses broadly in the liberal arts. She says she became a much better reader at UVM, the first step to becoming a better writer. Reilly went on to earn a master’s in media and public affairs from George Washington University.

As a novelist, Reilly says that reading the work of others for a couple of hours most evenings is both a reward and a challenge. “I read aspirationally. I always try to read people who just make me want to be better at this. If you’re reading books where you think, ’I could do this,’ then you’re not reading the right books.”