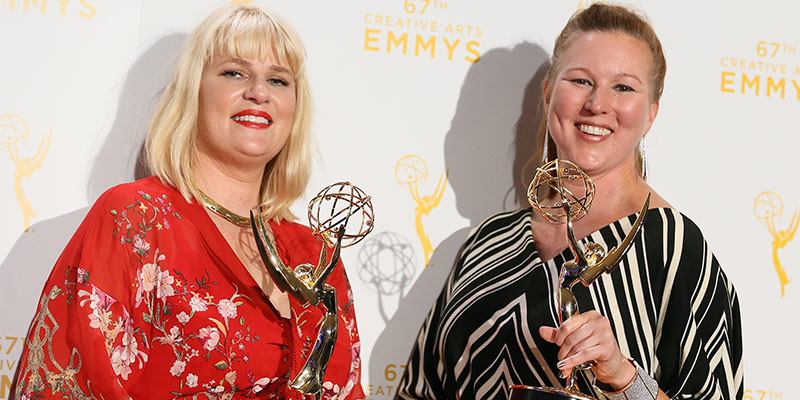 Marie Schley, UVM Class of 1994, has won a 2015 Emmy Award for her costume design work on Transparent. The Creative Arts Emmy Awards were announced on Sept. 12, a week before the televised Emmys. Schley and her colleague Nancy Jarzynko were honored for their work on the Amazon Studios comedy-drama that revolves around a transgender character played by actor Jeffrey Tambor.

We caught up with Schley this week via e-mail.

Q. Congratulations on the Emmy. What does that achievement mean to you?

A. Of course it’s amazing and wonderful to win the Emmy, but especially for this show, which has so much heart and love and passion at its core. The show has a profound message for the world about authenticity and acceptance of one’s true self. I am honored to have been a part of that message.

Q. Tell me about the particular challenges or opportunities dressing transgender characters for Transparent.  What have you tried to achieve in your costuming of Maura Pfefferman?

A. Ultimately, I was dressing a fully rounded person, not just someone whose only facet is that they are transgender. Maura is in her late sixties. She has a bad knee. She was a professor who taught at Berkeley in the seventies. She’s from an upper middle class background. She is liberal and well traveled. She has a beautiful mid-century house in the Pacific Palisades. These were all factors that I took into consideration when thinking about what Maura would like and how she would like to present herself to the world.

Q. Is it an interactive process working with Jeffrey Tambor on the show?  Does he have costumes he prefers, thoughts on ways the character should dress?

A. It is definitely an interactive process. Jeffery and I talked about who would have influenced Maura’s style choices. Maura was a young adult in the seventies, and we decided she would have been influenced by some of the women of that time like Stevie Nicks and Mama Cass. But some costume choices were made in a less cerebral way and were more visceral. For instance, during the pilot and in my first fitting with Jeffrey, I tried dangling earrings on him, and he immediately said, “Oh, that’s nice! I don’t know why, but I like the movement." He began to feel Maura come alive. After that we tried some flowing pants and a top. The sensuality and comfort made him feel like Maura. It made sense because of where Maura was in her life and in her transition to a woman.

Q. Was costume design part of your college days at UVM?

A. No, it was not. I was an English major with a minor in anthropology. I went to fashion school after I attended UVM. I was always interested in stories and clothes. Costume design is the marriage of the two. In order to create costumes you have to understand the story that is being told and the characters within it. Then you translate that into a visual language of clothing. Costumes help tell the audience about a character's personality, life experiences, socio-economic background. They tell the audience where the characters are coming from and where they are going.

Q. How did you work your way into the film and television world?

A. I got into the costumes after I graduated from UVM. I drove cross-country the summer after graduating and decided, on a whim, to settle in L.A. when I got here. After looking around at the different jobs in film and TV, I decided I wanted to work in costumes. After that decision, it was years of working on independent films and short films for very little money and bigger projects for other established and brilliant designers who taught me how to be a costume designer. I went to Fashion Institute of Design & Merchandising in L.A. and just kept working on things. The important part has been learning from others, figuring out what kind of work I wanted to do, and then just working, showing up and doing the best I could.

Q. Do you have favorite outfits you’ve created for Transparent?

A. Yes, I love the rainbow caftan that Maura wears to Shabbat dinner. I found it in a vintage store months before we started prepping, and I bought it. It summed everything up about Maura. It is a rainbow, it’s a groovy caftan, it was made in Israel and it is comfortable.

Q. Finally, sorry, I’ve got to ask this. As a costume designer prepares to go to the Emmy Awards, is deciding on what you’ll wear an easy process or an agonizing one? What did you wear?

A. Deciding what to wear to the Emmys is difficult because you want to look good! But, I mean, I do love clothes… so I just decided to have fun with it, and I wore a caftan for Maura.