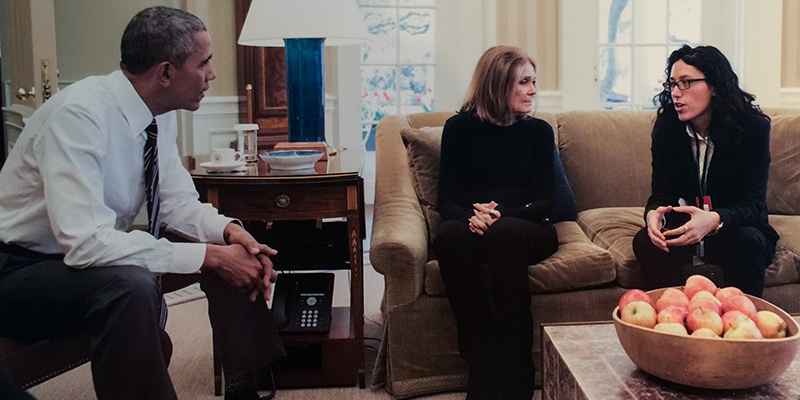 Ariel Wengroff '10 talks with President Barack Obama and Gloria Steinem. At just twenty-six years old, Wengroff became the youngest person in Emmy history to be nominated as an executive producer in the nonfiction or documentary series category for her work on the docuseries “Woman with Gloria Steinem.” (Photo: Courtesy Ariel Wengroff)

In 2016, Ariel Wengroff ’10 walked the red carpet with Gloria Steinem and — at just 26 years old — became the youngest person in Emmy history to be nominated as an executive producer in the nonfiction or documentary series category. While she may have been in good company that night, Wengroff once again finds herself in the presence of greatness at the age of 29 as one of Forbes’ “30 Under 30” trailblazers in media.

“As Gloria Steinem says: 'We are linked, not ranked.' Being a part of Forbes ‘30 Under 30’ is a huge honor and it’s important to also remember the amazing work that is not reflected on the list,” says Wengroff. “Hopefully, it will allow me to continue to share the hidden stories around the globe of those who need it most.”

A former English major at the University of Vermont, today Wengroff’s work in media helps illuminate marginalized communities and amplify disenfranchised voices around the world. A powerhouse at Vice Media, her current roles there include being publisher of Broadly, a women’s- and LGBTQ+-focused channel of Vice Media, as well as executive producer of Viceland’s Emmy-nominated “Woman with Gloria Steinem,” a docuseries hosted by feminist and activist Gloria Steinem that explores worldwide gender-based violence and struggles of women. She is also a board member of Lesbians Who Tech.

“Young people today feel like they’re stuck with the world’s problems,” she says. “It’s important to create content and tell stories that shine a light on serious issues, but also have a positive solution or moment of change. There are courageous people fighting for change, and with the political fracture around the world, I hope to bring the truth to the forefront and help find solutions.”

This year, Wengroff joins 600 other “bold risk-takers putting a new twist on the old tools of the trade” who made Forbes’ annual list. Her fellow innovators span 20 different categories, ranging from consumer technology pros to immigrants, and include another UVM connection: 29-year-old chemistry professor Michael Ruggiero.

Wengroff’s journey to impactful storytelling wasn’t always her plan, however. She admits that during her time at UVM, she thought she would be a poet — and likely a talented one at that. As a student, she earned the English Department’s Benjamin B. Wainwright Prize, a poetry prize awarded each year to one student with the best poem submitted. After graduating from UVM, she took a detour into politics before finding her home at Vice. She worked for the Executive Office of Governor of Vermont during the Peter Shumlin administration, for the Vermont Democratic Party, and for the Welch for Congress campaign.

“I was so fascinated by how people communicate and as I’ve shifted from poetry to politics to media, that hasn’t changed,” says Wengroff. “I felt that if I continued in politics, I would get buried in red tape and wouldn’t be able to make progress. And then I realized that storytelling and being as close to knowing someone yourself gives you the best chance to relate and change the way you think. Media became the natural next step, as it has the largest audience that you can immediately connect with.”

Off the top of her head, Wengroff can name a handful of professors who pushed and honed her writing skills over the years. She also credits her time in Burlington and experience at UVM for shaping her into the engaged global citizen and storyteller she is today. “Going to UVM and being in Burlington completely changed my life. Burlington, The Radio Bean and the creative writing program, The Inkpot, at Living/Learning was my everything. It taught me to challenge the norm and the status quo, to protest on campus and fight for what I believe in.”