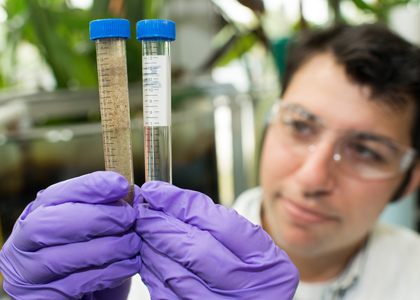 The award for the Aiken Center, home to the Rubenstein School of Environment and Natural Resources, is especially noteworthy because it recognizes work done to renovate an existing structure; the original was built in 1982. The 41,000 square foot refurbished Aiken Center opened in January 2012 after an 18-month, $13 million renovation.

“I am very proud that the George D. Aiken Center has achieved the U.S. Green Building Council’s highest honor, the LEED platinum designation,” said UVM President Tom Sullivan. “It is certainly the appropriate home for UVM’s Rubenstein School of Environment and Natural Resources. Congratulations to all who made possible this signature accomplishment.”

"This designation was made possible by incredible participation and collaboration of our community through the design, fundraising and building phases," said Jon Erickson, interim dean of the Rubenstein School. "Now Aiken is a living lab, engaging our students, staff, and faculty in research and education on building performance, storm and waterwaste treatment and our workplace behavior. “

In all, Aiken earned 60 of 69 potential points in the LEED evaluation, or 87 percent of the total. Although the LEED scoring system has changed over the years, no other Vermont building has achieved such a high percentage of the total points possible. In the current scoring system, 52 LEED points earns a platinum award.

LEED grants points across six categories, with many subcategories in each, but several aspects of the building’s design stood out for the LEED review committee:

The University of Vermont is home to more than one million square feet of LEED-certified space, in eleven buildings. In addition to the Aiken platinum, seven UVM buildings are certified at the LEED gold level and three at the silver level. UVM adopted a green building policy in 2004 stating that all new construction and major renovations must be formally commissioned and achieve LEED silver certification or the equivalent.

Students have played an important role throughout the process of the Aiken Center’s renovation. Classes have been involved in the design, implementation and monitoring of many of the building’s green features. Student interns are working on dozens of annual research projects including water quality monitoring from the green roof, energy efficiency rating and improvements and a prototype for a green wall to enhance indoor air quality.

The project was supported by more than $4 million in private contributions, in addition to a $900,000 grant from the EPA funded by an appropriation secured by Senator Patrick Leahy of Vermont.

Architects for the building were William Maclay Architects of Waitsfield, Vt. The general contractor was PC Construction Company of South Burlington, Vt. 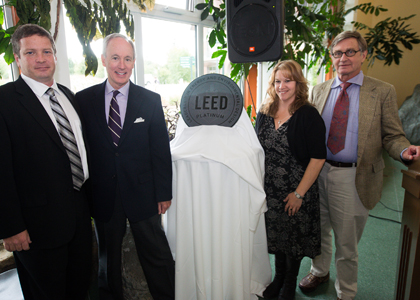