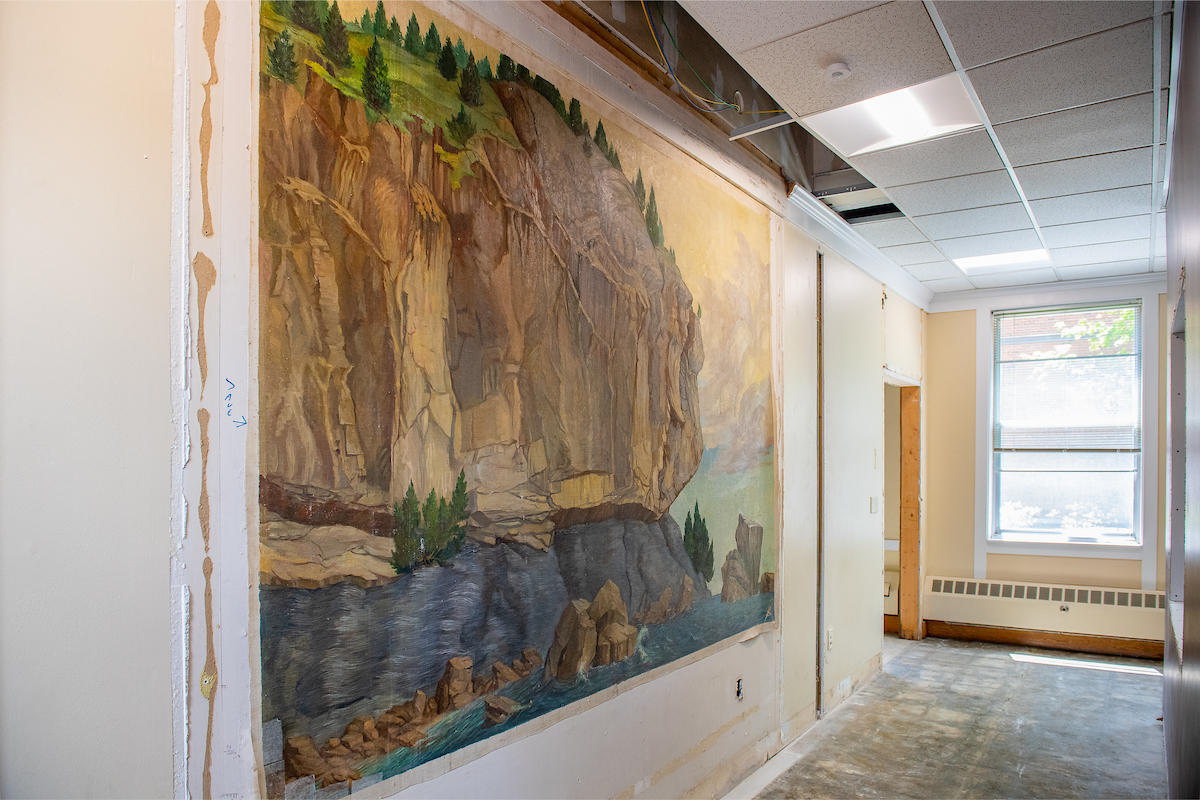 Mural of the Champlain Thrust geologic feature painted by Raymond Pease in 1934 was discovered in Perkins Building during the College Engineering Building 2019 renovation.

Geologists typically get excited about features that are millions of years old, or at least thousands, but rarely decades old. . . until now.

During the May 2019 renovation of the University of Vermont Perkins Building, a constrution crew-member discovered a painting of a Vermont geologic treasure behind a hallway wall. He carefully removed the false wall to expose a 1934 mural of the Champlain Thrust by Burlington-born artist Raymond S. Pease, 1908-1990. The Perkins Building had been the home of the UVM Geology Department and the Perkins Museum of Geology until 2004 when the Department and the Museum moved to Delehanty Hall on UVM's Trinity Campus.

A letter written by former Perkins Musuem of Geology curator, 1990-1993, Jeff L. Howe, was concealed behind the wall with the mural, and provided insight into the story of the hidden painting.  "Our original goal during the 1991-93 museum renovation was to transfer this painting over to the north wall, but upon taking the wooden frame down we discovered that someone had glued the entire canvas to the wall. Why this was done, . . ."  Full Howe letter (PDF)

Art conservator, Emily Phillips, of Phillips ART Conservation, put a protective covering on the 85 year old painting, carefully removed the 9'x 6' canvas from the wall and rolled it onto a custom-made spool, then delivered the painting to the Geology Department, where it awaits restoration and ultimately installation in the Perkins Museum of Geology in Delehanty Hall once funding is available.

The discovery leads to another mystery: where are the side panels of the triptych? Devin Coleman, State Architectural Historian of the Vermont Division of Historic Preservation, says," As noted in the letter, this painting was executed for the geology exhibit at the Fleming Museum. It was originally part of a triptych, with a panel on the left depicting Samuel de Champlain and a panel on the right depicting missionaries. There is a 1934 article about the project with a photo of the triptych. I wonder what became of the side panels?"

Where indeed? However, we now know where the center panel lives.

Coleman also notes, "What’s really interesting is that this is an early example of a New Deal art project. More research needs to be done to identify the specific agency that paid for the work, but it was most likely the Public Works Administration (PWA)."

Pease painting in the news: