What is the Champlain Thrust?

One of the geologically most famous localities in Vermont (along with the world’s oldest reef in the Champlain Islands) is the Champlain Thrust, visible along the shoreline of Lake Champlain at Lone Rock Point, in Burlington, Vermont. In order to understand its significance we need to first understand what a “thrust” is. A “thrust” (geological shorthand for a “thrust fault,”) is a type of fault. A fault is a fracture in rocks where there has been movement. There are several types of faults and a “reverse fault” is one where older rocks have been pushed up over younger rocks. Geologists call a reverse fault where the fault is at a low angle to the Earth’s surface, a “thrust fault”. 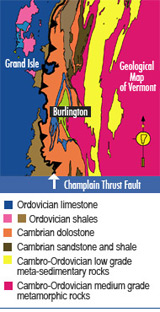 So, the Champlain Thrust is a low angle fault where older rocks have been pushed up and over younger rocks. In this case, rocks of the Cambrian Period (542 to 500 million years ago) have been pushed up and onto rocks of the later, younger, Ordovician Period (460-440 million years ago). Rocks accumulate on the Earth’s surface in a predictable order, not unlike assembling a layer cake: placing the oldest layer on the plate and subsequent layers on top, and coating it all with frosting. So do rock layers accumulate on the Earth’s surface: younger layers sit on older layers. At Lone Rock Point in Burlington you can see where the Champlain Thrust has pushed older layers up onto the younger layers, reversing the order.

Geologists and University of Vermont Department of Geology faculty and students visit Lone Rock Point in Burlington because of the quality of the exposure of the rock layers and the features in the rocks that were produced from fault movement. No need to worry about this fault moving any time soon! The Champlain Thrust was active at the time the Green Mountains were elevated, nearly 450 million years ago.

Champlain Thrust was once the name of the, now retired, University of Vermont, Department of Geology newsletter.