Listening to Farmers’ Voices in the Ecosystem Services Discussion 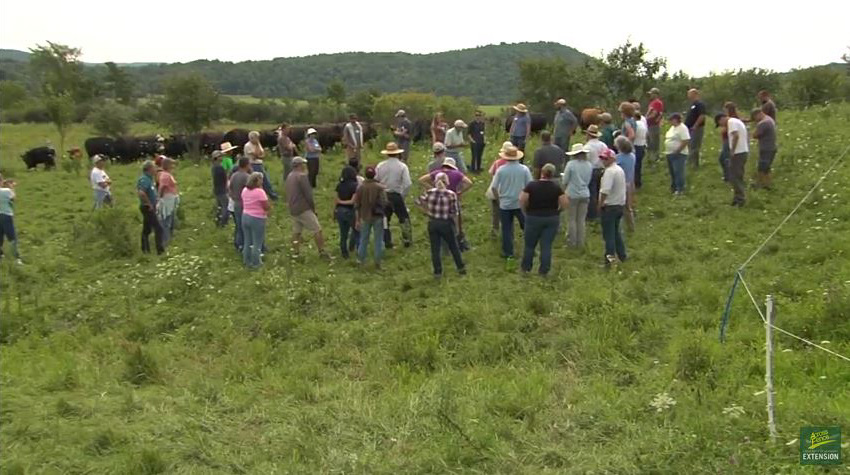 Farmers care deeply about the land and the impact that their practices have on it.  But when “best practices” are so expensive that they threaten their ability to stay in business, they’re simply not likely to use them.

Those are among the lessons learned from the Payment for Ecosystem Services Farmer Groups that Farming & Climate Change Coordinator Joshua Faulkner and researcher Alissa White have been hosting over recent months.  The conversations are part of a larger project looking at “how different practices on northeastern dairy farms can help build resilience to weather extremes in a changing climate, and also help improve the quality of the soil and water around them.”

This USDA-funded research project began in 2015, and has come into sharper focus since then, with a special opportunity to learn more about the concept of paying different kinds of farmers not just for the food, fiber or fuel they produce, but also for the ways that their practices have ecological benefits for the ecosystems they’re a part of.  Not long ago this seemed like a fringe concept - but now it’s something that’s part of a lot of conversations.

Alissa White says it’s a convergence of challenges, “There are two major crises in Vermont.  On one hand, many people are talking about dairy farms and the financial crisis that’s affecting them.  Dairy is a huge part of the agricultural landscape and identity of Vermont towns and the state overall.  At the same time that farmers are going out of business, the state is under huge pressure to address water pollution caused by phosphorus (the so-called “TMDL”), and if we don’t figure it out adequately on the local level, the federal government is going to tell us how to do it.”

She says, “So what we’re trying to figure out is whether we can make it financially plausible for all sorts of farmers, whatever they’re raising, to stay in business. Can we just pay farmers to do the right thing and address both problems?”

The goal is to bring farmers’ voices into the research on ways that farmland can be managed for ecosystem services, and also to understand what farmers are thinking about when they make choices for how they go about their work.  This is important information for policy-makers who are considering paying farmers for ecosystem services, and want to make sure new policies will work for the people most affected.

Joshua says, “We’ve been trying to really dig in to this to make sure anything that folks in Vermont would want to implement is one that would work.  Questions like, “If there were a payment system, how would (farmers) be interested in it and what would the concerns be? Farmers wanted to know what it would cost, and who might oversee it, and would the payment level be actually meaningful?”

The discussion sometimes focuses on specific points like carbon sequestration, but Joshua notes, “Farmers provide such a wide range of benefits, and we can probably do better if we can keep the conversation from getting too narrow.”

Farmer Brandon Bless of Bread & Butter Farm took part in the second group meeting.  Farmers are eager to be responsible stewards of the land and water they’re a part of, and incentives are a lot more attractive than punitive approaches, he says. “We don’t only want something that’s going to just stop us from doing bad things.  What we’d really like is to be acknowledged for the gains we’ve made, and have access to resources that can help us do even better…

"A lot of the folks in the meeting felt like they had the knowledge, and don’t have the resources to put things into place. But if (compensation for ecosystem services) could be a situation in which the grass roots folks are able to access the science to identify the best ways of meeting benchmarks on our own farms - that would be the best.  Top-down approaches are not always applicable on actual farms.”

The project’s next steps are to have one last farmer meeting, and then to synthesize the findings into a format that can be shared with policymakers and other agricultural service providers.

Originally published in the Center for Sustainable Agriculture's April 2019 Fresh from the Field online newsletter.

Primer on Payments for Ecosystem Services put together for the Vermont Grass Farmers Association by Benneth Phelps and Connor Stedman
Multi-Year USDA Funded Project: Increasing Ecosystem Services and Climate Change Resilience In Dominant Agroecosystems of the Northeast
This short article from 2015 about research into how managing for biodiversity, a critical component of ecological farming, connects with animal health and human nutrition as well.
The Center's Pasture Program is the Vermont lead partner in the Long Island Sound Watershed Regional Conservation Partnership Program (LISW-RCPP), with a specifc focus on understanding how technical assistance on individual farms can ultimately have