Department of Communication Sciences and Disorders

Dr. Shelley Velleman's educational and professional experience has been extensive and varied, with a common theme of speech production in children. Her Ph.D. from the University of Texas at Austin (1983) is in Linguistics, with a specialization in child phonology (speech development). She has one master's degree in Applied Linguistics (teaching English as a second language) from the University of Wisconsin-Madison (1978) and one in Communication Disorders/Speech-Language Pathology from the University of Massachusetts (1985). She has many years of pediatric clinical experience as well as many years of teaching as a tenure system faculty member at the undergraduate and graduate levels at Elms College in Chicopee, MA and at the University of Massachusetts - Amherst, where she was an associate professor of communication disorders from 2005- 2011.

Dr. Velleman's research focuses on speech sound development in typically-developing (TD) children and in children with disorders. Her studies of TD children have focused on how the language or dialect of exposure affects the process of learning to talk, including such languages as English, French, Japanese, Finnish, and Welsh as well as the African American English dialect. With respect to disorders, she specializes in motor speech disorders, especially Childhood Apraxia of Speech. She seeks to identify and remediate the motor speech, phonological, and literacy difficulties associated with neurodevelopmental syndromes, such as autism spectrum disorders, Down syndrome, Williams syndrome, and 7q11.23 Duplication syndrome (which was just identified in 2004). 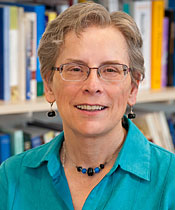 Speech sound development in typically-developing children and in children with disorders from a variety of dialect and language backgrounds; Childhood Apraxia of Speech; motor speech, phonological, and literacy difficulties associated with neurodevelopmental syndromes, such as autism spectrum disorders, Down syndrome, Williams syndrome, and 7q11.23 Duplication syndrome (which was just identified in 2004)