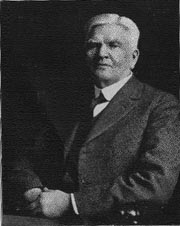 Available records appear to support the fact that Samuel Franklin Emerson, formerly Professor of Greek and Modern Languages at UVM from 1881, was reappointed Professor of History and Sociology in 1889. This use of sociology to designate an academic position is the first or, if not, among the very earliest recognitions of its kind, anywhere. Neither Comte, trained as a mathematician, Spencer, an engineer, nor Marx with a Ph.D. in philosophy ever held a position in the academy. George Frederick Homes, an active correspondent with Comte, doubtless taught appreciatively and critically of Comte's sociology as early as the 1840's, but was Professor of Economy, Belles-Lettres and History at William and Mary, President of Mississippi and Professor of History and Literature at Virginia until his death in 1897. William Graham Sumner of Yale, who is widely and, perhaps, incorrectly credited with having offered the first course in sociology in 1876, had the title of Professor of Political and Social Science until his death. Sumner, himself, preferred the science of society or his own term societology, to sociology. Weber and Pareto held chairs in economics and Simmel was, late in his career, a professor of philosophy. Durkheim was apparently the first European academic to have been given the title. However, he became Professor of Education and Sociology at the Sorbonne only in 1902. Apparently, even Franklin K. Giddings, sometimes cited as the recipient of the "first Professorship in Sociology in the U.S.," was not given this title until 1893.

Sociology first appears at UVM under Political Science in the UVM Catalogue of 1891-92 on the centennial of the founding of the University and just one hundred years ago! These lectures, required of seniors, were most certainly offered by Emerson and were among the very first to be sociological, both in name and in content. Although sociological works had been examined previously in many courses in moral philosophy and in one or another of the more differentiated social sciences, few if any such courses were called by the new and disreputable term sociology. Emerson's course at UVM was clearly in the vanguard of a strong trend from social science to sociology in the early eighteen nineties. At Johns Hopkins both Albion Small and Frank W. Blackmar were introduced to Lester Frank Ward's Dynamic Sociology by Herbert Baxter Adams and to Ward, himself, during the academic year 1888-89. Both offered courses in sociology in 1890, Small at Colby and Blackmar at Kansas. However, because of Small's unexpected elevation to the Presidency of Colby, he had to be satisfied with introducing "modern sociological philosophy" in his Presidential senior course, Moral Philosophy, in both 1890 and 1891. The name of Blackmar's first course is not known. According to the Bernards in their Origins of American Sociology, Brown offered its first course with sociology in the title, "Principles of Sociology," in the Department of History, Political and Social Science in the very same academic year, 1891-92! Courses in sociology began at Columbia with Giddings' arrival in 1892. In 1893 Chicago and Dartmouth introduced their first courses, Pennsylvania in 1894, and so on.

The first hint of the content of Emerson's inaugural course in sociology at UVM is found in the 1893-94 Catalogue. Its focus was "the origin and development of social institutions," a classic concern of macrosociology then, and it remains so today.

Emerson's social characteristics were prototypical of the vast majority of the founders of the social science movement and sociology, itself, in the United States: liberal Protestant clergymen or sons of clergymen from old Anglo-Saxon, New England families who were trained in the classics, exposed to German religious, historical, and social science developments and concerned with an understanding of the emerging industrial society of the immediate post-Civil War era. Emerson, the son and grandson of Congregational ministers, was himself a Congregational minister whose views of religion were singularly undogmatic and historical.

The so-called Ipswich, Massachusetts branch of Emersons from which he came dates from the early Colonial period and includes Ralph Waldo Emerson. His Yale training emphasized Greek, Latin, German and French language and literature, all of which he taught at UVM from 1881 to 1888. He was exposed to German theological and historical scholarship at Union Theological Seminary and at first hand during a two year University sojourn at Tübingin and Berlin. He always retained a broad historical interest in "Western Civilization" but his moral ambivalence and absorbing concern was with contemporary events and processes which led him to propose the introduction of U.S. history and sociology into the curriculum at UVM.

Emerson's focus on the processes leading to contemporary industrial sociocultural organization and those operative within it is further clarified in the Sociology listing in the 1894-95 Catalogue. N.B. His Sociology course is no longer subordinated to Political Science as it was in previous Catalogues. Sociology receives equal billing with History and Political Science for the first time!

In the 1896-97 Catalogue we find the subject matter of the discipline was divided by Emerson into three different courses for the first time. In his Social Theories course classical social theories were augmented by treatments of the sociological theories of Comte, Spencer, Kidd, Gumplowitz, Fouillée and Giddings. Few courses in the U.S. in sociological theory at the time reflected a more catholic selection of theorists. Sumner and Ward were notably missing; as was Marx, who was largely ignored by all but a handful of early American academic social scientists. The Industrial Era was a course that clearly viewed the industrial revolution with its attendant new technologies of production, of work organization, of transportation, of commerce and of urbanization as the keys to understanding modernization and consequent changes in the state, culture and religion. Social Institutions remained a macrodevelopmental or evolutionary course but with more detailed specification than heretofore. Except for very minor modifications and a sabbatical in 1910-11, these three courses were taught by Emerson annually for the next twenty-seven years until his retirement in 1924.

Upon Emerson's retirement a Professor Gifford was listed as "standing in pending the appointment of a Professor of Sociology." No such appointment was made much to the chagrin of Emerson. Professor Gifford, then, substituted a course in Social Ethics "applying psychological knowledge and ethical principles to the regulation of social life" for Emerson's Social Theories course; Social Psychology for Emerson's Industrial Era course and retained only parts of the Social Institutions course, renamed Development of Society. Professor Gifford, founder of Vermont Children's Aid Society, taught these courses in the Philosophy and Religion Department from 1926 to 1946 with the exception of Social Psychology which was transferred to the Psychology Department in 1945. Sociology had lost its independent status in the Arts and Sciences curriculum at UVM, and was essentially reduced to one or two courses taught by various members of the Philosophy and Religion Department without Ph.D. training in sociology until the arrival of Arthur K. Davis in 1955. UVM was one of the last colleges or universities in the U.S. to grant sociology Departmental status. This came only in 1958 with the establishment of the Sociology and Anthropology Department and the appointments of Paul Oren and Fred Maher. Anthropology and Sociology became independent departments in 1972 and each has grown in the strength and the vitality exemplified by Emerson's early pioneering efforts of a century ago.