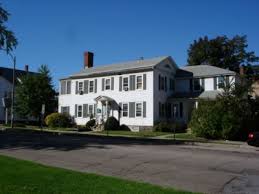 The Benedict House, located at 31 South Prospect Street facing the University of Vermont Green, was home to a number of influential men in Burlington throughout the nineteenth century. Judge Daniel Farrand came to Burlington after a failed congressional campaign in Bellows Falls, Vermont and built the Federal style home in 1809. [1]   Judge Farrand remained heavily involved in politics throughout his career in Burlington serving as a Speaker of the House of Representatives between 1798-99 and later serving a two -year term as a Vermont Supreme Court Judge in 1813. [2] His influential status can be seen in an 1817 speech given by United States President James Monroe for which Farrand personally addressed Mr. Monroe on behalf of the people of Burlington, and was chosen to formally introduce the President to the public in July of that year. The Farrand family remained at the residence until 1829 when it was sold to George Wyllys Benedict in 1829. [3].

George Wyllys Benedict graduated from Williams College in 1813. [4] (Portrait on left, courtesy of Special Collections Library). Benedict came to Burlington in 1825 after being appointed Professor of Mathematics and Physics and eventually went on to become a professor of chemistry at the University of Vermont as well. After buying the residence at 31 South Prospect from Judge Farrand’s Widow for the sum of $1,300 dollars, he and his wife Eliza raised six sons within the home. [5] G.W. Benedict was best known for his twenty plus year dedication to the revival of the University of Vermont. He encouraged the further development of the Medical College and tried vigorously to found a museum of Natural Sciences within the campus.

[6] Having arrived at a time when the student enrollment was minimal and the Institution was struggling to survive, Benedict’s 1829 “Exposition of the System of Instruction and Discipline” offered his educational standards and visions for the future of the University. These visions were very much supported by the University of Vermont President at the time, Rev. James Marsh. [7] During the 1830s G.W. Benedict also served as interim President, further showing the influence he had at the University. [8] George W. Benedict was also a very active businessman and member of the Republican Party within the city and state. After resigning from the University in 1847 after more than two decades of service, Benedict formed a business partnership with Ezra Cornell who would later found Cornell University, together they started the Vermont Boston Telegram Line. The first of its kind in the area, Vermont Boston Telegram had lines extending to Montpelier, Montreal, New York and the state of New Hampshire. [9]

In April of 1853 George W. Benedict purchased the Burlington Free Press and became the editor-in-chief. [10] With the creation of the telegraph line, the weekly paper was developed into a daily edition. (A Free Press ad from the 1866 Burlington City Directories, seen on left.) His ties to the University of Vermont remained strong even after the retired from teaching. During the Semi-Centennial Celebration of the University in 1854 President Wheeler delivered a discourse that stated "In August 1847 Professor George W. Benedict resigned his position as Professor....... He had stood by the smoldering ashes of the first college building, He had been the most active and energetic man in complete the new. He was teacher, he was agent, he was superintendent.......He  was appointed treasurer, and brought light out of darkness and order out of confusion. He planned in a comprehensive manner for the University and he spent time and money and strength, without stint, for its interests. Grateful feelings are due to him from every alumnus and from every friend of education in the state.” [11]

In 1857 G.W. Benedict received a Doctorate of Law from the University and practiced law alongside his son George G. Benedict at an office on Tuttle Street in downtown Burlington. [12] George Wyllys Benedict remained a prominent figure at the university and within the City of Burlington throughout the remainder of this life. George Greenville Benedict was born in Burlington as the second son of George W. and Eliza Benedict and eventually resided in the house after his father’s death in September of 1871. [13] (Portrait on left, courtesy of University of Vermont Special Collections Library.)

After graduating from the University of Vermont, George G. Benedict taught in New York for a few years before returning to Burlington to work as President of the Vermont Boston Telegraph line, as well as working at the Burlington Free Press. [14] In 1862 he enlisted as a private in the Army during the Civil War, even fighting in the Battle of Gettysburg in 1863. He was given the rank of Colonel in 1866, and was later rewarded a medal of honor by Congress for his bravery. [15] George G. Benedict returned to Burlington and was appointed editor-and-chief at the Burlington Free Press. [16] Like his father had been before him, he was elected as a Vermont State Senator from Chittenden County in in 1885 and again in 1866. [17] Looking through the City directories, G.G. Benedict held a number of important position in the City of Burlington such as School Commissioner 1869-70 [18] , Postmaster from 1871-73 [19] , and was even a Cemetery Commissioner for a number of years starting in the mid-1860s. [20]   As Cemetery Commissioner he helped raise funds for the 1873 erection of the Ethan Allen Statue at Green Mount Cemetery. [21] G.G Benedict was president of the Vermont Historical Society and wrote a number of books on the Civil War, most famously, the two-volume edition Vermont in The Civil War in 1888. [22] Both G. W. and   G. G. Benedict served as secretary of the Board of Trustees at the University of Vermont, the later serving a total of thirty-seven years. [23]

31 South Prospect Street remained in the Benedict family for over a century before the University of Vermont acquired it in the 1934. [24] The house was later divided into student housing and also was the location of the History Department for a number of years, later being used for administrative offices. [25] Over the years many changes to the interior floor plan have occurred, rooms have been divided and hallways made narrower, making it much more difficult to determine what areas are characteristic of the original Federal Style structure. Today the Farrand-Benedict house is home to the University of Vermont Sociology Department, where it is used for classroom purposes as well as offices for the department's staff.