The cover of Andrew Buchanan’s new book World War II in Global Perspective, 1931-1953: A Short History (Wiley) features a photograph of Indian soldiers riding on a tank, flanked by a bull elephant which is likewise serving as a form of military transport.

It neatly encapsulates the clash of cultures and ideals during World War II, which Buchanan invites us to view in a broader context than the 1939-1945 period usually recognized by history texts as the chronological boundaries of the conflict.

“Students actually helped in selecting the photograph,” Buchanan says. “I presented one of my World War II history classes with several options and this is the one that received by far the most votes. It was a direct product of teaching.”

A senior lecturer of history at UVM with a specialty in U.S. foreign relations and global history, Buchanan tries to draw broad connections between social, military and economic history to bring the sprawling conflict into tighter focus.

“What I thought was lacking in existing textbooks on World War II were also the things students in my classes were interested in talking about. For instance how did the war effect sub-Saharan Africa, or Latin America? To write a book that answers some of these questions means broadening the geographical scope to make it a really global topic. It necessitates expanding the temporal framework as well.”

While no military campaigns took place in South America, the continent was deeply affected by the disruption in trade caused by the trans-Atlantic war.

“There was a great deal of commerce between South America and Western Europe. Germany and Italy were looking to invest capital. But when the war broke out, all of this collapses. The big beneficiary was the United States, which became the principle trade partner with Latin America during the war.”

The book’s 1931 starting point covers the Japanese invasion of Manchuria, which ignited a conflict in China that didn’t end until the late 1940s when Mao’s communists emerged victorious over Chiang Kai-shek’s nationalists in the Chinese Civil War. Buchanan points out that Western histories of the Pacific war tend to start at Pearl Harbor, but that the Japanese quest for empire began well before the surprise attack December 7, 1941.

“By 1941 the primary concern of the Japanese was to finish the war in China,” he explains. “The only way they could achieve that was to move into British, French and Dutch colonial territory. And the only way to do that was to fend off the American fleet in the Pacific. The naval battle against the Americans wasn’t peripheral, but it was just one part of a larger strategy for Japan to obtain the raw materials they needed to build their military and their economy.”

The chronological endpoint of Buchanan’s book is the Korean War from 1950-1953. It’s not a direct extension of World War II, he argues, but it is a major conflict in the bi-polar world that emerged after 1945, when the Soviets in the East and the Americans in the West competed for dominance.

Buchanan gives the “Big Three”—Churchill, Stalin and Roosevelt (and later Truman)—their due during the historic conferences at Yalta, Tehran and Potsdam, but he gives more time than most historians to the Bretton Woods Conference in 1944, which set the stage for the post-war economic order which was decidedly in favor of American interests.

“When we’re not reflective, we tend to think of ‘things as things’—that ‘World War II’ is a finite period with a clear beginning middle and end,” Buchanan says. “But it’s not a ‘thing’—it is a series of processes and relationships that really do encompass the whole globe.”

Kevin Coburn
“What I thought was lacking in existing textbooks on World War II were also the things students in my classes were interested in talking about. For instance how did the war effect sub-Saharan Africa, or Latin America?" - Andrew Buchanan 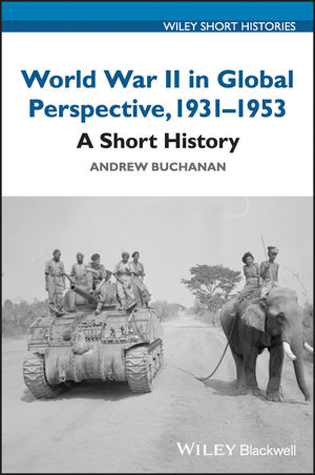