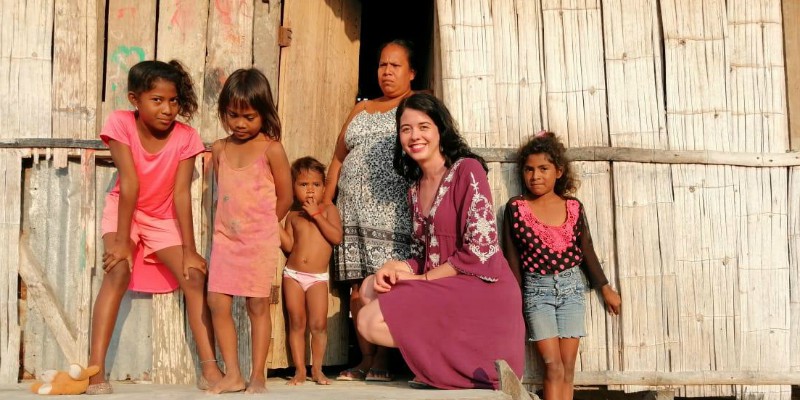 Tilden Remerleitch first met Carmen Mendoza (standing in doorway) and her eight children living in an abandoned school along the Ecuadorian coast. Mendoza was one of the first of many locals Remerleitch interviewed who lost their homes to a 2016 earthquake. Later in her stay, Remerleitch managed to arrange relocation of the family to a new bamboo house constructed by members of the Roots Foundation.

Tilden Remerleitch’s formal title—National Geographic Explorer—is an apt description for her persona as well as her work. Remerleitch ’18 has lived and worked in Asia and South America and is fluent in Spanish and Mandarin. Since graduation she's spent most of her time in Ecuador, recording the personal testimonies of the people affected by natural disasters long after the microphones and TV cameras of major media outlets have departed to cover some other global catastrophe.

The result of her exploration is an 18-episode bi-lingual podcast “Forces That Move Us,” focusing on the displacement crisis in Ecuador caused by a 7.8 magnitude earthquake that hit the country in 2016.

“I tried to capture the voices of people who have faced environmental displacement and, despite the odds, found unique solutions outside of the mainstream to restart their lives,” she explained.

The podcast covers her journey from the Ecuadorian coast, the epicenter of the quake, to the interior highlands, to the Amazon River basin. She meets extraordinary people along the way—like a couple who used bamboo, a cheap and renewable building material, to house thousands of people left homeless by the disaster, and a woman who created a new kind of relief camp that helped 37 families restart their lives.

The podcast also records Remerleitch’s inner journey as she struggles with the tension between the roles of journalist and aid worker, and considers how relief organizations could improve outcomes by emphasizing long-term development over temporary aid.

“As a Western white woman I was really sensitive to telling stories of people who live in an entirely different cultural context,” Remerleitch said. “Vicky helped edit the podcasts so that the Spanish version fully resonates with the Latin American audience.”

Meeting those left behind

A geography major at UVM, Remerleitch honed her journalism skills through creating a six-episode podcast “Grounded” for her senior honors thesis project. It was an outgrowth of her work with Professor Pablo Bose, who does extensive research on the local refugee population. “Grounded” featured stories of immigrants from around the globe who found their way to Vermont.

“It made me wonder about the people they left behind. What were their stories and why did they stay?” Remerleitch recalled asking. “Then, I learned that people who flee their country because of environmental displacement don’t receive the same protections or international assistance as those who depart because of war and conflict. This didn’t make sense to me, so I wanted to learn more,” she said.

A National Geographic Society Early Career Grant funded the first year in Ecuador, exploring how natural disasters, climate change and resource extraction alter the relationships between people and place. A second grant helped her prolong her stay, and allowed her to take graduate courses in audio editing at the University of California, Berkeley.

A new kind of Refugee Camp

In episode 2 of her podcast Remerleitch introduces listeners to Sarah Hanen Bauer of the Tierra Madre Project. The coastal town of Canoa, just south of the epicenter, lost 85% of its infrastructure. Hanen Bauer recognized the government response was inadequate to meet the staggering number of homeless people.

Flimsy tents issued by the authorities to families living in large camps were inadequate protection from the weather. The camps were short of fresh water and lacked basic sanitation, but having nowhere else to go, some inhabitants had lived there for years.

Starting with a few dry toilets and water filters, Hanen Bauer established an alternative relief camp on two hectares of land outside town that had once been a pumpkin patch.

“We weren’t here to give handouts,” Hanen Bauer tells podcast listeners. “Residents had to be part of their own solution.”

A sort of “pop-up” community developed with camp members sharing basic duties. They built a community center and shelters, then developed a set of rules—pets OK, and no curfews, but no motorcycle riding in the camp and no drinking.

Members could buy products they needed at a camp commissary, which stocked donated goods from cans of tuna to diapers. Hanen Bauer brought in local experts to teach workshops on auto mechanics, carpentry, and artisan work, so community members could build job skills. She also recruited volunteer counselors to help residents work through the mental and emotional effects of their ordeal.

Remerleitch arrived after the camp had disbanded—a reflection of Tierra Madre’s success. She was impressed that the camp was organized by ordinary citizens without a background in relief agency work.

“With guidance from the outside, people turned a pumpkin patch into a community that lasted until the residents were strong enough to reimagine home in a new permanent place.”

Further north on the Ecuadorian coast, Remerleitch interviews Christina Latorre and Manuel Pallaras, a couple from the capitol city Quito.

When the earthquake hit, they sent bamboo harvested from a family-owned plantation to coastal residents who lost their homes, but learned that the first improvised shelters collapsed with the first rain. “We realized people didn’t know how to build with bamboo—we had to physically go to the place and help them out,” said Pallaras.

The couple brought in carpenters and architects and constructed a model house in one day. On the second day, they made modifications and standardized the procedure so the process could be easily replicated. The bamboo houses cost about $2,800 each to build, compared to the $10,000 price tag for government built concrete homes—the same type of construction that fared so poorly in the earthquake.

“Bamboo is native to Ecuador—it grows fast and it’s easy to harvest,” reports Remerleitch. “Also it is anti-seismic—it has enough flexibility to withstand earthquakes.”

“We didn’t spend months drawing up design, we just built it,” said Pallaras. “Christina calls it a ‘do-tank’—we just did it and didn’t look back.”

Soon an improvised factory was turning out 20 prefabricated homes per week. As the volunteer organization grew, Latorre and Pallaras established Roots Foundation which continues to build sustainable homes years after the earthquake hit.

In later episodes Remerleitch and her listeners travel to communities in the Ecuadorian Cloud Forest, where local activists have been battling the damages of open copper mining for 25 years, and the Amazon River Basin, where indigenous groups are fighting the damage to their ecosystem from climate change.

Remerleitch returned to California this spring to edit over 400 interviews. Her partner Victoria Castro was scheduled to record the episodes in a Quito studio. Then the COVID-19 pandemic hit.

As she tried to keep focused on wrapping up the show, Remerleitch realized the stories of resiliency she had recorded were exactly the types of stories she needed to hear in a time of quarantine. “The voice of my past self, recorded in my podcast narrations, gave my present self the exact words of inspiration and courage I needed to hear. It was honestly bizarre!”

Remerleitch felt badly that she couldn’t return to Ecuador, but Castro managed to find alternative recording arrangements (a relatively quiet closet in her apartment building) and “Forces that Move Us” is now available for listening at no cost on iTunes and Spotify in both Spanish and English.

With her grant support ended, Remerleitch is looking for work in the San Francisco Bay area while creating a new podcast on local youth refugees.

“My goal is to tell authentic stories which means allowing people to talk about their experience in their own words. So I’m continuing to try to make storytelling a process of crafting and putting the story into radio form. Looking back on my last experience doing this at UVM, I can see how far I’ve come.”

Kevin Coburn
“I tried to capture the voices of people who have faced environmental displacement and, despite the odds, found unique solutions outside of the mainstream to restart their lives." -- Tilden Remerleitch '18 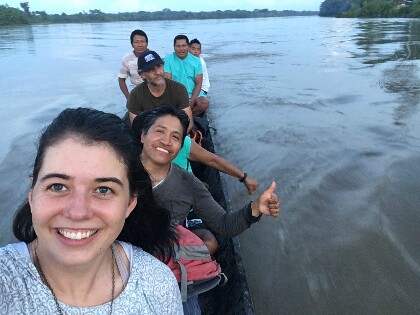 Remerleitch’s search of stories of displaced people in Ecuador took her from coastal villages, to the mountains of the Cloud Forest, to the Amazon River basin. 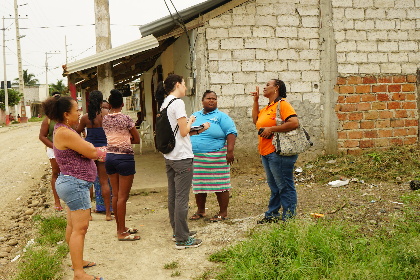 Remerleitch interviewing women in the city of Esmeraldas who lost their homes in the 2016 earthquake. Esmeraldas, the only Afro-Ecuadorian majority providence in Ecuador, was among the areas hit the hardest by the quake.