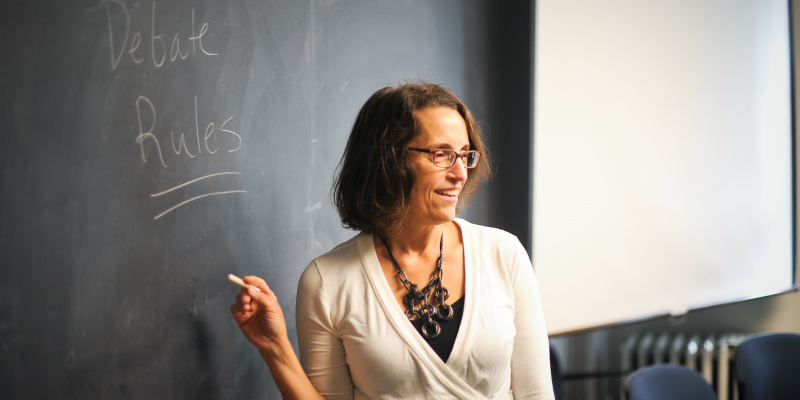 Kathy Fox, professor of sociology and director of the new UVM Liberal Arts in Prison Program (LAPP) administered by the College of Arts and Sciences.

When sociology major Emily Fixx ‘17 arrives for her 6 p.m. class on Monday, she leaves her keys, cellphone, and water bottle at the door and walks through a metal detector under the watchful eye of a correctional officer. This is not part of an extreme new measure to remove distractions from the classroom. It’s part of the routine for Fixx and 11 UVM classmates who are taking a justice course this semester along with eight inmates at the Chittenden Regional Correctional Facility in South Burlington.

“When you get inside the building, you notice that the next door never opens until the door behind you closes,” Fixx said. “That’s the worst moment—you have a sense of what inmates go through every day, this sense of closure, of doors shutting behind you.”

Opening doors, for UVM students and their counterparts in the prison, is the impetus for the class taught by Kathy Fox, professor of sociology and director of the new UVM Liberal Arts in Prison Program (LAPP) administered by the College of Arts and Sciences. It is the first time in Vermont that undergrads and inmates have taken a course together on the “inside,” and it represents the first step in UVM’s participation in the renowned Consortium for the Liberal Arts in Prison. The initiative began at Bard College in 1999 and has expanded to include Goucher College, Grinnell College, Notre Dame, Wesleyan University and Dwight Hall at Yale University.

The consortium has developed a rigorous national standard for prison education that combines attention to developmental skills with challenging college study, and UVM is the first public institution, and the first land-grant university, to join the initiative. Program details are still being developed with the Vermont Department of Corrections; the tentative plan is for LAPP to begin offering courses to qualified prisoners beginning in the spring 2018 semester.

“Higher education can change the equation for motivated prisoners who otherwise have few career choices when they are released,” said Fox, who has completed extensive research on the principles of restorative justice in offender reintegration.

“I’ve been very impressed with the number of smart people in prison—they work hard not just because they see education as important, but because they crave doing something meaningful with their time and bettering themselves,” she said.

Fox is a big believer in experiential learning, and bringing her students into the prison provides them with a first-hand look at life on the inside.

Sociology major Sarah Bull ’17 is Fox’s teaching assistant for the course. In addition to the Monday class, she spends an hour each Wednesday evening in the facility meeting individually with classmates to answer questions and to help them with assignments.

“One of the ladies tells me every week how empowered she feels to be part of the class,” Bull says. “She understands we’re not going in just to ‘study’ them—that we’re learning as much from them as they are from us. She tells me she appreciates the fact that we’re using their perspectives to improve a system where she feels she has no voice.”

Bull credits Fox with creating a learning environment that puts all students, as much as possible, on a level playing field. The class usually sits in a circle, with UVM undergrads and students from the prison seated next to each other. In small group assignments, students from “the inside” and “the outside” work together. For one of the few times in their weekly routine, a uniformed officer is not present in the classroom, so inmates feel free to open up about their experiences in incarceration.

Bull doesn’t believe a college-level education for prisoners is a silver-bullet solution that will pave the way for easy re-entry into society—she thinks more resources for institutional housing for prisoners after release is another critical piece in reducing recidivism. But she believes the coursework gives students a sense of dignity and purpose, and an opportunity to build skills for successful re-entry after their release.

For Baird Parent ’17, a sociology major with an interest in criminal justice policy, the hardest part of the class is leaving. “You know you’re free to head to the corner store to pick up a candy bar. Then you realize the people on the inside can’t do even those simple things we take for granted.”

A white male from central Connecticut, Baird says the class has given him a deeper sense of gratitude for the advantages afforded by his race and socio-economic class. But he’s struck by the inequity of the criminal justice system, which tends to become a repository for poor racial minorities.

“There are people in my life who’ve been arrested for drug crimes, but got off due to good legal representation,” he said. “I look at some of these people in prison and think ‘well, they made a mistake.’ But they got stuck in this vicious cycle of addiction and reoffending, and they don’t get the education they need, or the help with addiction problems that got them in trouble in the first place.”

Mychaella Devaney ’17 is another UVM course participant who is completing an internship at the Woodside Juvenile Rehabilitation Center in Burlington. A psychological science major, Devaney is interested in exploring the intersection between criminal justice, psychology and law.

At the end of a recent class, Fox took a moment to go around the circle and asked each person to say one or two words about the how the class made them feel.

“The women inside used the words empowered, hopeful, enlightened, motivated, resilient, and grateful,” she said. “I think we were all pretty blown away by the power of those interactions.”